Unusually, the FIA report into the number of Power Unit elements used by each driver has not yet been published as I write this on the Friday before the race (it is normally issued the day prior to Free Practice 1).  The report issued on the Wednesday prior to Monaco is here: 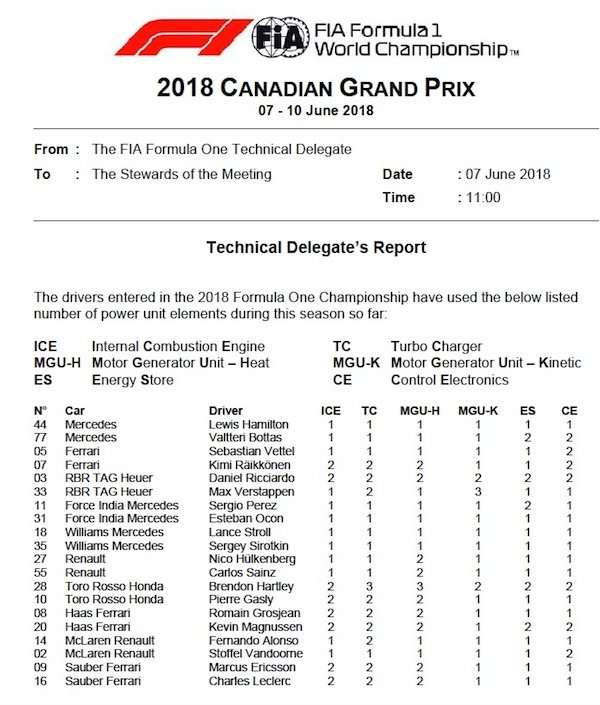 Looking ahead to Canada, this is the seventh race of the season, and if the twenty one races were to be divided evenly between the three ICE, TC and MGU-H available to the drivers, this should be the final race for the first of these elements.  However as the above report shows, several drivers have already needed to fit new components.  Also Canada is a power circuit, and the Power Unit Manufacturers were targetting this race to bring their first updates, where the extra power would be an advantage (the older specifcation elements ccould then be used in the Free Practice sessions on the Fridays, to limit the mileage on the updated elemennts).

As reported yesterday, Mercedes has found some issues with theeir planned upgrade, and so aren’t brining it to Canada.  Instead they will work on the solutions and field the updated elements at the next race.   Of the Mercedes powered drivers, only Valtteri Bottas has needed to replace any elelment of his Power Unit (a second CE and ES following his crash in Australia).  Mercedes haven’t said whether the original components can be reused.  Overall, Mercdes are in good shape to get through the season without attracting grid penalties, although they may struggle this weekend if others have significant power updates.

The four Ferrari customer teams fitted new ICE, TC and MGU-H at Monaco.  These were original specification units, and looked to be a planned replacement.  Quite why it was necessary to fit these new parts on perhaps the least power demanding circuit on the calendar is unkown.  Sebastian Vettel is still on his original components, so it shouldn’t be due to reliability.  It does mean however that the customer teams will have to use the older specifcation elements for much longer than the works drivers.  Kimi Räikkönen fitted his second ICE, TC  and MGU-H in Spain, so he may be in a similar position to the customer drivers if he is to put off grid penalties.  Sebastian Vettel’s use of a second CE should not cause any concern as these elements have been reliable in the past.

With Max Verstappen already receiving a grid penalty in Monaco, it is worrying that Daniel Ricciardo is guaranteed to pick up at least a ten place penalty in Canada following his MGU-K failure in Monaco, as a new one will be his third.  Only fitting  a third ES or CE will add to that penalty, as he can take a third ICE, TC and MGU-H without further penalty at this race.  Renault are bringing an updated Power Unit to this race, so he may fit a complete new unit, although it would almost guarantee further grid penaltie later in the season.  The other Renault powered teams are better off in terms of their useage of Power Unit elements, but the MGU-H failures that the works team suffered earlier in the season make me concerned that they too will pick up grid penalties before the end of the year.

Honda started the season with very poor reliability, such that they are going to get grid penalties at some point through the year.  Relaibility has been better recently, particularly for Pierre Gasly.  However with an updated Power Unit available this weekend, expect grid penalties for Brendon Hartley although Gasly should escape this weekend without penalties.

You have the incorrect one up

As the article says, this morning when this was written the report for Canada wasn’t available. It is now, here:

Before Free Practice 1, a lot of new Power Unit elements were fitted. The details are here: https://www.fia.com/file/69170/download?token=GnTPXXO_ All Ferrari, Renault and Honda powered drivers have now used at least two ICE, TC and MGU-H with the Honda and some Renault powered drivers having used all three they are allowed for the season. This means that we will see some grid penalties this year, and it may be enough to eliminate Ricciardo as a serious championship threat (unfortunately). Mercedes had planned to fit their updated PU this weekend, but put that off due to reliability concerns. So the fitting of… Read more »

Thanks Dave, it looks like we have a similar assessment of how the p.u reliability is progressing, and likely to affect the championship race. From qualifying, it looks like a 7th race Mercedes is still on par with a new upgraded Ferrari, but an upgraded Renault is worth a couple of tenths. Your observations on Ferrari imposing a p.u change on their customers, and the financial constraints on the Mercedes customers are very interesting. Its difficult to see what benefit Ferrari get by impeding their customers like that. Those Teams aren’t a threat to the factory team, and I’d imagine… Read more »