Power Unit Use – Update before China

Despite the reduction in number of available elements for this season, teams have already started to change some of the components on their Power Units. As a reminder, each Power Unit comprises six different elements:

Whereas last season each ddriver was allowed to use four complete Power Units before any grid penalties applied, in the 2018 season the number of Power Unit elelments has reduced.  In the case of the ICE, TC and MGU-H three of each are allowed.  While for the MGU-K, ES and CE only two of each can be used before grid penalties are applied.  As in previous seasons, the first time an additional element is used a ten place penalty applies, and for the second and subsequent additional elements from that Power Unit, a five place grid penalty applies.  What is different from previous seasons, is that if a driver gets more than a fifteen place grid penalty, then the driver will start at the back of the grid (if more than one driver has to start from the back of the grid, they will be arranged in the order the offences applied).

On the Thursday of each race weekend (Wednesday in Monaco), the FIA issues a document stating the number of Power Unit elements that drivers have used so far during the season.  The report issued today is reproduced here: 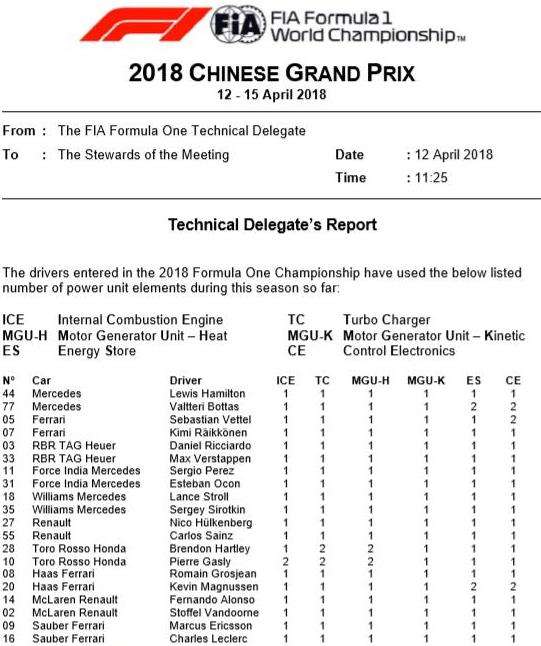 As you can see, a quarter of the grid has already needed to use elements from their second Power Unit even though we are only two race in to a twenty one race season.

Valtteri Bottas replaced his ES and CE following his qualifying accident in Australia, to reduce the risk of failure in the race.  The first elements would have been tested back in the factory and can be re-used provided they are undamaged.

Sebastian Vettel changed his CE after qualifying in Bahrain, the element that was removed would have been tested in the factory and may possibly be re-used later in the year.  However some fault must have prompted the change as Vettel didn’t have the accident damage that caused the Mercedes change of components.

Both Toro Rosso’s had new TC and MGU-H fitted for the start of the weekend in Bahrain.  These were a different specification to improve performance and increase reliability, prompted following Pierre Gasly’s retirement in Australia where a failing TC and MGU-H caused the ICE to fail.  It looks like Honda are already planning to take tactical grid penalties in order to continue to catch up on performance and reliability.

Kevin Magnussen had his second ES and CE fitted before the Bahrain race, so perhaps there is a potential issue with the Ferrari reliability in this area?

Honda have definitely indicated their intention to keep developing their Power Unit as fast as they can to catch up with the rest.  Both Mercedes and Ferrari have had to change ES and CE on some of their cars.  As these are some of the elements with the fewest number allowed, this could potentially signal an unwanted facet of the championship fight.  However, historically these have been the most reliable elements within the whole Power Unit, so it is entirely possible that a single item could last the entire season if required to.

Getting a bit confusing even if its just the start of the season. first read on another web-site:-“Rogro = 2 ice, 2 turbo, 2 mgu-h. Gasley 2 turbo, 2 mgu-h and no mention of a new ice. Then on another site, 13/04/2018 05:18:-“electronic failure in Bahrain, Renault revealed a damaged ES and the need for replacement as well as new CE”. “We’ve got the second one, if we do it again then we’ve got a penalty, commented Recciardo”. “TWO (2) have to last the year and one (1), I believe, is in a bin in Bahrain, we survived with one… Read more »

The FIA report is the definitive list of the elements used (fitted to the car when it left the pit lane). This report covers the period up until the end of the Bahrain race, as it was issued prior to any running in China.
There are separate reports issued after each practice session and qualifying that indicate if new elements were fitted for those sessions. The report of new parts fitted in parc ferme covers if new elements are fitted before the race.

You are of course right about the Rici car but the well known site that pushed out the Rogro power unit elements list and the Gasley list did so in a photo copy of the FIA PU ELEMENT REPORT. At least that is what I was reading, went over it several times to believe what I was reading. this was two days ago.

Dave. you don’t have to worry yourself sick about the number 5 SECOND CE PU ELEMENT as it has past all check-up tests and been pushed back into the PU
ELEMENTS POOL. But me still waiting and searching for any news as regards number 77 PU elements testing results.

Am i correct in assuming that this current allocation is going to remain until end of 2020 season?
So this is the ‘end goal’ that the p.u designers have been working towards with these hybrid units.

Yes power unit number of elements per driver is an allocation for the whole season.

Sorry for not explaining myself badly “I believe that the three engine rule will go to 2020”.

Maybe it isn’t just Honda who are planning to take tactical grid penalties?