Power Unit Use – Update before China

With this being the third year of these hybrid power units, I had hope that I would not need to keep track of the components used by each driver during the course of the season due to ever improving reliability.  However, despite each driver getting an extra complete Power Unit (Internal Combustion Engine – ICE, Turbo Charger – TC, Motor Generator Unit Heat – MGU – H, Motor Generator Unit Kinetic – MGU – K, Energy Store – ES and Control Electronics – CE) as the number of races has increased to 21, it is looking like some drivers will use more than there allowance of five complete Power Units for the season.

On the Thursday of each Grand Prix Weekend, the FIA issues a report which details the power unit elements used during the season so far.  This weekend’s report is below: 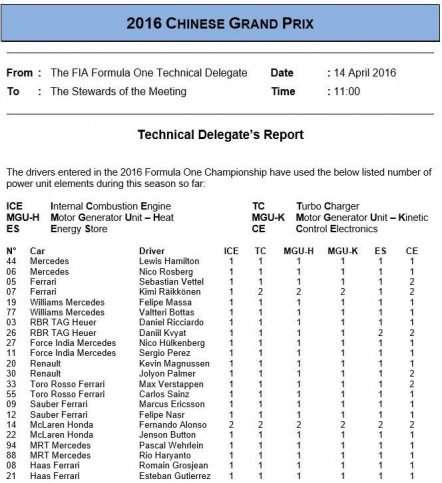 This report covers the units that were used up until the end of the Bahrain Grand Prix, but doesn’t include any new components that will be needed for Sebastian Vettel and Jenson Button following their failures before and during the race respectively.  What is worrying is that after just two races, both works Ferraris have needed to use a significant number of PU components, and that one of their customer drivers (Max Verstappen) is already on his second CE.  Both McLaren’s have also used a significant number of PU components, and half of the Renault powered drivers (Daniil Kvyat and Jolyon Palmer) have needed new CE and Kvyat has needed a new ES.

While no one is remotely near a grid penalty yet, but with five units to last 21 races, each component has to last for more than four race weekends.  To have so many failures after just half that number is concerning.  Once again it is just Mercedes that have yet to suffer any premature failures, while Honda are continuing as the least reliable PU manufacturer.  Renault currently may be moving ahead of Ferrari in the reliability stakes (if not in outright power).  This may cause Haas and Sauber some issue later in the season, as they are likely to stick with this initial specification of PU for longer than the works team as the units are developed.  Toro Rosso with the 2015 unit may possibly be better off, but last year’s Ferrari did suffer with reliability issues.  I am assuming that the TAG Heuer in the back of the Red Bull is the same specification as the Renault in the works team, but this may not remain so as the PU is developed through the season.

When it comes to in season development of the Power Units, each manufacturer had a total of 32 tokens to spend in development terms since the end of last season.  Over the winter the tokens spent were as follows:

While Renault have a significant number of tokens to develop their PU, they may be able to make some progress in catching Mercedes, while Ferrari have already spent the majority of their available tokens.  However last season Renault only brought any development in the last few races (and even then it was only tried at the US Grand Prix, before Daniel Ricciardo reverted to the previous specification.  Because of the limit of 5 PUs for the season, I would expect the developments to first appear for the fifth or sixth race.  However with the failures already experienced, it may delay the introduction of the updates to Honda, Ferrari and Renault.  This could hand a further advantage to Mercedes.

Both Button and Vettel have taken their second ICE, TC, MGU-H &.MGU-K to replace the components damaged in Bahrain.
Palmer has used his second ES, while Hülkenberg and Magnussen have used their second CE. For the Force India driver this is significant as it is the first Mercedes component that has needed replacing. Although historically neither the ES or CE have presented reliability worries to anyone other than Honda.

So much for the CD not causing any reliability concerns, Kvyat has taken his third unit before qualifying.

Also, after Hamilton’s issue that prevented him recording a lap in qualifying, it was reported on C4 that he would take a complete new Power Unit ahead of tomorrow’s race. Could Mercedes be finally suffering some reliability issues after being put under some pressure by the other manufacturers?

The thing I find funniest (read: most infuriating) about this is that the FIA produces such a value-less report on the thursday before the race. It has no value to the teams, because it comes out way to late, and they probably keep track of this sort of thing on their own anyway, as it could potentially play into their strategies. And it has no value to the fans because it doesn’t give us any more information about the upcoming race. If it came out the Monday after a race it would at least have the value of being an… Read more »