As we come up to the halfway point of the season, Germany being round eleven of the twenty one race season, the FIA today published the Power Unit (PU) elements used so far in the season: 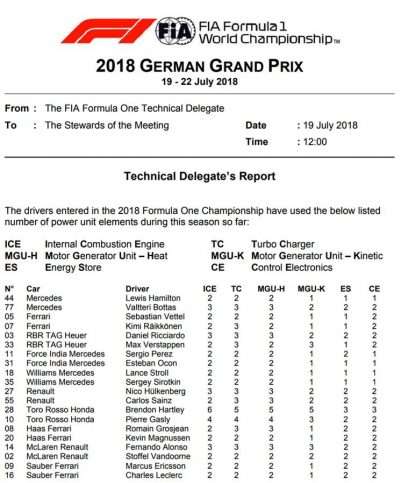 Several new elements were used last time out at Silverstone.  Before Free Practice 1 started on the Friday morning Valtteri Bottas had fitted a third Internal Combustion Engine (ICE), Turbocharger (TC) and Motor Generator Unit – Heat (MGU-H).  He also fitted his second Motor Generator Unit – Kinetic (MGU-K).  As can be seen from the FIA report, he has now used his complete allowance of Power Unit elements for the season.  If the PU used in Austria proves to be unusable following its unplanned shutdown, then he will likely get grid penalties later in the year.  Even with Mercedes reliability it is unlikely that they could make a PU last for twelve races.

Nico Hülkenberg fitted his third ICE and third TC.  Like Bottas, he has now used all his available PU elements, and similarly it is likely that he will be getting grid penalties before the end of the season.

Other new elements fitted in FP1 were a second Energy Store (ES) and Control Electronics (CE) for Romain Grosjean, and a second ES for Charles Leclerc.  All four customer Ferrari drivers have now used both of the available ES and CE available for the year.  As I have mentioned in previous articles, these have historically been the most reliable of the six PU elements, so are the least likely to cause the drivers penalties.

No new PU elements were needed for Free Practice 2 on the Friday afternoon, but Fernando Alonso fitted his third ICE and MGU-H before Free Practice 3 on Saturday morning.  This takes Alonso to his full complement of PU elements, and means he is highly likely to require grid penalties before the year is out.

Following Brendon Hartley’s dramatic crash in FP3, his car needed to be rebuilt around a fresh chassis.  Toro Rosso took the opportunity to fit a new ICE (number six) and new MGU-K (number 5).  This meant that he picked up grid penalties for yet another race.  Honda didn’t elect to fit a complete new PU as he was already starting from the pit lane, this would not have further compromised his race.  The fact that Hartley has now used six of the available three ICE in less than half the season makes a mockery of Christian Horner’s statement that they won’t sacrifice Toro Rosso in order to allow Honda to develop.  I think it has been clear for some time that Honda has pushed forward with PU development at the expense of individual race starting positions. 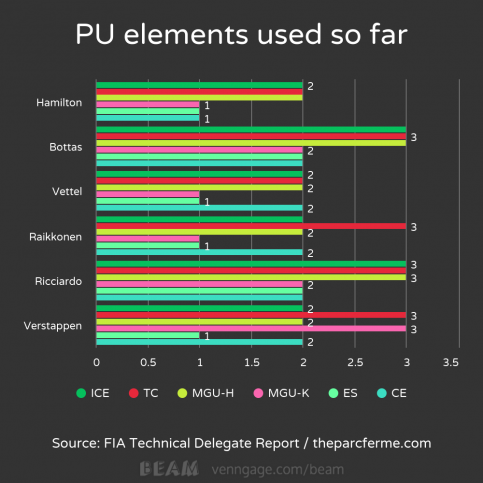 Two other drivers have also used all their available PU elements: Pierre Gasly hasn’t quite used the number of elements of his team mate, but with four ICE, TC and MGU-H and three MGU-K he has already picked up grid penalties and will receive further ones before the end of the year.

Daniel Ricciardo is however the driver most likely to start the race in Germany from behind where he qualified.  He has already used the maximum of each PU element, and for reliability reasons will need to fit his next ICE, TC and MGU-H at this race or the next.  As the Hungaroring gives Red Bull a better chance of a good result (being less power dependant) it is forecast that Ricciardo will fit the new elements this weekend.

Overall, Ferrari are the only manufacturer where no driver has used his full complement of PU elements.  It would appear that not only have they caught or passed Mercedes in power output, but they are also making significant progress in reliability.  Importantly for the drivers title, the two lead protagonists (Sebastian Vettel and Lewis Hamilton) are on track to complete the season without grid penalties.

Well, Daniel Ricciardo will start the race from the back of the grid after fitting his third MGU-K, ES and CE before FP1. The team have yet to decide to fit the other elements of the PU, even though they would not incur any further penalty (and he would need these to get to the end of the season). They may fit them tomorrow, to minimise the mileage on them before the race. Max Verstappen has fitted his second ES, which is on schedule as this is almost halfway through the season. Similarly the works Ferrari pair have fitted their… Read more »

I like your graphics, much better than the FIA provided sheet.

I was thinking Lewis May take the opportunity to get some components in, but 14th isn’t all that bad a starting position if he can make it through turn 1 ok. Is there any scenario that Lewis would benefit in taking any new components?

Hamilton has one complete PU left within his allowance for the year. Taking this (or any element of it) early would be a disadvantage. He would not then benefit from any development that Mercedes made later in the year.