Power Unit Use – Update before Germany

The FIA report into the Power Unit elements used prior to the Hungarian Grand Prix is as follows: 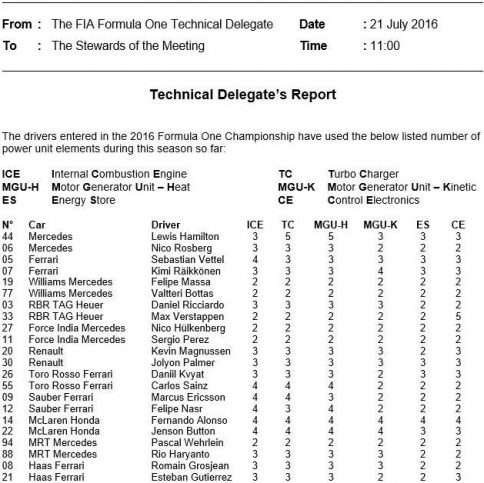 This differs from my last report in that Fernando Alonso has used a fourth ICE, TC and MGU-H that had not been reported before.

Before Free Practice 1 on Friday, Max Verstappen fitted his third ICE, TC, MGU-H and MGU-K, this bought him in line with the other Renault powered drivers, although his third Power Unit is two races fresher than Daniel Ricciardo and Kevin Magnussen, and a race fresher than Jolyon Palmer.

Four other drivers fitted their third MGU-K at this time:

This looks to be a routine planned change of the component, leaving plenty of life left for the last half of the season.

Carlos Sainz also used a third ES and CE, again this looks to be routine changes.

Three other drivers alos fitted a third CE at this time:

Again, all very routine and planned.

Some drivers waited until Saturday before fitting their new components.  The following fitted their fourth TC:

As these were the fourth TC to be fitted it is likely that they will run out before the end of the season, which probably explains why they waited until Saturday before fitting them.  The same explanation could be used for those drivers who fitted their fourth MGU-H:

While the works Ferrari team have followed the normal pattern of changing the TC and MGU-H together, Haas have chosen to split theirs, while Marcus Ericsson is fitting the fourth MGU-H to match his fourth TC that was fitted in Britain.

The only other new component fitted on Saturday was a third MGU-K for Nico Rosberg.  Mercedes don’t seem to be short of components (except for Hamilton’s car and the TC and MGU-H), but I suppose they have a designated Friday Power Unit to keep the ones used for qualifying and the rae fresher.

As we are now over halfway through the season, it is surprising to me that so many drivers have still only used two of their allowed five Power Units.  While they may all be Mercedes powered drivers (both Williams drivers, both Force India drivers and Pascal Wehrlein) it does strike me that they are not making best use of the available power units.  What is even more surprising is that they have driven the furthest distances (km) so far this season, with only Wehrlein in the lower half of the field for distance covered (these are the distances of the car that is normally driven by that driver, so include Friday mileage by stand ins, and for Max Verstappen and Daniil Kvyatt include the distance the other driver covered in that chassis): 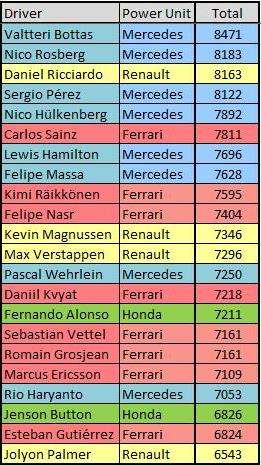 With both works Mercedes drivers having already fitted their third ICE back in Austria, it is unlikely that the team will introduce three more updates to their PU before the end of the season, however with 11 tokens left to spend this season they may well introduce one or two updates (as these will carry forward into 2017 unlike any chassis updates).

Ferrari only have three tokens left, so there is a limited amount that they could do, but some tweek is still possible.  Renault have stated that they will not be updating their PU even though they have 21 tokens left, the massive gains that they have made since the 2015 PU have been achieved with only 11 tokens spent (further proof that the regulations are not holding manufacturers back in their bid to catch Mercedes, it is just their lack of ideas on what to do to catch them).  Honda meanwhile have spent 22 tokens and so have 10 remaining should they wish to further their progress up the field (on a twisty track the McLaren’s have shown they are best of the rest behind Mercedes, Red Bull and Ferrari, on a power track they maybe a little further behind?).

With Mercedes no talking of loading Hamilton with enough PU elements to see him to the end of the season when they get to a suitable circuit where he can overtake from a pit-lane start, it will be interesting to see which race they choose.  To do this they would need to fit extra components on both Friday and Saturday (I wonder if Mercedes is well rehearsed enough to make a PU change between FP1 and FP2 on the Friday, as well as overnight?).

When drivers start taking these penalties, it will make these hybrid era ridiculous rules and The FIA look like a total joke. Driver will all take penalties together so someone who qualifies last probably end up on poll once all penalties are factored in. It’s gonna be as bad as the FIAs new stupid qualy format at the beginning of the year.

How long has Hamilton been using this current power unit? Will he be able to get away with only taking one engine penalty, or is he likely to need more than one?

Hamilton has used his fifth TC and MGU-H for three events (Austria, Britain and Hungary). It is likely that he will need at least two more of these elements to get to the end of the season. It is possible that a sixth set could be fitted on the Friday and a seventh set on the Saturday of the chosen race weekend. In this way he would only suffer one race with penalties, but would need to start from the pit lane.

As usual several drivers have used some new power unit elements this weekend, among them Marcus Ericsson has used his fifth and final turbocharger on Saturday and therefore in the race. This is very likely to result in a grid penalty before the end of the season. However in some good news for the Swede, it is unlikely to effect his starting position that much.