As is normal, theFIA issued their report into the Power Unit elements used during the season on the Thursday before the British Grand Prix: 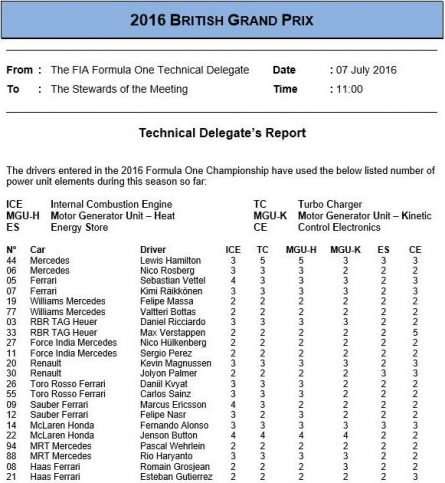 This leaves the graph of ICE usage this season looking like this:

Five drivers have now used four ICE, and we are less than halfway through the season.  Half distance will come for most drivers during the Saturday in Hungary, so far Jolyon Palmer has driven the shortest distance over race weekends (6040km) with Valtteri Bottas completing the furthest distance (7652km).  Each Grand Prix distance is the smallest number of laps that exceed 305km (Monaco 260km), so with drivers averaging between 604 and 765km each race weekend, over half the distance is completed during free practice and qualifying.  There are six drivers who have only used two ICE so far, and as a result are in a very good position for the remainder or the season (particularly if their chosen PU manufacturer is bringing more updates).

With two drivers using their fourth:

The TC usage looks worse than the ICE:

Although six drivers are still on two TC used and there are only three drivers with four components used, it is the fact that Hamilton has used all five of his allowed TC for the season that makes the situation worse than the ICE.  Also, three of the drivers on three TC used (both works Ferrari drivers and Fernando  Alonso) have used their third TC for four races, so would be expected to need a next TC before the summer break.

Motor Generator Unit – Heat (MGU-H) – The same six drivers as took a new TC used a new MGU-H, however the two Toro Rosso drivers swap over regarding which one has used three (Ericsson) and which has used four (Nasr).  The usage graph therefore looks remarkably similar to the TC graph:

Motor Generator Unit – Kinetic (MGU-K) –Jolyon Palmer used his third MGU-K, which brings him level with Kevin Magnussen and Daniel Ricciardo in using three ICE, TC, MGU-H and MGU-K.  Only Max Verstappen of the Renault powered drivers remains on two of these components.

Two drivers have used their fourth MGU-K for the first time in Britain:

The usage graph shows that this is a much more reliable component than the MGU-H:

These are all on track to get to the end of the year without grid penalties, while Fernando Alonso used his fourth, which may give him trouble before the end of the year.  He is the only driver likely to be in trouble with this component, as can be seen by the usage graph:

While Fernando Alonso used his fourth for the first time.  The usage graph for CE:

Shows that it is Max Verstappen who is in trouble with this component, already having used all five of the allowed CE for the year.  Alonso is the only driver on four CE, and could also be in trouble, while of the eight drivers on three CE used, it is Jolyon Palmer who is most likely to need a fourth before the summer break, and also have the potential to run out before the end of the year.

Ultimately with nearly half the season gone and the gap between the two championship contenders down to a single point, it may come down to grid penalties for exceeding five PU that determine the 2016 world drivers championship.  Mercedes may want to introduce any PU upgrades in time for when Hamilton needs to take his sixth TC and MGU-H in order for him to take best advantage from the upgrade.  It does look like the penalties won’t occur before we get to the summer break, but with both Spa and Monza being power circuits, the penalties could start to occur straight after.

While Lewis Hamilton looks to be in the worst position with regards to potential grid penalties (I expect him to have to take at least a fifteen place grid penalty for changing the TC and MGU-H on two occasions before the end of the season) most of the customer Mercedes drivers have got to this point of the season using only two complete power units (only Rio Haryanto has needed to join Nico Rosberg in using three components of some elements of the PU). The Williams, Force India drivers and Pascal Wehrlien will as a result have fresher power units… Read more »

Thanks for the update and analysis Dave. If the Mercedes P.U’s are genuinely the same for all the teams, then racing team Mercedes must be pushing their p.u’s significantly harder than the teams they supply. I guess some if that might come from the way they package and cool the P.U’s, the rest from running them on ’11’ more often. Am I correct in thinking that only Ferrari have their 2016 spec, and the other teams are running the (very reliable) 2015 spec? If not the same scenario may apply. It will be interesting to see if Mercedes and Ferrari… Read more »

Toro Rosso are the only team running last year’s Ferrari power unit, Sauber and Haas are using this year’s unit. They are choosing to update their units later than the works team as it means they are more likely to get through the season without penalty at the expense of delaying the latest development for a race or two.

Judging by results, the customers with the 2016 p.u’s aren’t getting any benefit from what I’d assume would be a significant extra investment – maybe STR are also having their P.U’s assembled by swiss watchmakers?