As is usual, on the Thursday prior to the race, the FIA issued the report into the number of Power Unit Elements used by each driver to this point in the season: 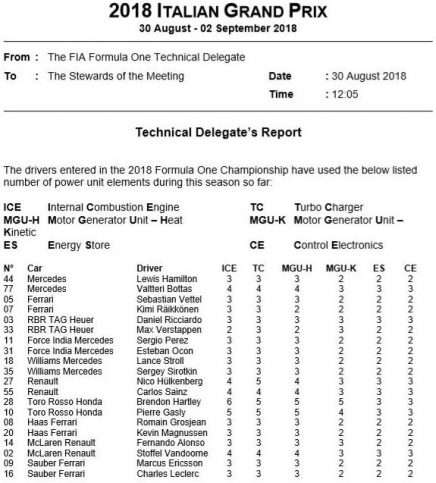 Four drivers ended up with grid penalties last time out in Belgium, all took a complete new Power Unit (PU), and as a result ended up at the back of the grid.  Their positions were decided by the order in which the teams notified the FIA.  Valtteri Bottas and Nico Hülkenberg fitted their new PUs before Free Practice 1, and so ended up on the ninth row of the grid, while Carlos Sainz and Stoffel Vandoorne only fitted theirs after qualifying (the result of a poor qualifying session), and so ended up on the tenth row to start the race.

With both Spa and Monza being power sensitive circuits, teams chose to fit new updated elements prior to the Belgian race.  Both Ferrari and Mercedes had their third iteration of the 2018 PU available to those wanting to fit new elements.  Renault meanwhile had their C specification available, but warned that the reliability wasn’t yet at the level of the earlier specification.  Despite the increase in power, teams have so far chosen to stick with the earlier specification.  Honda have been developing their PU all year, but no new elements were fitted for Spa. 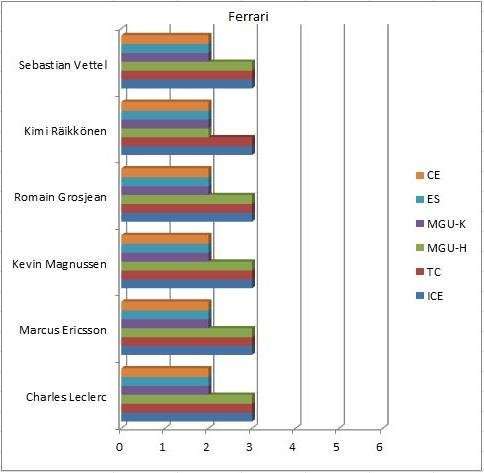 All the Ferrari drivers have used all their available allowance of PU elements (and no more) with the exception of Kimi Räikkönen.  He still has the opportunity to fit a fresh Motor Generator Unit – Heat (MGU-H).  Normally this component is changed along with the Turbocharger (TC), but Räikkönen fitted a TC out of sequence following a failure earlier in the year. 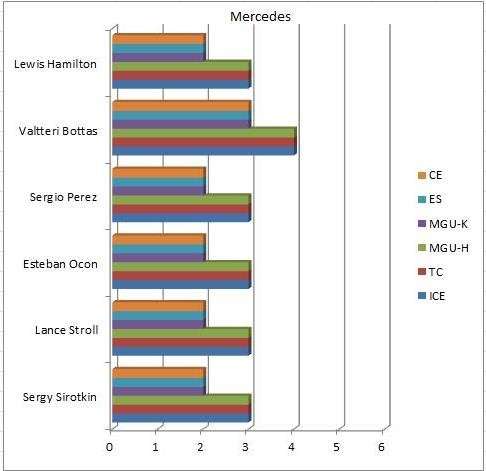 Every Mercedes driver took either a new PU complete, or all the remaining elements of their season’s allowance.  Bottas is the exception having fitted his final PU following the failure in Austria, he took a complete new PU in Spa so that he could benefit from the improvements available in the latest specification. 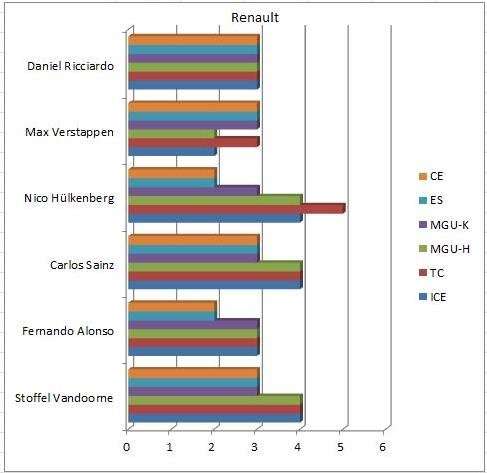 The Renault PU use is far less consistent than either of the Ferrari or Mercedes drivers.  Every single Renault powered driver has had a grid penalty of some sort so far this year.  They are still to catch the top two in both power and reliability.  While all six drivers have suffered grid penalties for using an extra Moto Generator Unit – Kinetic (MGU-K), four have used extra Energy Stores (ES) and Control Electronics (CE) while three have exceeded the permitted number of Internal Combustion Engine (ICE), TC and MGU-H.  Despite this, Max Verstappen is the only other driver to have some spare PU Elements left to use (an ICE and a MGU-H).  Daniel Ricciardo is reported to be likely to fit a new PU this time out (AUTOSPORT), and it looks likely that Red Bull will be the only Renault powered team to try the C specification PU (AUTOSPORT).

The situation for Honda hasn’t changed since last week.  Both drivers are well over their allowance, but could end up fitting new elements either for reliability or performance upgrade reasons.

Worth noting at this point is what happens if drivers change teams.  The PU allocation is tied to the car and not the driver.  So a driver moving to a different team will take on the PU allocation of the driver he replaces.  This also explains why Racing Point Force India didn’t have their PU allocation reset, despite being a new team.  The chassis remain as Force India’s and so the cars remain the same even if the team name has changed.  Force India remains in the name of the team because the team has to own the Intellectual Property Rights to the chassis in order to qualify as a constructor, next year expect both the chassis and the team name to change.

With only two drivers able to take new PU elements penalty free, expect more grid penalties from now on, but these are most likely to be among the Renault and Honda powered cars.  Mercedes powered machines should now get to the end of the year penalty free, while Ferrari may have a few elements that cause their drivers some issues.  However, every driver has used their final PU before the ideal time (with 21 races in the season, each of the three ICE, TC and MGU-H needs to last for seven race weekends).  So each will need to fit an earlier PU for some of the less power dependant circuits (two for the Mercedes powered drivers and at least three for those powered by Ferrari). The FIA report never indicates which particular unit is used, just the total number that have been used to date.

Thanks for the summary Dave. The histogram format of the p.u elements makes it much easier to understand the usage. As usual you’ve also provided some great insight and analysis to go with it. As an extra refinement, could you add the race (number) at which each element was introduced? I remain amazed by the reliability that has been achieved with these p.u’s. Getting through the season without penalty on the 3/2 element allowance looked very unlikely for anyone but Mercedes even at the end of last season. But with 8 races to go, the picture could still change radically.… Read more »

The Mercedes teams (particularly the four customer cars) used their first PU to its maximum mileage. Mercedes changed (ICE, TC and MGU-H) after seven complete events, while Williams and Force India changed after eight complete events. It is less likely that these components would then be used for Friday practice sessions as their mileage was so high. The third set of ICE, TC and MGU-H was fitted ‘early’, so it is possible that the second set may be used in the Friday Free Practices from this point on. Other Manufacturers chose to change their elements earlier, so for Ferrari in… Read more »

Cheers Dave. It’s a pity that F1 is so secretive about its technology, there are so many interesting stories they could tell. The manufacturers must have extensive condition monitoring on the p.u elements, and I’d expect that inform them on how much life each element has. Its possible some of those first series p.u elements still have useful life in them. As you say, there will be some very smart thinking going on to decide when to sacrifice some power or efficency by using the used elements, so they have the newer elements available when power matters most. I’d imagine… Read more »

Both Daniel Ricciardo and Nico Hulkenberg fitted a complete new PU prior to Free Practice 1. In Ricciardo’s case it was necessary as his existing PU was coming to the end of its like, and Monza has a low penalty for starting at the back as it is a track that allows overtaking. In Hulkenberg’s case, he was going to be starting at the back anyway thanks to the ten place grid penalty for causing the turn 1 incident at Spa. This will at least give him sufficient PU elements to get to the end of the year without further… Read more »

A great example of those strategy calls.
RBR backing themselves to use the power of a new C spec p.u to make up places at Monza and chase their usual 5th /6th positions for the rest of the season.
Its really odd that Renault aren’t prepared to back their own p.u development team and have opted for the lower power B spec. Maybe they think they have the ‘third best chassis’ so don’t need the extra power?

There is an AUTOSPORT story today that states both Red Bull cars are expecting to have to fit further PUs before the end of the season. Verstappen already has an ICE and MGU-H that he is likely to fit tomorrow penalty free. If the statement is true, it looks like they don’t have any mileage left on the earlier units. Renault are trying to get to the end of the year without any further penalties, which is why they are going for reliability. They have to keep scoring points or they will be caught by Haas. Red Bull aren’t going… Read more »

Max Verstappen and Marcus Ericsson fitted a new ICE prior to FP3. In Verstappen’s case it was his third and final ICE and was the spec C Renault that his team-mate had tried in FP1 and 2. Despite Verstappen being faster than Ricciardo on Friday, the team obviously saw value in fitting the newer specification ICE even with its supposed poorer reliability. In Ericsson’s case, it was fitted as a result of the accident he had in FP2. In fitting just the ICE rather than a complete PU, he starts in 18th position rather than 20th. I don’t know whether… Read more »