Power Unit Use- Update before Italy…is Ferrari or Red Bull in trouble?

As usual, the FIA issued their report into the Power Unit elements used by each driver so far this year: 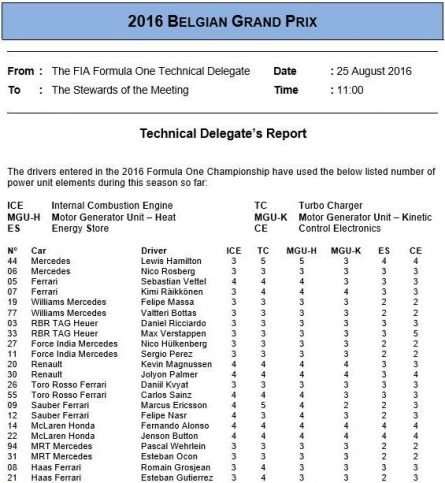 This differs from the update I wrote last week before the Belgian Grand Prix in that Jenson Button had used four complete Power Units whereas the FIA reports prior to the summer break indicated he had only used three CE and ES.  Prior to Free Practice one several drivers had new power unit elements fitted.   Seven drivers fitted a new ICE:

For the first three on the list, this was their fourth ICE and this is probably when the teams expected to fit the fourth power unit element if they were to use them evenly throughout the season.  For the last four on the list, this was their fifth (and final) ICE.  With Spa being a circuit where a high percentage of the lap is spent at full power, it makes sense to fit a fresh engine for use at this track and the similarly power hungry Monza.

The same seven drivers fitted a new TC.  Rosberg, Kvyat and Nasr used their fourth TC, and are therefore on track to get to the end of the season without penalty.  The pair of McLaren Honda drivers fitted their fifth TC.  Hamilton and Ericsson having already used five TC fitted their sixth and therefore earned a grid penalty.

Five of these drivers fitted a new MGU-H, the Sauber drivers not needing new elements on this occasion.  Rosberg and Kvyat again used their fourth element and the McLaren pair taking their fifth.  Hamilton took his penalty earning sixth MGU-H.

The first three drivers used their fourth element, while the final three fitted their fifth element.

For the Sauber Ferrari pair and Guitiérrez this was only their third element while for the McLaren drivers it was their fifth.

Prior to Free Practice two, Fernando Alonso took a sixth complete Power Unit to replace the new unit that had developed a coolant leak.  While Lewis Hamilton fitted a new ICE, TC, MGU-H and MGU-K to build up his stock of Power Unit elements to last the remainder of the season. This was the fifth ICE and MGU-K and the seventh TC and MGU-H, earning penalties for each driver.

Lewis Hamilton fitted a third set of these components before Free Practice three.  This was his sixth ICE and MGU-K and the eighth TC and MGU-H earning yet more grid penalties, but meaning he has more than enough power unit elements to get through the remaining eight races.

With Fernando Alonso suffering oil pressure issues right at the start of Qualifying one, a complete new Power Unit (his seventh) was fitted before the start of the race.  Provided the coolant leak and oil pressure issue can be repaired, he should be in a similar position to Lewis Hamilton and have more than enough elements to get through the remaining races.  However, if the issues cannot be repaired, Alonso may yet suffer further grid penalties before the end of the season.

Mercedes used five tokens over the summer break, and while the works team were the only Mercedes powered drivers to fit the upgraded unit in Belgium the updates will be available to customer teams when they next fit a power unit.  With Monza being a power circuit, it would be surprising if they didn’t all fit a new Power Unit for the coming race.

Honda also spent seven of its remaining tokens on upgrading the power unit, which is why both drivers fitted new complete power units prior to Free Practice one.  The upgrade tokens used by each of the four manufacturers are as follows:

Renault have stated that they have no intention to upgrade their power unit further this season, while Honda have indicated their intention to use all the available tokens before the end of the year.  As any upgrades made this year can be rolled over to the power unit next season this makes sense.

The graphs for the Power Unit Elements used so far are:

These graphs highlight those drivers that took penalties at the last race in Belgium.  It also shows that there a number of drivers who have used five power unit elements, and are therefore likely to be subject to grid penalties at some point over the remaining eight races of the season.  Thes drivers are:

For all of these drivers with the exception of Max Verstappen the fifth elements were fitted at the Belgian race, so it is only Verstappen that is at risk of receiving any grid penalties at Monza.

Ferrari are bringing an update to their power unit this weekend, spending some of their remaining three tokens.

Raikkonen must be hoping that the update isn’t to the MGU-K, as that would give him a ten place penalty at the team’s home race.