Power Unit Use – Update before Sochi

As is usual on the Thursday prior to a Grand Prix, the FIA today issued their report showing the Power Unit components used by each driver so far this season: 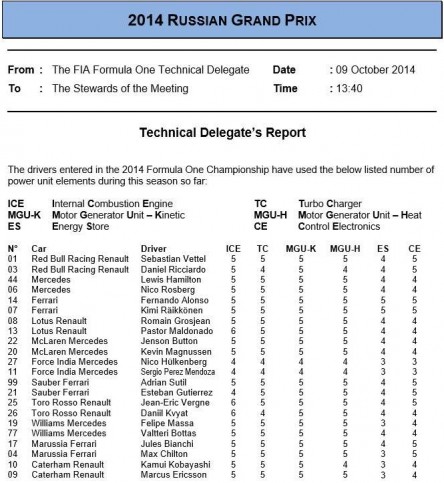 Note that Jules Bianchi’s usage figures will pass to whoever takes the Marussia drive alongside Max Chilton. Although Alexander Rossi is on the entry list for this weekend, the team have yet to confirm if they will enter a second car this weekend.

Three drivers (Maldonado, Vergne and Kvyat) have now received penalties for using their sixth ICE.   Of these, Maldonado was unable to take all of his ten place grid penalty last time out, and so will carry over the remaining five place grid drop to this weekend. JEV was particularly unfortunate in that he needed two fresh ICE units over the Japan weekend after problems with his fifth unit took him out of FP3. Almost everyone who could took a new ICE in Japan, only the Force India drivers (who didn’t take any new components – unique among the Mercedes runners) and Gutiérrez remain on four units used. Perhaps they are saving fresh units for the double points of Abu Dhabi?

When it comes to the Energy Store we can see perhaps the first signs of some tactical use of components, with only the two Ferrari drivers having used five components, everyone else is on four or even three – this being apparently the most reliable of the components within the PU. The value of this additional usage becomes clear when the CE use is looked at as well, as Ferrari have also used five of those components. They are the only drivers to have used five of every component, so if they need to use a sixth component they have the choice to take a complete Power Unit and start one race from the pit-lane, no-one else has that ability, as they haven’t yet used their complete allocation of five of each of the components.

The two Force India drivers are playing the other end of the reliability scale, as they are the only two drivers who have yet to use a single fifth component of their PU.

We could also see some more tactical swaps of components from some drivers who think they will need to take a penalty at some point before the end of the year, to put them in the same position as the Ferrari pair.