Power Unit Use – Update before Spain

The FIA report published prior to the Russian Grand Prix shows the following: 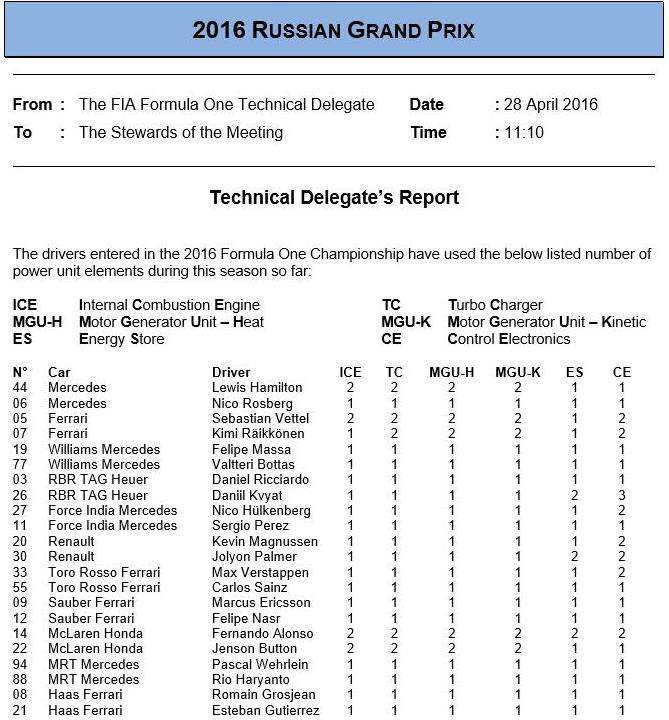 This was the situation on the Thursday before the race, however new components were fitted to the cars before the race.  Both Ferrari drivers took a new Internal Combustion Engine (ICE) before that start of free practice (Kimi Raikkonen’s second and Sebastian Vettel’s third) as a result of the three tokens that the team had spent on the ICE.  Daniel Ricciardo needed a new Control Electronics (CE), his second, before free practice.

Before Free Practice 3 on the Saturday, Vettel had to fit his second Energy Store (ES) and Felipe Nasr his second Motor Generator Unit – Kinetic (MGU-K).  Raikkonen waited until just before Qualifying before replacing his ES.  Lewis Hamilton’s repeat failure of his Motor Generator Unit – Heat (MGU-H) in qualifying led to the team deciding to replace the bulk of the power unit, retaining only the ICE and MGU-K from that which he had used at the beginning of the season.

The Mercedes update to their fuel injection system (worth two tokens) strangely did not require any new PU components, as it is mounted external to the ICE.  This is defined in Appendix 4 of the Technical Regulations as:

With five complete power units available for each driver for the entire 21 race season, each unit must last on average four and a quarter race weekends.  We have only had four races so far this year, so logically all drivers would want to be on their original components otherwise they are likely to be in trouble before the end of the season with unwanted grid penalties. The drives still on their first power unit are:

Max Verstappen meanwhile has lost out in his swap to Red Bull, as Daniil Kvyat has already used 2 ES and 3 CE, so Verstappen gets the allocation of Renault (sorry TAG Heuer) power units, while Kvyat gains as Verstappen had only needed to change a single CE from his stock of Ferrari power units.

Overall Hamilton is in the worst position having used three TC and MGU-H, and to of everything else. Vettel is on three ICE and two of everything else.  Otherwise it is Raikkonen and Fernando Alonso who have used two complete power units, while Jenson Button has used two ICE, TC, MGU-H and MGU-K.  The other drivers that have needed new components have only taken ES or CE which in the time these power units have been used in F1 have been the most reliable components, so the could get to the end of the year without trouble.

As to future upgrades and token spend, Renault are planning to bring something to the in season test after this race weekend, which if it works should be on the car for Canada.  While Sauber are expected to run the updated Ferrari ICE this weekend, with Haas waiting until Canada before introducing it.  This should give Haas more options at the end of the year with fresher engines, but both customer teams have waited for their planned ICE changes before running the update.

As the upgrade was external to the ICE, the team didn’t need to break the FIA seals, which wouldn’t have been legal. They chose to build up a complete power unit separately from the car (which was in pace ferme at the time) and the swap the complete unit over once allowed to work on the car. In order not to get a grid penalty, the replacement had to be identical to the item removed, hence the need to fly a new fuel system in overnight. I can only presume that there was insufficient time to strip the part off… Read more »