Power Unit Use – Update in advance of the Japanese Grand Prix

Today the FIA published its list of the number of Power Unit components by each driver so far this season: 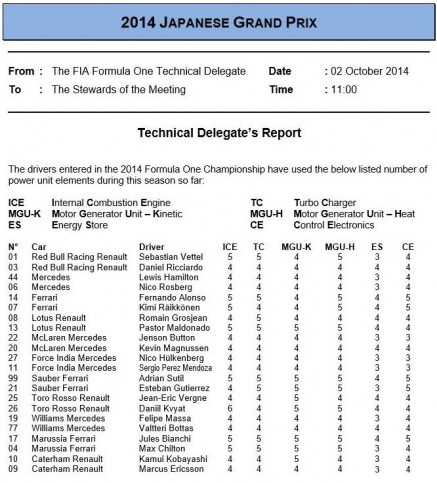 No one use a new ICE last time out in Singapore, so the figures remain as last time out. However with only five races left, we can make a reasonable estimate of who is going to be in trouble to make their allocation of five units last until the end of the season. The drivers are averaging somewhere between 556km (Kobayashi) and 760km (Magnussen) per race weekend, so they have another 3,300km to do before the end of the year. If they can get to the end of this weekend without taking a new unit they will have about 2650 km to go in the remaining four races. Looking at the number of ICE each driver has used so far, and the distance they have driven over the Grand Prix weekends, the following shows the average distance each ICE has lasted: 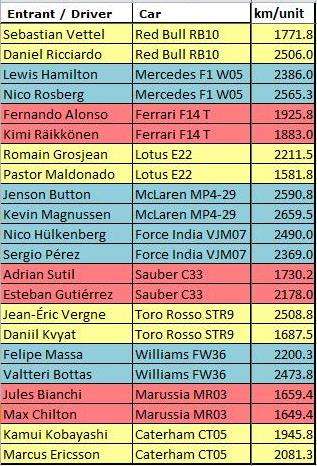 Now, for drivers like Alonso, Räikkönen, Sutil and Chilton, who all used new engines in Italy, this makes their average distance look poor. But it does give an indication of the fourteen drivers who still have a fifth unit to use, which ones are likely to get to the end of the year without an ICE related grid penalty. Aside from the Mercedes powered drivers, this looks to be limited to just Ricciardo and Vergne.

When it comes to the TC, three drivers (Vettel, Alonso and Gutiérrez) used their fifth unit for the first time in Singapore. Again there are fourteen drivers who still have a fifth unit to use, and the average distance that these units have lasted is: 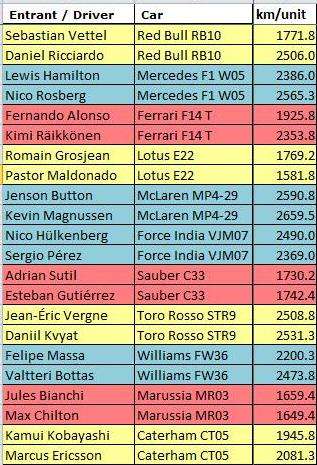 As before, those drivers who have changed the TC recently will have figures that look worse than they are; Ricciardo, Alonso, Räikkönen, Sutil and Chilton took new TCs in Italy in addition to the three who took new units in Singapore. Again the Mercedes power units look strong (Massa being the potential weakest) with Ricciardo, Räikkönen and the Toro Rosso drivers. 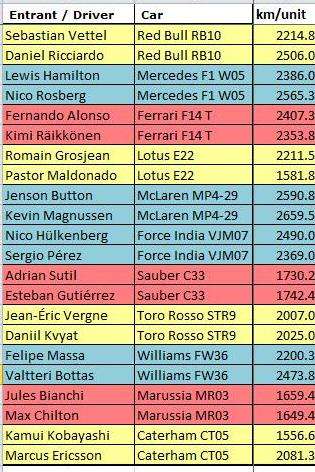 Maldonado, the Sauber, Toro Rosso, Marussia and Caterham drivers look to be in trouble with this component.

Things weren’t much better when it came to the other Motor Generator Unit, six drivers needed a new MGU-H in Singapore (Ricciardo and Ericsson unwrapped their fourth, while Vettel, Alonso, Gutiérrez and Kvyat used their fifth). For both Alonso and Kvyat this wasthe second new unit in consecutive races. The average figures are: 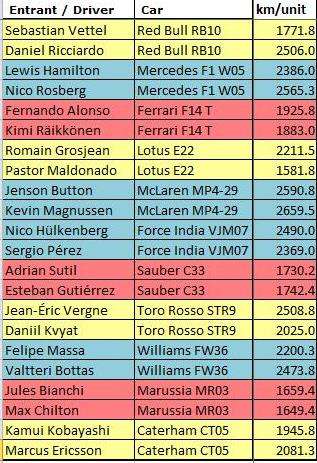 For the mGU-H it is Riccciardo (again), Grosjean and Vergne who join the Mercedes powered drivers in looking like making it without a penalty.

When it comes to the ES, as no driver has yet used their fifth unit, this component is unlikely on its own to cause a grid penalty for anyone, despite Ricciardo and Kvyat having their second new unit fitted in consecutive races. However I do think both Sutil and Bianchi should consider fitting a new ES this time out, to bring them up to five units across the board, then should any single component fail they can fit a complete sixth PU and start from the pit lane without having to carry over penalties into the subsequent event. Average distance lasted are: 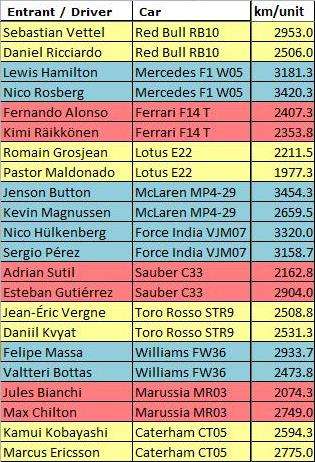 Maldonado does stand out as being the only driver to get less than 2000km from his ES on average, so he may be the sole driver to suffer a grid penalty for a sixth ES.

Seven drivers took a new CE in Singapore (the Mercedes and Toro Rosso drivers, Grosjean and Massa took a fourth unit while Sutil used a fifth unit). The average distances are: 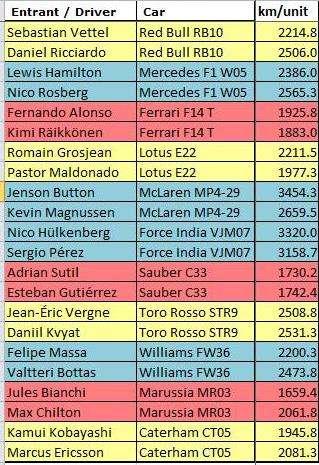 As for all of these tables, if any driver is on their fourth unit, and the average distance each has lasted is less than 2400km, they could have a problem reaching the end of the season without a grid penalty. If they have already used their fifth unit, then they are already highly likely to receive a penalty.