As mentioned previously the FIA list the power unit usage on the Thursday before each Grand Prix.  There are now a number of drivers who have used four components from their allocated five for the season, so we are starting to get close to the time when penalties will be applied.  The current usage list as published on 19 June 2014 is: 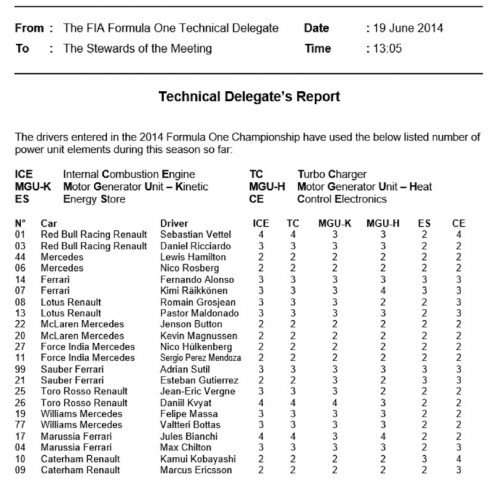 So it is primarily Renault users who are in the most trouble (Vettel, Kvyatt and Kobayashi) although some Ferrari users are also suffering (Räikkönen and Bianchi).  Three of those five drivers have three components in the danger zone (using four of the items in the first seven races).  However the distance each driver has completed so far this season is different due in part to the accidents and incidents they have been involved in, but also due to failure of some of the power unit components.  Looking at the total  distance covered by the car during the race weekend (including the distance any third driver put in on a Friday morning) we get the following distances for each car: 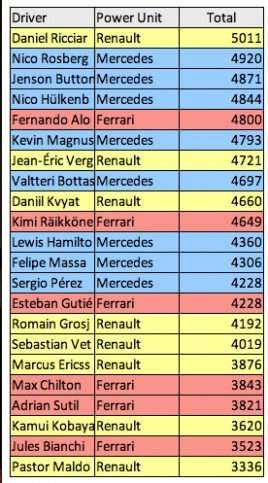 It is clear from the table why Pastor Maldonado is such a popular choice for first out, as he has completed the shortest distance so far this year, but Daniel Ricciardo’s lead in the distance travelled table is surprising given his Renault power unit, and where all the other Renault users are in the table.  Dividing the distance covered by the number of units used, we can get some idea of how long each of the Power Unit components are lasting: 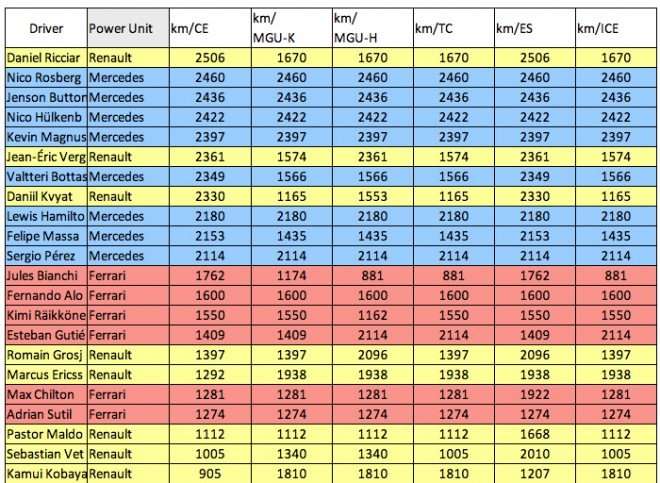 This table is sorted by how long the Control Electronics are lasting, but the results are similar no matter which parameter you sort on.  Mercedes are usually in the top half, with the exception of the two Williams drivers who have issues with the Motor Generator Units (both Kinetic and Heat) and the Turbo Chargers.  Renault are usually towards the bottom with the exception of Ricciardo for CE and ES.  Ferrari Power Units are also poor, with particular problems for Bianchi (MGU-K, MGU-H and Internal Combustion Engine).   Of note is how poorly the current World Champion is doing, with even Pasto Maldonado getting a greater distance from his CE, TC and ICE, no wonder Vettel is struggling to make his mark on this season.

With drivers covering between six and eight hundred kilometres during a trouble free weekend, it won’t be long before some start to take grid penalties for using a sixth component.