The FIA technical report published on Thursday 21 August shows the number of Power Unit components used up to and includig Hungary: 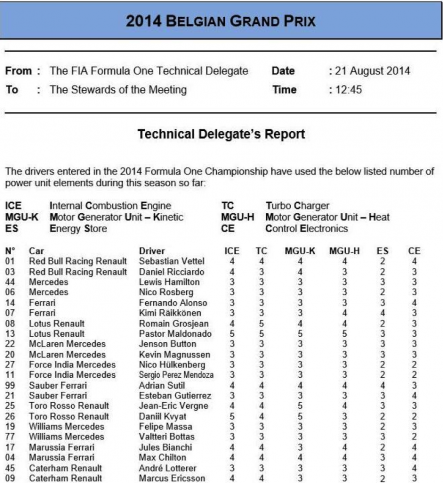 Unsurprisingly given the nature of the Hungaroring (which has very little full throttle running compared to the higher speed circuits used at Spa and Monza), there was little change in the components used.  McLaren put in new Energy Stores (ES) and Control Electronics for both cars, as the change affected both cars it looks planned.  The only other change was a new ES for Bottas.  As all of these changes only bring the component count for each driver up to three, it is not likely to have a significant impact on penalties during the season.

FIA Technical Report number 9 from the Belgium GP lists all the new PU components that have been changed prior to the start of Free Practice.  Unsurprisingly given the high speed nature of the track, 14 of the 22 drivers have a new Internal Combustion Engine (ICE) (with both Vettel and Bianchi using their fifth unit).  All the Mercedes powered drivers have a fresh ICE this weekend, they also have a fresh Turbo Charger (TC), Motor Generator Unit – Heat (MGU-H) and Motor Generator Unit – Kinetic (MGU-K).  Mercedes have opened box number four each of their drivers.  Renault and Ferrari drivers have not all been as fortunate as they have used more components so far in the season, so not all start this weekend with fresh components.  The works Ferrari’s have a new ICE (number four) but no new TC or either MGU.  This may have a performance impact in the race?

However during Free Practice 1 on Friday, Vettel suffered a problem with his Internal Combustion Engine (which was his fifth unit fresh in the car).  This issue meant the team didn’t run at all during Free Practice 2 while they investigated the fault.  He will revert to the unit used in Hungary for Qualifying and the Race (avoiding any grid penalty this time), but the team are 99% sure they will need to use a sixth unit before the end of the season.

The same can also be said for the Lotus and Toro Rosso drivers who have several components where number five has already been used.