Today the FIA published its report on the power unit components used up until the end of the British Grand Prix at Silverstone (the ninth race of the season).  Note the components used during the in-season testing are not counted as part of the five power units required to last the year.  The report is shown below: 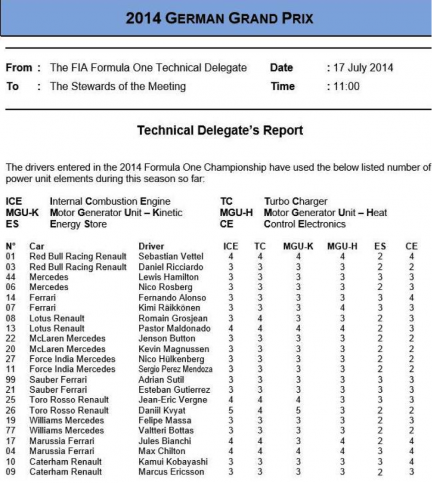 There could be a mistake in here.  Last time the FIA had reported that Nico Rosberg had used three Energy Stores (ES), and this time it is showing only two.  Either this report is in error, or the one produced prior to Silverstone is.  However the driver who I am really concerned about is Daniil Kvyat, who has now used all of his five allowed Internal Combustion Engines (ICE) and Motor Generator Units – Kinetic (MGU-K), these units now have to last for the remaining ten race weekends if he is to avoid a grid penalty.

While the absolute number of units used by a driver can give an indication of how much difficulty they may be in, perhaps seeing how long they have managed to make each component last may give a better feel for which drivers/teams/power unit manufacturers are really in trouble.  So the use of the various components is as follows:

As was discussed in the comments last time, the Control Electronics are split into different sub-sections, and these splits differ between the three manufacturers.  Each of these sub-sections can be changed independently without requiring a whole new CE to be fitted.

With a ten place grid drop for the first time a sixth component is used, and a five place grid drop for each subsequent component of the sixth Power Unit, I wonder if a team (Toro Rosso) may make a tactical fitting of a complete sixth Power Unit (which results in the driver starting from the pitlane), rather than fitting the components piecemeal?  To do so may result in a smaller number of grid places lost over the course of the season, but would require all five components to have been used in the power unit beforehand.  It will be interesting to see if Daniil Kvyat suddenly starts using TC, MGU-K, ES and CE at a far higher rate than he has done so far.