Power Unit Use – Update prior to Monza

The FIA have published the list of Power Unit (PU) components used prior to this weekend’s Italian Grand Prix, the report is shown below: 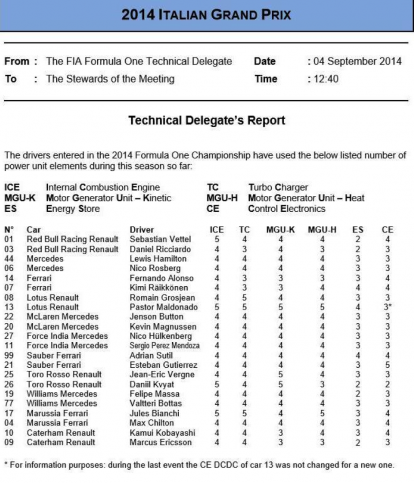 All the Mercedes teams used planned new components (ICE, TC, MGU-K, MGU-H) for Spa last time out, as this is one of the circuits that puts the highest stress on those components. Renault and Ferrari users have not had that luxury, as they have had reliability issues through the year that prevented this routine refresh of components. Ferrari and Renault drivers that did manage to update components were:

ICE: Vettel and Kobayashi (Lotterer). Although Vettel’s unit had to be changed for an older item after problems in Free Practice 1. Kobayashi’s ICE should still be relatively fresh after Lotterer managed to put only 497km on the unit thanks to his early retirement in the race. Four drivers are now on their fifth unit (three Renault and one Ferrari) and could be up for a penalty if this punishing track breaks their ICE. Given that some of them are almost guaranteed to get a penalty before the end of the season, I wonder if they will choose to sacrifice a high mileage ICE and take the penalty here where at least it is possible to overtake if you have good straight line speed?

TC: Gutiérrez, Bianchi and Kobayashi (Lotterer) fitted new turbos last time out in addition to all Mercedes powered drivers. Three drivers are on their fifth unit (two Renault and one Ferrari).

MGU-K: Gutiérrez and Bianchi were the only non-Mercedes drivers to get new Kinetic Motor Generators. Three drivers are on their fifth unit, all use Renaults.

MGU-H: again it was Gutiérrez, Bianchi and Kobayashi (Lotterer) who fitted new units last time out from the Ferrari and Renault runners. Two drivers are on five units used to date (one Renault and one Ferrari).

ES: this seems to be the most reliable of the six PU components, and most drivers chose to stick with the unit they had previously with only Rosberg, Grosjean, Maldonado, Hülkenberg, Pérez and Bianchi updating for Spa. No drivers have yet used their fifth component, this will have to change is teams are to make a tactical switch of a complete PU (the penalty is starting from the pitlane) rather than switching three, four or five individual components (20, 25 or 30 place drop with the remainder of the places carried over until the next race).

CE: while not as reliable as the ES, the multiple different sub units of this component can make the use hard to track. The different manufacturers have divided the Control Electronics into different sub units. Mercedes has split the CE into:
CE-KCK510;
CE-INJ310;
CE-IGN310;
CE-CUHK;
CE-DCDC.
Ferrari has:
CE-ESTRAC;
CE-CUHK;
CE-DCDC;
CE-PB1&2;
CE-OBI.
and Renault has:
CE-DCDC;
CE-CUK;
CE-CUH;
CE-PSU.
Only Räikkönen, Hülkenberg, Pérez, Sutil, Gutiérrez and Bottas added to their total CE count last time out. Only one driver has used a fifth CE and as for the ES this situation will need to change if someone like Maldonado (who has used five ICE, TC, MGU-K and MGU-H) is to take the least damaging route to getting the sixth units he will need to finish the season.