While the longer term aim is to limit drivers to four Power Units per season (and this limitation starts next season), for the first year of these new regulations the FIA allowed each driver to use five Power Units for the year.  The components can be used in any combination (if for example a turbo fails, the driver doesn’t need to change a whole Power Unit, just the TC).  However if a sixth unit is required of any of the components, then the driver gets a ten place grid penalty the first time it is used.  If an additional component from the sixth power unit is required, then the driver takes a five place grid penalty for each component used.  Similar penalties apply each time a new power unit (7th 8th 9th etc) is used.

On the Thursday prior to each Grand Prix, the FIA issues a report showing the components used to date.  This is the reports prior to the British Grand Prix (so following eight of the nineteen races this season, or 42% of the season): 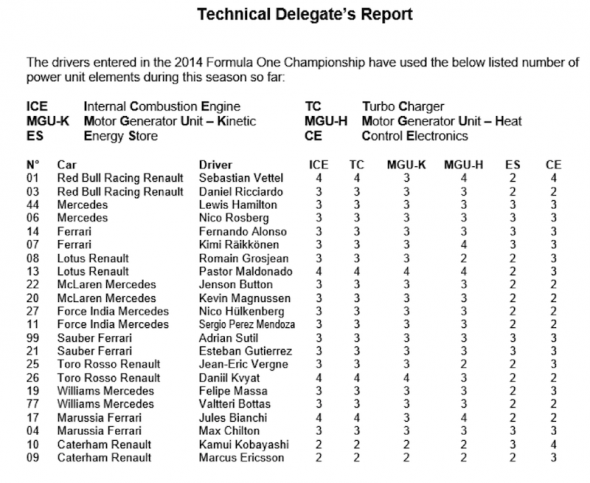 Taking the components in turn, seven drivers used a new ICE last time out (both Mercedes, both McLaren and Both Force India drivers together with Pastor Maldonado).  For the Mercedes powered teams this looks like their planned change (only Williams of the Mercedes powered teams used a third ICE in Canada).  Maldonado though is now on his fourth ICE, joining Vettel, Kvyat and Bianchi in running short of this component.  Both Caterham drivers have still only used two ICE (so are making the engines last for four GP weekends) which is actually on target to get to the end of the season without penalties, however they have done less miles than most through the year to date, so that may explain some of it.

It is a very similar story for the TC, with the only difference being Gutiérrez who went up to his third TC last time out.

For the MGU-K again we have the same seven drivers using a fresh component last time (the six Mercedes drivers using their third, and Maldonado his fourth).  This time it is only Maldonado and Kvyat who are in trouble on four components used, with everyone else bar the Caterham pair on three.  The Ferrari runners have been using their third MGU-K for four race weekends, so may need a fresh one this weekend?

Mercedes again used a third MGU-H in all their power units (although once again Williams had first used theirs in the previous race weekend in Canada).  Vettel and Maldonado were the other two drivers to need a fresh component last time out, both now on four MGU-H joining Räikkönen and Bianchi who first used their fourth component in Canada.  Once again the Caterham pair have only used two to date, but this time they are joined by Grosjean and Gutiérrez.

The ES seems the most reliable of all the components in the power units, regardless of manufacturer.  Only the works Mercedes drivers and Chilton needed a fresh component at the last race weekend, both now using their third.  This is possibly the one component that will not cause any driver to suffer a grid penalty come the end of the year.  Even if Kobayashi has been using his third ES since the second race weekend.

Once again Mercedes unwrapped their third CE for the works drivers last time out (it really does look like a planned change), with only Massa of the customer drivers needing to join them.  The only other driver to make a change is this component was Vergne, who also used his third CE in Austria.  Vettel and Kobayashi are the ones in trouble with this component, Kobayashi has been on his fourth component since using it in Malaysia (seven GP weekends), and the World Champion has been using his fourth unit since Monaco (three weekends).

We are unlikely to see grid penalties this weekend unless someone has two or more failures of the same component, and that hasn’t happened since the second race.  However even Mercedes look doubtful to reach the end of the season without penalty (they have changed their complete power unit after three and a half race weekends on average, so five power units wouldn’t even last eighteen races, and there are nineteen on the calendar this season (unless Wolff or Lauda know something we don’t?).

Has anyone checked Adrian Newey‘s office to see if his…

The old paddock joke was "present all the F1 cars…