Once again this morning when the cars went out on track it was damp, so most of the initial running was done on intermediate tyres. Most teams then switched to the hard tyres for the majority of the day, but unusually it was Ferrari and Kimi Räikkönen who went to the soft tyres late in the afternoon to set the best time of the day. Previously Ferrari had been using the medium tyre to set their best times this week. The overall lap times and total laps run looked like this:

In addition to Ferrari, both Toro Rosso and McLaren set their best times of the week. The lap count was impressive although comparable with what most teams were doing at this time last year:

The stand out comparison is that McLaren Honda have done significantly more laps this year than Red Bull managed last year. Even though the Woking team had several problems today: ‘an operational issues relating to the oil level’ according to McLaren Engineering Director Matt Morris, demonstrating that Ronspeak is prevalent throughout the team; and a fuel pump failure that stopped running in the afternoon. Even so 79 laps over the four days is better than four teams achieved last season:
Caterham 76 laps
Toro Rosso 54 laps
Marussia 30 laps
Red Bull 21 laps

The totals for the teams this year are:

Spread over the four days as follows: 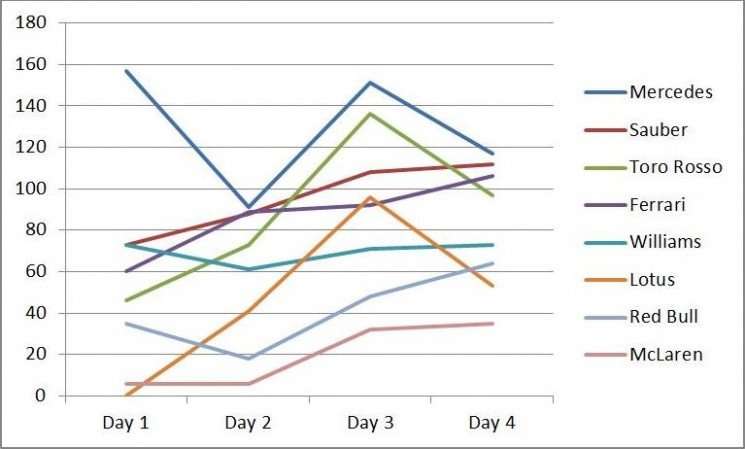 For comparison, in 2014 Mercedes only managed 309 laps in the four days.

It emerged yesterday that Honda aren’t the only power unit manufacturer in trouble, and that Renault have to limit their units running to stints of no more than ten laps. A ‘stupid part’ needs to be redesigned to enable the unit to run for longer periods. This will be done in time for the next pre-season test in Barcelona, but has significantly hampered the running of Toro Rosso and particularly Red Bull. According to AUTOSPORT, it is a shaft linking the ERS water pump that is causing the issue, it was redesigned to improve the packaging of the power unit, yet not enough attention was paid to the design of this component.

Lotus also packed up early after power unit problems for Romain Grosjean stopped him after 53 laps. Lewis Hamilton had a quick spin in his Mercedes which caused one of the red flags during the day, but no damage was done to the car and he was able to resume testing, still covering the furthest distance today.

With Ferrari also using soft tyres, Sauber’s ace looked slightly less impressive as Marcus Ericsson took second place 1.178 seconds behind the Finn. In the hard tyre runs earlier in the day he had been lapping much slower, demonstrating how hard it is to draw conclusions from these headline lap times.

Overall, then a much more productive test session than in 2014 for all concerned, and indications that we may start to see race simulations starting early in the next test. Then times will become more relevant and we may be able to try and work out who has got their winter development right.