The Turkish Grand Prix was a wet affair and not a typical rain situation but a damp, misting kind of rain that meant the Intermediate tires were the tire of choice for the entire race and strategy was king.

Lewis Hamilton was nursing an 10-place grid penalty and managed to come back through the field to hunt for a podium. Mercedes boxed him late and it left him in 5th off the podium while his teammate, Valtteri Bottas, to an impeccable win with a terrific run from pole to victory ahead of Red Bull’s Max Verstappen and Sergio Perez.

A win for Valtteri Bottas who didn’t put a foot wrong all day to take what may be one of his last victories for some time given Lewis Hamilton is in the title hunt and the Finn’s move to Alfa Romeo at the end of the season. Valtteri needed the win and it was a dominant performance given Red Bull’s struggles all weekend long for pace.

A win for Max Verstappen, Sergio Perez and Red Bull who struggled for pace over the weekend but they managed to limit the pace deficit they had to Mercedes with Lewis Hamilton taking a grid penalty for an engine change. Losing out to Bottas hurts but in a damage limitation run on a circuit that didn’t flatter their car, having both drivers ahead of Lewis was a key moment in both championships. A key to Red Bull’s strategy was hedging their bet that boxing Perez when the did was key as they felt Lewis wouldn’t make it to the end on one set of Inters. They were right.

A win for Ferrari’s Charles Leclerc and Carlos Sainz. Carlos had a terrific drive back through the field having taken an engine change penalty to finish 8th. Charles looked quick all weekend long and despite having led the race on old Inters, he boxed and still managed to hold off Hamilton for 4th place. Big points haul against their closets rival in the constructor championship, McLaren.

Despite the Red Bull Honda power struggling for pace against Mercedes this weekend, on balance, Honda power did well and in the hands of Pierre Gasly, it finished 6th bolted in the back of an Alpha Tauri. Pierre garnered a 5-second penalty for punting Fernando Alonso on the first lap but still managed to claw his way back in the 6th for some terrific points. Both Alpha Tauri drivers did their part in hassling Lewis’s recovery drive.

Honorable mentions to Alfa Romeo’s Antonio Giovinazzi and Kimi Raikkonen for finishing 11th and 12th and for Lance Stroll who, unlike his teammate Sebastian Vettel floundering around at the back, managed to score 9th for the Canadian’s efforts.

A fail for McLaren who struggled for pace on this medium-speed, long corner track. Daniel Ricciardo was mired in the back with brake issues and Lando Norris had no pace to hold off Lewis Hamilton or make a play against Gasly or Leclerc.

It would be hard to call Lewis Hamilton’s race a “fail” but the strategy didn’t quite play out and that’s a shame given their superior pace in Turkey. Lewis was told to box with the others, didn’t feel it was the right call and wanted to run the entire race on one set of Inters. The team could see the pace dropping off and by the time they did box, the new Inters were struggling with a graining phase that left Lewis off the podium. It was a strategy call and one in which Toto Wolff said they missed but some of that, similar to Lando Norris in Russia, was Lewis denying the initial call and wanting to stay out. Just shows you how in the car it can feel one way but the pit wall’s view of the big picture shows something else.

A fail for Fernando Alonso who looked set to be in the mix but having gotten spun on lap one, he then punted Mick Schumacher and gained his own 5-second penalty removing him as a factor all day.

A WTH for Sebastian Vettel who tried to change to Medium compound tires way ahead of a drying track and this dropped him to the back of the grid as he nearly crashed trying to get back into pit lane. Not a call you would expect from Seb but hey, they were throwing everything they could at the race.

A WTH for Esteban Ocon who was the only driver to manage the entire race on one set of Intermediate wet tires and kudos to him for making that work for a point finishing in 10th. 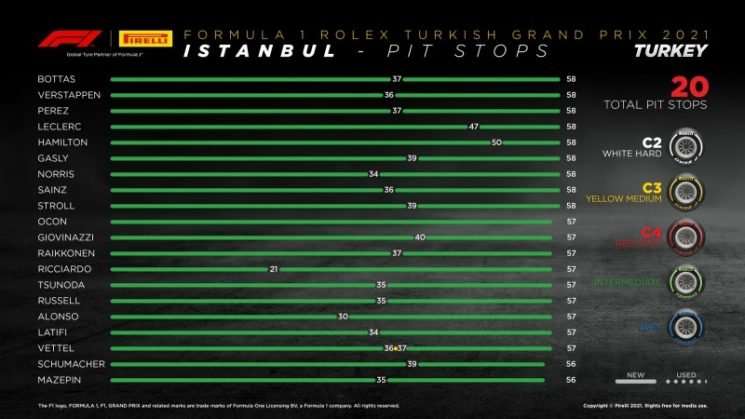 I swear had I been Leclerc I would have pulled into the pits and drive by slapped my engineer after that radio exchange.I just don’t get why Ferrari just doesn’t do strategy.

Headline should read, “Bottas shows Hamilton who wears the pants”

Previous articleAndretti talking to Sauber Alfa Romeo
Next articleTurkish GP Review | The Parc Fermé F1 Podcast Ep 753
An interesting race from a strategy standpoint but given it was a wet race, not the biggest result scrambler I've seen. Still, enjoyed the race and it was an interesting strategy challenge. Negative CamberRace Report: Bottas wins damp Turkish GP