For 69 of the last 70 years, the Italian Grand Prix has been hosted at what is known as the temple of Speed. The Monza Circuit is known for, with affectively only six turns, as the fastest race on the Formula 1 calendar. The circuit is an icon of F1’s venues and there is only one thing better than winning in Monza—winning in a Ferrari at Monza!

Ferrari entered the weekend with the notion that the long straights would favor their engine power and straight-line speed. When you couple that perceived advantage with the slipstream effect this year’s cars experience at a track like Monza, Ferrari felt good about the weekend as they lead the time sheets during the practice sessions.

For Mercedes, the straight-line advantage of Ferrari was understood but one thing Mercedes had going for it was their ability to manage tires—specifically the medium compounds—and establish a quicker long-run race pace than Ferrari. They just had to keep the red cars close and execute their plan.

Mercedes threw everything they had at Ferrari, including a 5-time champion, and came up short. Ferrari’s package was just a little better and fitting the Hard Compounds to Charles Leclerc’s car, instead of the Mediums, was the strategy that ensured a historic win for Ferrari’s new hero at Ferrari’s home race in front of Ferrari’s real bosses…the Tifosi.

A huge win for Ferrari and Charles Leclerc to win the Italian Grand Prix and hold off two Mercedes cars. The dynamics at Ferrari are boiling and if Saturday’s qualifying session sent a message to Sebastian Vettel about what Charles is and isn’t going to do, then his win sent a clear message that there is a new sheriff in town and with an exuberant crowd, Ferrari have a new hero in the eyes of the Tifosi. It was also a big win for Ferrari’s strategist to recognize their strength on the exit of the Parabolica and weakness on the Medium compounds making the right call on tires to hold the race win.

A win for Renault who seemed revitalized and quick in low downforce trim with a brilliant 4th and 5th which isn’t best-of-the-rest, it is ahead of Red Bull and showed legitimate pace in this high-speed configuration including plenty of shove from their power unit. 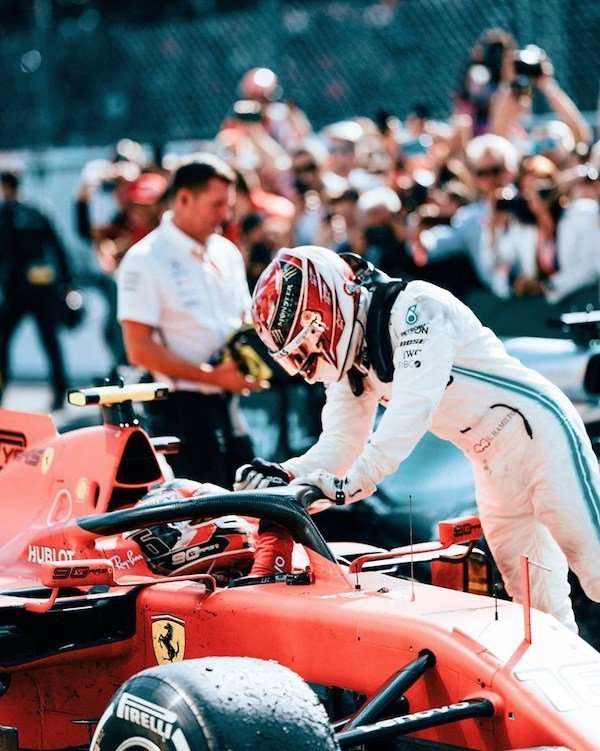 Things weren’t going well for Sergio Perez but recovering to a 7th place finish was a real win for both him and Racing Point.

A win for Antonio Giovinazzi who is the only Italian on the grid and brought home points in a weekend that fell apart for his teammate, Kimi Raikkonen. With Kimi’s weekend unraveling, Antonio picked up the mantle and ran home for points in 9th place and that is exactly what the team hired him to do and not something he’s done very much of in 2019.

Still leading the driver’s and constructor’s points and extend the latter’s lead with today’s result, it would be hard to say that the Italian GP was a fail for Mercedes to be honest. However, the team did have a legitimate shot and making their Medium compound long-run pace work and Lewis Hamilton tried everything he could to take the fight to Leclerc. Complaining of Leclerc’s defensive driving, Hamilton ran out of grip and had to settle for fast lap of the race. As Bottas inherited second place, he was unable to mount a challenge to Leclerc who had enough pace out of Parabolica and straight-line speed advantage to negate the DRS and Valtteri simply couldn’t make it work.

Lewis Hamilton and Mercedes attempted to ‘undercut’ Leclerc by pitting one lap before him, for medium tyres. Nonetheless, Leclerc’s pace was enough for him to emerge ahead of Hamilton after making his own stop for the hard tyre and defend his lead all the way to the finish.

A fail for Ferrari’s Sebastian Vettel who spun on lap 6 with an unforced error and then re-entered the track unsafely and hit Lance Stroll ruining the Canadian’s race as well as his own. Unlike the Canadian Grand Prix, the penalty for rejoining the track in an unsafe manner was exactly the right penalty and worthy of a 10s stop-and-go. Lot’s of head-scratching over Vettel’s performance of late and today’s Italian GP may have just sent the biggest message to date, there’s a new leader at Ferrari and he’s not German. 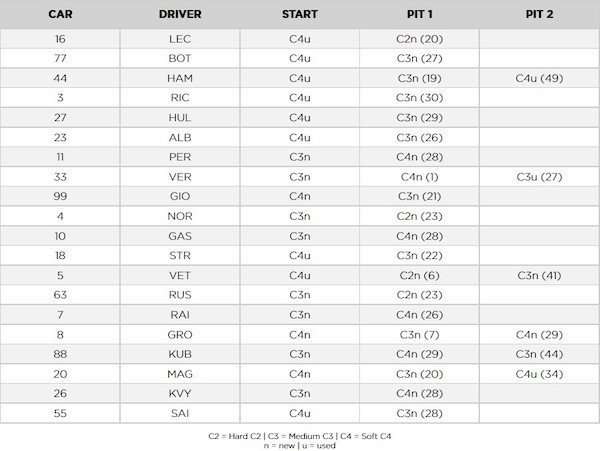 As an aside, Vettel was not happy with Leclerc’s unwillingness to follow team-agreed qualifying strategy and tow Sebastian for the second stint in Q3. Seb, was clearly upset about that but so was Mark Webber with the Multi-21 episode and Set has now been on the receiving end of a young, up and coming star who isn’t there to play wet nurse to Vettel’s career.

A fail for Lance Stroll who got mugged by Vettel when the German rejoined the track. Lance complained loudly about what an idiot Vettel was but then promptly did the same thing forcing Pierre Gasly off track.

A fail for Kimi Raikkonen who just looks out of sorts all weekend long. crashing on Saturday and then starting the race on the wrong tires left him 15th and irrelevant on Sunday.

A fail for McLaren with a loose wheel for Carlos Sainz leaving him out of the race and this put a lot of pressure on Lando Norris to maximize his recovery drive and to his credit, he did finish 10th for a point.

A WTH for Haas who looked ok for mid-field finishes but retired Kevin Magnussen and Roman Grosjean managed to just beat Robert Kubica.

A WTH for Williams F1’s George Russel who finished a very nice 14th and sure, there was attrition, but he beat his teammate once again and did a great job for Williams.

A WTH for Red Bull who, knowingly, weren’t going to be the quickest at Monza had targeted 6th place recovery for Max Verstappen but the best they could do was 6th and 8th and I’m curious why they didn’t do better given the lack of rear wing they were running. 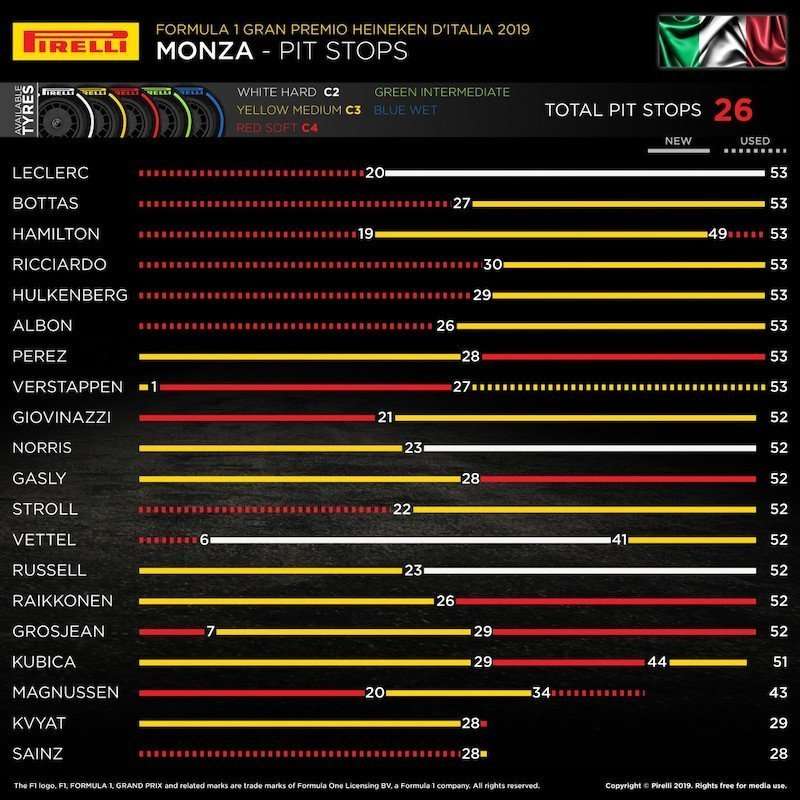 The king is dead, long live the king.

RIC did a good job, didn’t he!

Yeah, it was good to see them having a trouble free weekend and towards the pointy end of the field.
Hopefully at Singapore RIC can do well as he does seem to like the tight street circuits.

Glad to see LEC get two in a row. I know this is hindsight but I said at the beginning of the year Ferrari would regret the team orders which cost LEC points and buoyed VET. LEC was treated like crap the first 5 races. Now that the WDC battle seems to be LEC vs VER (and a not too far off BOT) those points are starting to look awfully… wasted.

How Ferrari react and what they do with Vettel or what Vettel does now will be interesting to watch. Can he find a second life as a tidy driver like Kimi who went from former F1 champ to a great teammate? Will he dig deep and resurge? Time will tell.

Too many WTH for Haas this season. I hope they do something about it.

Previous articleLeclerc on pole in Italian GP qualifying debacle
Next articleTPF Podcast: F1 Italian GP Review
Race Report: Ferrari's Leclerc holds off Mercedes for Italian GP winThere's the Ferrari fan boy part of me that's elated but remaining neutral about it, a Ferrari winning at home is a massive deal and very exciting...even Toto Wolff said so. What is more intriguing is how Ferrari will deal with the Vettel/Leclerc situation now that the young 2-time race winner has put his foot on the neck of the team, the German and the sport.