The Italian Grand Prix is known as the Temple of Speed and it is the home race for Ferrari. As tradition would predict, it was once again the Italian national anthem playing at the end of the race. Unfortunately it wasn’t for a red Ferrari.

Mercedes were trimmed out for downforce, relying on the shove of their dominant engine, but that made it difficult to pass on the long straights and along with a couple Safety Car period, their race went pear-shaped quickly.

In the end, the Italian team of Alpha Tauri took their first win of 2020—and first since 2008 with Sebastian Vettel—in the hands of Pierre Gasly and while the attrition, red flags, safety car periods all played into his hands, the team and Pierre capitalized on the opportunity to take victory ahead of McLaren’s Carlos Sainz and Racing Point’s Lance Stroll.

Huge win for Pierre Gasly who was jettisoned from the Red Bull team late last season but he has turned that demotion into motivation in 2020 and his consistency and terrific performances put him in a position to take his first win. A big win for the team who made the right strategy call and put Pierre and Daniil both in the points. At this points, given Albon’s struggles, many in the paddock are asking about swapping Alex and Pierre again.

A win for Carlos Sainz and McLaren for a brilliant 2nd place and a 4th place for Lando Norris. Lance Stroll’s free tire change may have cost Lando a podium but the rules are the rules. For Carlos, he needed one more lap as he was bearing down on Gasly on the final lap and clearly had more pace but ran out of time. Still, a big points haul for best-of-the-rest in the constructor’s championship run.

A win for Racing Point and Lance Stroll for a podium finish. Lance was the benefactor of being able to change his tires during a red flag session and that assisted but in fairness, Lance over-cooked the first lap after the restart and created his own drama giving up a good portion of his advantage.

A fail for Mercedes who had the front row locked out, car trimmed for higher downforce—banking on their superior shove—and Lewis ready to take another Italian GP win. None of that came to fruition as Valtteri Bottas had a bad start, struggled all day to pass anyone and said he had several issues he was managing that compromised his race. Lewis ignored a closed pit lane and suffered a stop/go penalty and spent the rest of the day in a nice recovery drive. Did the ban on “Party Mode” Hurt them? Conventional theory is that is hasn’t.

A fail for Renault who did so well in Belgium but weren’t able to beat their customer team in Italy. Ricciardo took a nice 6th with Ocon in 8th but with both McLaren’s ahead of them, that cold comfort.

A fail for Sergio Perez who came home in 10th but wasn’t Abel to run up front with his teammate and while strategy, flag and safety car timing didn’t help him, he was clinging on to a single point while his teammate, Stroll, was on the podium.

A big fail for Red Bull who took the win with their junior team but were unable to make a race of it with the big team. Max Verstappen’s retirement and Alex Albon’s 15th place finish was just book ends for a miserable weekend. Some suspect the “Party Mode” ban is actually hurting them more than Mercedes.

A big fail for Ferrari who qualified the worst they have done since 1984 and then both cars exited the race. A brake failure for Sebastian Vettel and a wicked crash by Charles Leclerc due to driver error. Thankfully he walked away from that massive shunt. Ferrari’s chassis, designed for last year’s engine with massive power, was simply too anemic for the Temple of Speed.

I am not sure what Valtteri Bottas was struggling with all day but his slow start, inability to make progress and lack of pace after the restart was befuddling.

While the broadcast was focused on Lewis Hamilton and his trundling at the back of the grid while the action happened up front, it was a good recovery drive given the struggle the Mercedes cars were having in the slipstream with heat and their difficulty in passing. Lewis did convert his misfortune into a points finish and that’s to be commended but what were we seeing with the Mercedes pace, trim and heat issues?

While it was great to see the paddock pay tribute to Claire Williams, I do wish Sir Frank could have made it to the race for a formal send off. IT’s the kind of thing he probably isn’t a big fan of but with the love the fans have for the team, it would have been good to see. Great to see the paddock pay their tributes to Claire and it must have been emotionally difficult for her to be sure.

There was a part of me that was hoping Kimi Raikkonen could have stayed in the top 3 to make it two Italian teams on the podium but he sank backwards to come home in 13th unfortunately.

“This is amazing! I’m lost for words! It’s unbelievable! I’ve been through so many things in the past 18 months and it’s better than anything I expected. I focused hard when I re-joined Scuderia AlphaTauri. Day by day, race by race, we improved ourselves and got stronger and stronger – this team gave me my first podium in F1 last year in Brazil and today, these guys gave me my first win in Formula 1, in Italy, in Monza, with an Italian team. I’m not someone who gives up on anything, I always fought for everything in my life until I made it to F1. Today it was a great day! When I was fighting the last few laps to keep P1, I knew how gutted I would have been if I had lost it, I wouldn’t have been happy with P2. I gave it everything I had – it was difficult – I pushed hard at the start of the stint to not give anyone the slipstream behind, then the last five laps were so intense, I almost shunted 10 times… I was pushing so hard! My tyres were gone but I wanted that win so much, it still feels weird to say I’m an F1 race winner. A big thanks to all of these guys here at the track and at the factory, in Faenza and Bicester, it’s a great day for them too. Most of them are Italian and the HQ is in Faenza, Italy, so to win the Italian Grand Prix is amazing. Thank you all.” 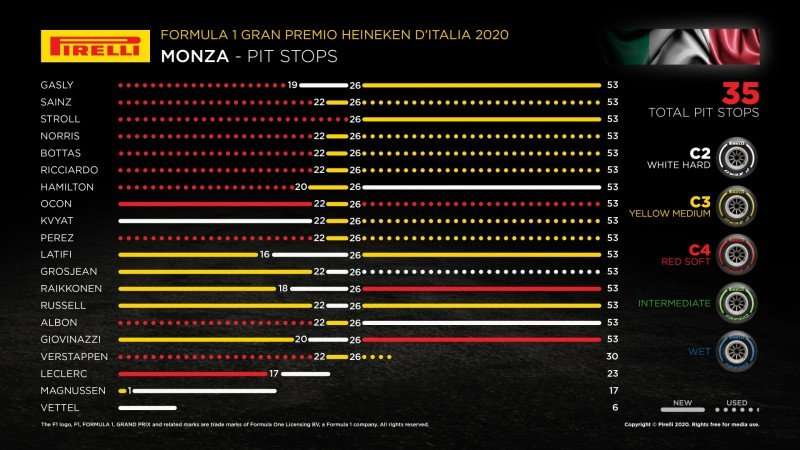 Perfectly articulated as always Todd. The one thing that I have taken from this Race is, most people think that next year will be “Much the same” as this year, i.e boring due to the regs staying the same. don’t see it this way. I think once McLaren have the new engine and racing point having had enough time to work out how the car actually works we could be looking at the possibility of 4 teams fighting for the constructors title. What do you think?

That’s definitely worth keeping and eye on. If McLaren can do this with a Renault lump, how will they do with a Merc?

It’s races like this that reminds me why I spend so much time following this spot. In the 30+ years I have followed f1, this one is up there in my top ten.

With a Merc Parked in the rear of the chassis. World championships I think. Not easy ones but definitely doable.

Anyways I’m going to get in early. Drive of the race. Pierre gasly Pass of the race. Very good move from the Williams family managed to leave the sport with the respect of millions, a few quid in the bank and no law enforcement agencies chasing them for scandalous behaviour. Donkey of the race. racing point should have won. Someone in that team threw away the instruction manual that came with the car when they purchased it. I hope they manage to find it over the winter break and work out how to use that car. Sorry for my dry… Read more »

To be fair to the Renaults, they were running 5th and 6th and then the red flag didn’t go in their favour, much like it didn’t go in Sergio’s favour.

Lance must be kicking himself, he could have won that race but then ran out of talent.

Yeah, I may be a little harsh with them but the SC didn’t help their efforts. Like usual, some get helped and others hurt by SC’s.

It’s such a good thing that Leclerc got out of the car.

This is the first race in awhile that I got up early to watch live. Glad I did.

Thought I was watching an F3 race when Gasly was swerving down the back straight trying to break the tow to Carlos. ﻿﻿