The Algarve circuit was the 73rd different track to feature on the Formula calendar but it was also the scene of the Lewis Hamilton’s chance to break the all-time win record of 91 wins. The track also represented a challenge in that it was resurfaced a month ago and had limited grip for the three hardest compounds Pirelli make.

It was this lack of grip that played perfectly into the hands of Lewis Hamilton who, apart from becoming one of the greatest in F1 history, has become an artist in tire management with these high-degradation tires. It is a key weapon that he adds to his superior Mercedes package to dominate the grid and he did so again to break the record of 91 wins on Sunday in Portimão.

The race may not have had multiple passing zones but the Algarve circuit acquitted itself very well by offering several names I would choose as drive of the race. Valtteri Bottas and Max Verstappen trailed Hamilton home to complete the podium but the action in the midfield was a terrific battleground for the teams fighting for best-of-the-rest.

A big win for Lewis Hamilton on a personal level by breaking the record with 92 wins (70 of those with Mercedes) and re-writing the history books. His race started in a dodgy manner with drizzle at the start and ceding two positions but he kept his cool, re-grouped and then set about moving to the lead and never looking back. The first name on my list of “Drive of the Race”.

A win for Ferrari’s Charles Leclerc who finished in 4th place in a car that has worked hard to disappoint him all season long. The qualifying performance was my pick on Saturday but his race was equally wonderful and a real boost for the team by endorsing the upgrades they’ve brought. The second name on my “drive of the race” list.

A win for Alpha Tauri’s Pierre Gasly who finished 5th and gave the team another fantastic haul of points. In fact, Pierre has given the team the most points of any other driver and he is the guy who I believe Red Bull should give another chance to by moving him back into the seat currently occupied by Alex Albon. He is also the third name on my list as “Drive of the race”.

A Win for Carlos Sainz who finished in 6th and this was critical for McLaren and their battle against Racing Point in the constructor’s championship. The race started in terrific form for both McLaren’s and Carlos even led the race briefly thanks to his Soft compounds at the start but he struggled with graining quite a bit (more than some teams) and still managed to beat the Racing Point of Perez.

A Win for Sergio Perez who had an incident at the start and engaged a recovery drive and tire management to limit the damage in the Constructor’s championship since Lance failed miserably. His 7th place finish just behind Sainz staved off a huge points haul for McLaren and leaves the two teams with just two points between them in the championship. With Racing point at 126 to McLaren’s 124, Sergio’s performance helped the team keep the lead. Especially with Lance’s failure and Lando Norris out fo the points.

A win for George Russell who took the grid’s door stop and managed to get it up into 14th ahead of much faster cars. The rumors of his possible boot at Williams seemed to put a fire in his belly and this was a result that shows this young man deserves a better car and a place in F1 even if Williams is searching for drivers with big wallets.

A Win for Esteban Ocon’s 53-lap stint which was quite impressive. Regardless, you do have to hand it to them as their strategy overcame the tire issues and gave the team a dual-points finish that has them just six points away from third in the constructor’s championship and with Racing Point’s Stroll and McLaren’s Norris out of the points, this was good result.

A fail for Lance Stroll who had a ham-fisted weekend eventually retiring from the race. His lack of points puts Racing Point in serious jeopardy of losing third in the constructor’s championship and Sergio’s recovery drive was the only thing that held the papaya orange team off this weekend.

Despite Leclerc’s terrific performance, Sebastian Vettel’s was a recovery drive to 10th but still left Ferrari on the outside of the constructor’s battle for third. With 93 points to Renault’s 120, McLaren’s 124 and Racing Points 126, surely Sebastian could help in getting the red team up to third and given Leclerc’s results, the pace is in the car but Sebastian isn’t extrapolating that performance in to results.

A fail for Red Bull’s Alex Albon who has been put on notice but team boss Christian Horner. His 12th place didn’t go very far in answering that notice.

Not sure what happened to Haas F1 with both drivers at the back of the grid but it is odd that neither could manage to make a race of it with the Alfa Romeo’s.

A WTH moment for Lance Stroll who looked out to lunch all weekend. While team boss Otmar was quick to say he’s just rusty after missing the last race, I have to think that if you are rusty this far into the season despite missing the last race, you may not be doing it right. It is an odd performance as he had been doing quite well of late.

A WTH with the drain covers as I would thin that the concrete channeling that holds the metal covers might be something they would check prior to F1 cars hovering them up.

I agree with Martin Brundle, the DRS zone was too long/strong. 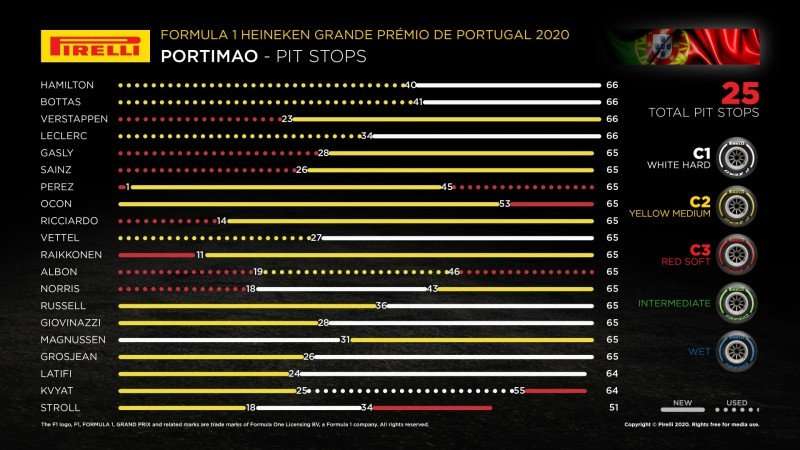 Another site said that Haas had a overheating problem that effected their suspension. Seems kind of odd, but such is Haas this year.

Let’s start with, Hamilton is great. The problem I have is that there are three types of drivers in formula one. There is the driver determined to win. There is the driver who is a racer at heart. There is the driver with technical ability. This course without DRS enabled showed the true racers. the moment DRS was allowed the racers were compromised and the race became boring.
Racers on show? Sainz and Kimi. How do I know they were racers? Because they could pass without the trickery of DRS. The rest of the race was predictable.

Here’s a question for though. If you could put any other active driver in Bottas’ seat, who if anyone could beat Hamilton?

Probably no one currently… first off, he’s a determined to win driver. That makes champions (think Schumacher), secondly, MB know who their $ winner is for the team and you can be sure there’s always something extra for him with the car. And that’s fair in a commercial enterprise. Now, Hamilton has great skills, but without DRS I doubt he could have won. DRS is a trick device to make it SEEM like there’s real racing, when in fact it is a procession favoring the fastest car in a straight line.

In my opinion the inferiority of the second driver is a component of Lewis’ success. He is fabulous, but fragile. One thing goes wrong and conspiracy theories and hurt make him seem deranged. So it’s not really a question of is any driver good enough to beat him, it’s more like could you put someone in the other car who’s good enough to get Hamilton to beat himself? Yes. LeClerc could do it, Verstappen could do it, Russell might be able to do it. Sainz could maybe do it because he’s racingroyalty and Hamilton has massive inferiority wounds. I would… Read more »

Hmmm, I would tend to agree with you. LEC, VER, and RUS were my list too. And you also pointed out what I’ve observed; that HAM gets rattled pretty easily. Honestly Bono is at least 25% of HAM’s success because he is so fragile mentally (meaning that he lets little things get to him). As Peter pointed out too though, would another driver be given a fair shake by Merc? I remember last season when BOT won the first few races and Merc were all behind him, and then as soon as HAM won his first race, the script flipped… Read more »

Previous article
FIA replace Portuguese GP steward, Petrov, after death of his father
Next article
The Parc Fermé F1 Podcast Ep 705 Portuguese GP Review
I enjoyed this race and specifically, I really enjoyed this track. I feel like the DRS zone was too long but it was a fun race to watch. Congrat's Lewis!! Race Report: Hamilton breaks all-time win record in Portuguese GP