The season-opening Formula 1 race lived up to its hype with a very tight battle for the win between Mercedes driver Lewis Hamilton and Red Bull driver Max Verstappen. A late pass for the lead of the race by Verstappen saw him go wide at turn 4 and off the track. Max gave the position back to Lewis but couldn’t mount a final challenge handing the win to Mercedes and Hamilton.

Lewis drove a terrific race by pitting early to prevent the undercut by Red Bull but his ability to manage his Hard compound tires, that were 10 laps older than Max’s, on the final stint was a fantastic performance and one that you might expect from a 7-time champion.

Mercedes captured the win with Lewis on 27-lap old tires and also secured third with Valtteri Bottas bring it home with the fastest lap point.

A win for Mercedes who entered the weekend with a slight limp after a challenging testing session but they covered the undercut and relied on Lewis’s ability to manage tires which he did superbly. It was the creative strategy on the fly by Mercedes that saw the wear rates of the earlier set of Hard compounds and made the adjustments they needed to get back in the race and win it. Lewis did a fantastic job of holding Max off even though he had newer tires to take the win.

A win for Red Bull and even though they didn’t take the top step, they showed that they have the pace to at least keep Mercedes honest. If this performance parity remains for the different types of tracks on the calendar, it will come down to team strategies and the exceptional talents of all four drivers at Mercedes and Red Bull. Max looked terrific even though he was nursing a throttle issue and Sergio Perez started from pit lane due to an electronics issue. The real key is that hiring Sergio delivered exactly what Red Bull needed as he drove all the way back into 5th place and that’s the kind of driver they need in that second car. Red Bull should take a lot from this race.

A win for McLaren’s Lando Norris who had a terrific run to 4th place ahead of his veteran teammate Daniel Ricciardo who finished down in 7th. Clearly Ferrari have regained some pace and that could make life difficult for McLaren as “best-of-the-rest” but Lando finished ahead of Ferrari and that is key to McLaren’t season. Ricciardo’s race wasn’t as complimentary to the car as he struggled for pace and was finding the tire grip levels a real challenge.

You have to see Ferrari’s race as a win compared to where they were in 2020. Charles Leclerc drove a terrific race to finish 6th and Carlos Sainz ended in 8th. Not where they would want to be, ultimately, but it is a move forward from last year. A key here is the missing element which was Alpha Tauri who struggled. Regardless, a move in the right direction.

A small win for Alpha Tauri’s Yuki Tsunoda who claimed his first points in Formula 1 finishing in 9th.

It was a fail for Aston Martin who were battling for “best-of-the-rest” in 2020 but Lance Stroll’s 10th place is not where the team were hoping to be and Sebastian Vettel starting from the back of the grid was not optimum. Vettel’s clash with Ocon was also very disappointing and not becoming of a 4-time champion.

It was also a fail for Alpine with a DNF for Fernando Alonso and 13th place for Esteban Ocon. This isn’t where the team ran in 2020 so stepping backwards makes you wonder if their lack of engine development—now frozen for three years—is going to be a real challenge for not only 2021 but over the next couple of years. Let’s hope not and Alonso’s pace early on would perhaps suggest not. Unfortunately they just couldn’t capitalize on Alonso’s early pace.

A fail for Haas who finished last and perhaps the most painful was the first-lap crash by Mazepin. For a team on life support, damage like that is something they can’t afford.

During the race, Mercedes drivers were using the run-off with regularity but when Red Bull radioed Max Verstappen to do the same, the track limit ban seemed to reappear and this played a big role in the race win as Max made the pass on Lewis cleanly but used the run-off, after passing Lewis, and ceded the position as instructed by the FIA stewards. Some believe that’s an arguable situation to reverse the results of the race. Others do not.

For me, it is a fail if the FIA can’t get this stuff sorted out prior to the races. Changing the rules two or three times and even during the race is just very junior league and this needs to get solved. 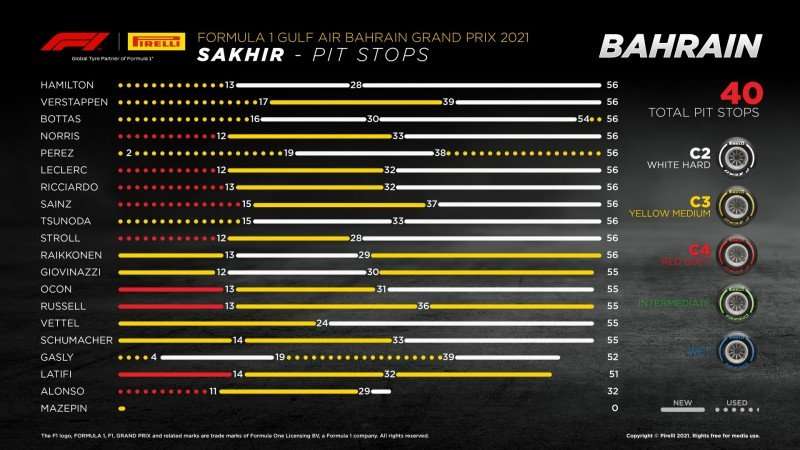 Very enjoyable start to the season. However enough is enough. Time to put sensors on the car and track and sort out the track limits once and for all.

My son now calls him Mazespin.

I’ll never understand what the FIA thinks it means by “lasting advantage.” If LH gains 0.25 seconds, for example, every lap by going wide at Turn 4, that is a lasting advantage of 7.5 seconds over 30 laps. Whether he passed someone or not isn’t the issue; he’s advantaged by the move. But after he was told not to leave the track there, LH was obligated to not defend against MV by leaving the track. Seems obvious that LH was then disadvantaged, and MV had to be ordered to give back the spot. Inconsistent, sure. But also fair in the… Read more »

Max’s comments in the press have all been about tire strategy, but in the end, I think he has to blame himself for not pulling off the move. We’ll never know, but I can’t help thinking that Lewis’ would have done it cleanly if the positions were reversed.

This will be the first season that Max is expected to contend for the title. Up till now, he’s been the underdog. Now he is arguably the favorite for the championship. It will be interesting to see how he handles that pressure.

Previous article
Verstappen beats Hamilton to pole for Bahrain GP
Next article
Bahrain GP review | The Parc Fermé F1 Podcast Ep 725
There was a lot of hype and to be sure, it was worth it. Great to see another team run there or thereabouts with Mercedes and make Lewis fight for those wins. A fun race to watch. Race Report: Hamilton holds off Verstappen for Bahrain GP win