Lewis Hamilton has moved even further into rare air as a double World Champion in Formula 1 with his dominant win in Sunday’s Abu Dhabi Grand Prix at the Yas Marina Circuit.

The 2008 champion cemented his second world title from the very start with a terrific start off the line to take the lead and never looked back. The British champion said it’s not in his nature to come to a race and shoot for second and he proved it today with a little help from his teammate, Nico Rosberg.

Rosberg needed help of his own this weekend. Sitting 17 points adrift of Hamilton, a win was not enough for the German—he needed Hamilton to finish third or worse and that was never going to be an easy bet given the performance advantage the Mercedes cars had over the rest of the field.

In essence, Nico needed a mechanical failure to thwart Hamilton’s race but fate would deal a lethal blow as it was an ERS failure on Rosberg’s car that ultimately ended his title hopes.

After the race, Rosberg said that even if had not had the ERS issue, beating Lewis was never really in the cards such was the champion’s pace. Nico did make his way to the waiting room to congratulate Hamilton and offer his praise of the newly crowned champion. Even Prince Harry radioed his congratulations to Hamilton after Lewis crossed the finish line.

“He was this year that little bit better so it is fully deserved. He was the best driver on the grid this year.

“It was a great battle between us, and that’s what I race for. It was a very intense time of course, but also fantastic. Having such a strong car has been unbelievable.”

Lewis drove a measured race after his lightning start and held the gap when he needed to while nursing his car home having been given the news of Rosberg’s troubles. Hamilton slowed to near two seconds per lap off his pace in order to get his venerable power unit home in one piece and came under fire in the waning laps by a motivated Felipe Massa.

“This is the great day of my life,” Lewis said. “2008 was a special time in my life; the feeling I have now is way, way past that and above and beyond. It’s the greatest feeling I’ve ever had.

“This has been an incredible year, I cannot believe how amazing it has all been – coming to this team, when people said it was the wrong choice, and the steps we took last year and this year is unbelievable.

“This is like an outside-the-body experience. I want to make sure I give my thanks.”

With the mileage stacking up on all the engines in F1, Lotus F1 driver Pastor Maldonado reminded the entire grid just what could happen as his engine terminated itself in dynamic fashion during the race.

The race itself was an average affair and while there where moments of decent racing and DRS-enabled passing, NBC Sports anchor Leigh Diffey ran out of over-blown adjectives to heap on to the grand prix to save it from being a pedestrian affair. Lewis’s title was the high-water and that is as it should be though. It would have been terrific if Nico hadn’t experienced his ERS issues but perhaps it’s a bit of comeuppance for a team who demanded complicated hybrids to offer a damp squib of a title-deciding race due to some bizarre ERS hybrid cock up.

It’s a big win for Lewis Hamilton who said this is the greatest day of his life—although we’ve heard that at least three times per year from Lewis, I’m inclined to believe it this time. It was hard to understand exactly how a guy who wins 11 races could still be at risk of losing the title but thanks to double-points, that was the case. Regardless, Lewis handled it impeccably.

It’s been a while coming and Lewis has been through some challenging times since 2008 but this year he had his head down and his focus in the right place to secure his second title. The season is a win for Lewis in many respects.

Also a big win for Williams who scored its first double-podium result since Monaco in 2005. Felipe Massa was charging at the end but ran out of tires in order to mount a realistic pass for the lead. His teammate, Valtteri Bottas, claimed the third step on the podium. That’s a big win for the team who secured 3rd in the Constructor’s Championship with Bottas claiming 4th in the Driver’s Championship.

A win for Sergio Perez who took advantage of the double-points and finished 7th in the race which in turn gave him 10th in the driver’s title race. His teammate, Nico Hulkenberg, also did well with a 6th place finish on the day and this was even after a 5-second penalty was assessed to the German.

Red Bull’s Daniel Ricciardo had a win on Sunday as he started from pit lane and marched his way up to 4th while providing some great passes and driving in the process.

Jenson Button had a great day finishing 5th and while the result was great, his post-race donuts on the track sent shivers down my spine that he was celebrating his last time on a Grand Prix circuit in F1.

The 16th win for Mercedes this season has broken the all-time record of 15 previously held by Ferrari and McLaren. Hamilton also becomes the first Mercedes world champion since Juan Manuel Fangio, having claimed 11 victories in total this year.

A win for Will Stevens to complete his first F1 race even though his team didn’t take the fight to anyone.

Mercedes gets a fail for the ERS problem Nico Rosberg had. The team bosses were almost foreshadowing the weekend by saying that a mechanical issue would be a real tragedy if the title was decided by something on the car failing. That notion seems to be lost now that Rosberg was the recipient of the ERS issue with post-race commentary from the team offering platitudes about Nico living to fight another day and boy didn’t he do a good job this season. While team boss Toto Wolff says the ERS issue is a bit of a bummer, it wouldn’t have changed the results anyway so let’s not bicker and argue about who had ERS issues.

A big fail for Ferrari who had a guy finish outside the top 10 in the driver’s championship and another one seemingly phone it in for his final race for the team. A difficult year for the Scuderia and let’s hope Sebastian can find the “utmost and commitment” to bring the team back.

NBC Sports waited until near the end of the race to half-heartedly mention that young star, Daniil Kvyat, had…oh, by the way, stopped on track and is out of the race. Uh…thanks.

Caterham made it to the race and that’s great but they failed to mount any challenge for 10th place in the championship while Marussia couldn’t even crowdfund their way to the race in order to collect their 10th place and $30 million. This, if I have my math right, leaves Sauber—who scored no point sand looked miserable all year long—as the 10th place finishers for 2014. What an odd way to back yourself into the points and money.

I enjoyed Nicole Scherzinger’s pensive and pouty entrance to the paddock in her LBD and her “friend” who appeared to be in some sort of skimpy bathrobe. I may have seen more of them than Lewis and that’s not helping Nelson Piquet’s obsession with Nicole by the way. Regardless, I am sure it was a big emotional boost for Lewis as well as a carnal boost for Nelson.

The NBC Sports crew explained how this season was the best one in the last 30 years. Let that soak in for a moment. You feel it? Yeah, me too. The massive network also decided to cut away to a special Jenson Button graphics package—during the race—in order to really unpack the career and future of the 2009 champion. I like Jenson as much as the next guy but I care very little about his career highlights when there is racing actually happening.

Speaking of NBC Sports, I’ll be glad when they get new B Roll of Lewis and Nico. The continual use of the highly bleached video of the two walking around in a sterile garage is getting old, I think I’m starting to dream that B Roll in my sleep now. Every time my dream comes in to focus, it then cuts away for a commercial and that’s really frustrating.

In the end, it all finished the way Lewis wanted and I suspect Bernie Ecclestone is perfectly happy with it as well: 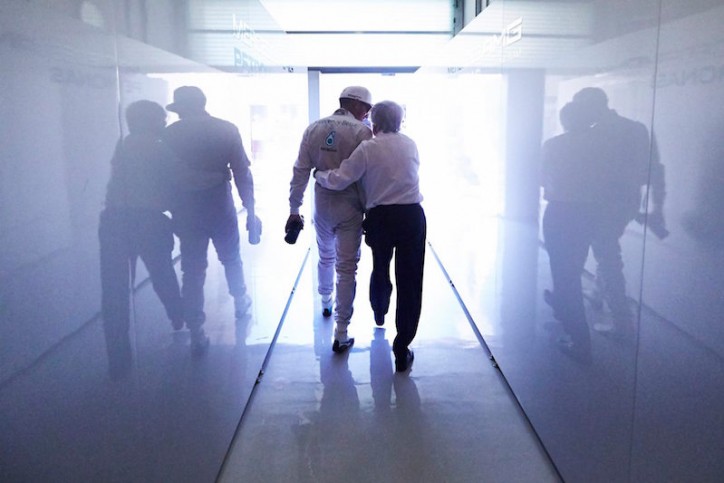