I enter each race weekend with eyes wide open. Sure, the Mercedes has had a baked-in advantage for seven years now and the Barcelona track is not easy to pass on but in the end, anything can happen in Formula 1 and I tend to let events unfold before crowing about the lack of passing or Merc domination.

In the end, the 2021 Spanish GP was a strategy race and it came down to, effectively, six (6) laps that made the difference but the details were much greater than that. Lewis Hamilton converted his 100th pole position into a win with a late-race pass on Max Verstappen leaving Valtteri Bottas in third.

A win for Mercedes who surely knew their pace on the medium tire was very good. Why else would they run through so many soft compounds in Free Practice and qualifying? Even Sky F1 commentators were surprised that Lewis improved his Q2 lap time on scrubbed softs.

In the end, Red Bull either missed that or they knew it but had very little to answer for it. During the race, Max had things in hand even after the restart. As Paul and I watched, he was feverishly texting me saying he’d box Max again in a 2-stopper due to the pace of the medium tire. He was right on the surface of it because that’s exactly what Mercedes did. This left Max on s-lap older Mediums and that was enough for Lewis to win.

We could argue, strongly, that Red Bull knew that option too, of course, but perhaps Merc flinched first and to answer their move was a nail in the coffin. Slightly easier to make that call when you are following and not leading.

Regardless, Lewis had to execute and execute he did by dissolving a 23s gap and taking the win. A perfect execution of driver, machine and strategy and that is why Mercedes is still the team to beat in 2021 despite the advances Red Bull have made. I think Max Verstappen realized that sobering thought this weekend.

A win for Max Verstappen who drove a good race after a very good start. A head’s up move by positioning his car in the start box where the previous support races had laid rubber down. Unfortunately I was biting my lip thinking that whatever slight gain they may have on Merc would be instantly neutered by that awful DRS construct but Max held Lewis off. It wasn’t until the Medium tires were fitted and a slow stop by Red Bull that the true pace was revealed and that was out of Max’s hands.

A win for Charles Leclerc who quietly took 4th and got Ferrari just 5 points behind McLaren for best-of-the-rest. A great result for Charles and a much-needed result for the team in the battle for third in the constructor’s championship.

A win for Pierre Gasly who was on his own out there for Alpha Tauri and he managed to make the best of a 2-stopper, going soft-medium-soft, to keep 10th with some good overtakes late in the race.

A fail for Red Bull who got caught out by the strategy that Merc deployed but in fairness, they may have known this achilles heel heading into the weekend. They just didn’t have the pace on the mediums and either they knew that or they weren’t willing to gamble like Merc did with a 2-stopper. Once deployed, Red Bull had no answer and that’s most likely because boxing Max at that time would have placed him in traffic. There are many permutations and one has to consider that Red Bull knew them all but in the end, they were beat on strategy.

A fail for Sergio Perez who struggled in qualifying and while he recovered to 5th, Max sure could have used his help up front. As it is, Sergio’s weekend left points on the table and that means that Merc moves to 141 constructor points versus Red Bull’s 112. That is where Perez, Albon and Gasly are/were hurting the team. The team could have kept Albon but they put a veteran in the seat to score maximum points. Sergio has to raise his game.

A fail for Alpine who has looked much better over the last two race weekends. Unfortunately Esteban’s good qualifying was betrayed by a 1-stopper that didn’t quite work and Fernando was struggling with tire degradation which prompted a late box for fresh rubber. The upgrades are working but the team need to get Alonso comfortable in the seat and on top of the tire wear and degradation. Much easier for me to say than for them to do.

Not quite sure what was hampering McLaren’s Lando Norris this weekend. I’m inclined to think it is track specific but he just struggled for pace. His teammate, Daniel Ricciardo, fared much better by finishing in 6th so that’s good but they did find themselves behind Ferrari and that makes for a tight battle in the constructor’s points.

There were moments this weekend where Aston Martin looked better but come race day, the team struggled for pace with Vettel in 13th and Stroll in 11th. There’s no doubt the team are working hard to solve their deficiencies but it’s difficult to see them this far down the order.

Valtteri Bottas didn’t seem too keen to give Lewis the position and in my mind, that lends some credence to the rumor that he may be up for a possible swap with Russell and he isn’t happy about it. Why else hold Lewis up? Valtteri is deep into the Barrichello world at this point. There’s no way out unless he leaves the team and that is the decision Ruberns made and I think he was happy he did. Going back to Williams with new owners and new team? I think Rubens felt it was better to be a team leader at a small team than to be a clear wingman #2 at the top team. 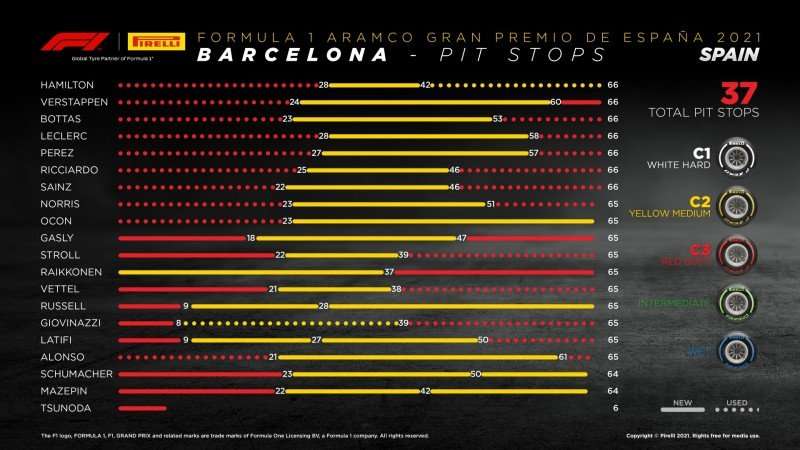 In prepping for teh podcast, I realized that Red Bull only had one set of Mediums for Max so even if they wanted to box twice, they didn’t have the rubber. Makes more sense although I wonder if they caught the story during Friday and Saturday that Merc was saving Mediums and using a lot of Reds.

If I’m not mistaken Perez DID have a second set of reds to go onto though. Irregardless of made up words though, both cars and drivers were all but equal, however the team strategy was the difference.

Another podcast, regarding Bottas, suggested that he may be tipped that this is his last season with Merc. Expect more love wolf activity this season, if true.

Lewis’ drive very much reminded me of MSC when he was totally dominant. They needed him to bang out almost 20 quali laps, no problem.

Also to be fair to Giovanazzi, he was stuck in the pits for over 40secs.

Indeed. Gio had a tough day and it wasn’t his fault. We mentioned that on the podcast. Agreed on Lewis, and inspired drive to execute a brilliant strategy.

Previous articleTsunoda apologizes for comments about Alpha Tauri
Next articleSpanish GP Review | The Parc Fermé F1 Podcast Ep 731
Race Report: Hamilton & Mercedes beat Verstappen for Spanish GP winThis wasn't a bad race despite the reputation of the circuit. I like a good strategy battle and this delivered in spades.