After running afoul of a rear wing measurement and having his qualifying disqualified, Lewis managed to recover from P20 to P5 during the sprint race with a terrific drive. As he headed to Sunday’s race, his engine change carried a 5-place grid penalty which meant he would start from 10th. Once again, Lewis took advantage of a fresh engine with massive straight-line pace and a wonderful battle to go from 10th to victory for the Sao Paulo Grand Prix in Brazil.

Mercedes were not happy with everything that transpired in Brazil. They made a very good call to change engines here but the wing penalty was unplanned and those are the kinds of things that can throw a team off the scent but they kept their heads down relied on Lewis to cover their error and take the win ahead of Red Bull’s Max Verstappen and his teammate, Valtteri Bottas in third.

A big win for Lewis Hamilton and Mercedes. The team were nursing an engine change—and it was the right track to make the change—but the wing penalty was a tough thing to overcome and it’s one of those things that the team had to rely on Lewis to overcome on track. Lewis overcame it and managed to take advantage of the fresh shove in that engine and maximize their straight-line speed to hunt down the Red Bulls. It’s not that the team didn’t equally work hard to help Lewis recover but he had a lot of work to do and he did it like a champion would.

A win for Valtteri Bottas who got back on the podium despite not agreeing with the strategy call from Mercedes but he managed to keep Sergio Perez behind him and that’s big for the constructor’s championship.

A win for Ferrari who engaged a 2-stop strategy to get Charles Leclerc and Carlos Sainz in 5th and 6th respectively and well ahead of McLaren for a terrific points haul in the constructor’s championship.

Also a win for Alpha Tauri’s Pierre Gasly who had a great race and finished 7th and continues his streak of good results and keeps the team in the points and challenging in the constructor’s championship.

A win for Alpine to get both Esteban Ocon and Fernando Alonso into the points in 8th and 9th respectively.

Finishing second and retaining the driver’s championship is hard to consider a fail but for Red Bull’s Max Verstappen lost 7 points in the driver’s championship to Lewis Hamilton and he now faces three races where straight-line speed is critical so the team have a lot of work to do. The fast lap point for Sergio Perez was a help but they will need to consider their final three races and if they truly believe Mercedes is doing something outside the regulations, then they’ll need to lodge an official complaint.

A fail for McLaren who had a DNF for Daniel Ricciardo and only a P10 for Lando Norris. They are bleeding points to Ferrari in the constructor’s championship. Ferrari’s engine upgrade this fall seems to be working but McLaren haven’t answered so far. Will the remaining races flatter McLaren? Time will tell.

A fail for Mick Schumacher who managed to take off his front wing and allow Nikita Mazepin beat him. Also a fail for Nicholas Latifi who languished in P16 while his teammate, George Russel, was up in 13th with an inspired drive.

Not quite sure what Yuki Tsunoda was doing out there but his clash with Lance Stroll wasn’t optimum and Lance had his own moments out there with a damaged car.

It is interesting to see the difference between Mercedes’s pace with their fresh engine and the pace of Aston Martin and McLaren (loss of power for Ricciardo) and you would be left thinking that the difference is in the chassis so if either team want to make a run for the sharp end of the grid, they have a lot of work to do to get there despite having equal shove in the back of the car. 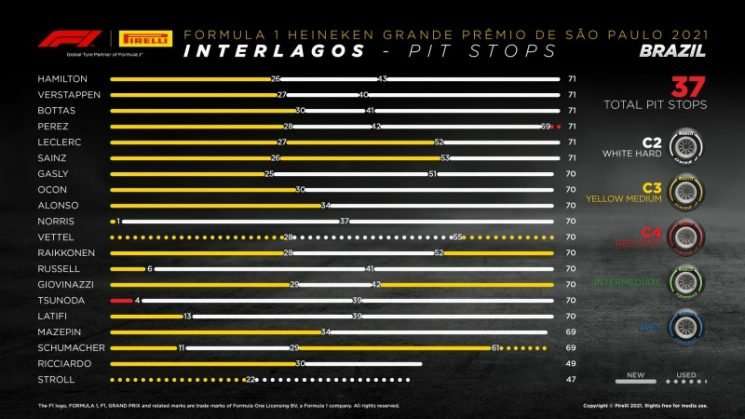 Don’t want to be a pedant, but Max only lost five points because of the sprint race.

Also, Bottas really needs to work on his starts, because at the moment it’s a case of “Valtteri, it’s Christian…..”

Previous article
Bottas on Pole in Brazil after Sprint race win
Next article
São Paulo GP Review | The Parc Fermé F1 Podcast Ep 757
What an epic comeback for Mercedes and Lewis Hamilton to fight back from a penalty DQ and a penalty to take the win!Race Report: Hamilton overcomes adversity to win in São Paulo