The only thing that could make a freshly resurfaced track more slippery is water and the race started on a very damp track which seemingly played right into Racing Point’s hands with Lance Stroll on pole.

Racing Point was looking good early on but the veterans soon dropped Stroll and showed why experience in changing conditions on a new tarmac is something that takes years and skill to conquer. Mercedes, who looked on the back foot all weekend long, managed to make their deficit of being gentle on their tires into a strength in the hands of Lewis Hamilton who not only secured the win but also his seventh world driver’s championship. Sergio Perez and Sebastian Vettel founded out the podium.

Big win for Mercedes and Lewis Hamilton who plied their masterful skill in staying patient and letting the race come to their strengths. Lewis’s personal achievement of seven titles is an amazing feat and coupled with a champion’s drive in Turkey and a team as complete as Mercedes, their dominance of the sport is unrivaled.

A win for Racing Point’s Sergio Perez, who is without a ride for 2021, for a brilliant performance to second place. Sergio’s wise and tire-sensitive drive is a hallmark of his skills and compared to his teammate, his race craft was superlative in a very challenging race.

A win for Ferrari who struggled all year but came alive in this low-grip race. Sebastian Vettel’s calm head took advantage of his teammate, Charles Leclerc, when the youngster cooked a passing attempt on the last lap. Vettel nabbed third, a place a more patient Leclerc may have taken. Regardless, Vettel and Leclerc had a terrific race and a much-needed result for Ferrari. Maybe team boss Mattia Binotto should manage the team over Zoom calls more often.

A win for McLaren who are in a fierce battle with Racing Point and Renault for 3rd in the constructor’s championship. With Sergio Perez on the podium, McLaren had to deliver and thankfully Carlos Sainz made a fantastic drive to 5th with Lando Norris in 8th. They may have lost a few points to Racing Point but finishing ahead of both Renault’s, they put a 13-point gap between them.

A fail for Red Bull who looked to be the quickest cars on the grid for the slippery track but a poor start from Max Verstappen and an impatient passing attempt on Perez dropped him back to 7th. His teammate, Alex Albon, had a chance to challenge for a win but his tires eventually let him down and he spun ending his chance for heroics and this left him in 8th. On a day that Red Bull could have made a real run at the victory, they managed to struggle to stay in the top 10.

A fail for Lance Stroll who parlayed pole position into a 9th place result due to graining on a set of intermediate tires and a lack of experience on managing the race from the lead. The veterans around him measured the race with race craft that comes with the wisdom of time spent in F1. Lance needed this pole position as he’d struggle of late so he can’t feel too bad about dropping out of the lead as the Wiley veterans like Hamilton, Perez and Vettel passed him.

A fail for Renault who had a good start but some wheel banging and missed corners due to a lack of grip dropped them down the field and behind McLaren by 13 points for 3rd in the constructor’s championship which is worth $10-11 million.

Not sure what happened to Valtteri Bottas but he looked like he was driving on a track full of ball bearings. Finishing just ahead of Kimi Raikkonen, these two from Finland should have been rich tat home in this slippery condition.

Also not sure why Alpha Tauri struggled so much given their recent form but missing out on the points is a tough day at the office.

Also appreciated the numerous replays of incidents on track while missing the live incidents prompting more replays of missed action which, again, missed the live action. At some point we were watching most of the action in replay and not live. 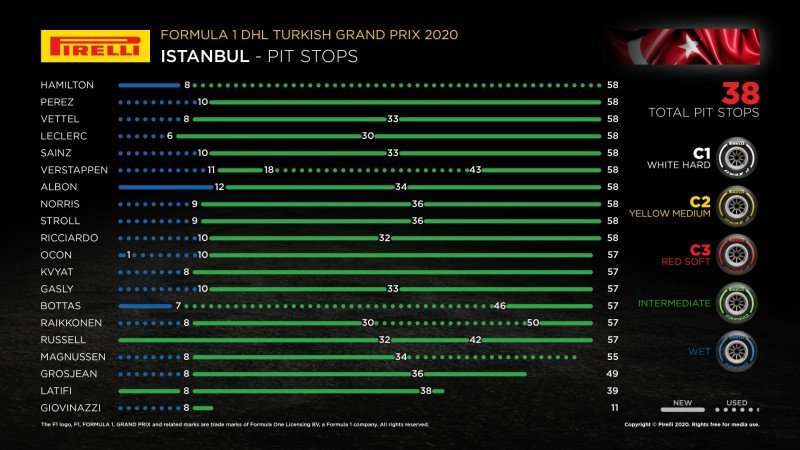 Hang on hang on. If you look at the race before the dreaded DRS was enacted, the racers were all in the lead. Add in the DRS and the cheap and cheating passing? Predictability started to reign.
if ever there was proof that DRS ruins formula 1 this race up to about lap 23 proved it.

Well, you don’t have to convince me that DRS is a construct. :)

Amen Todd, amen. Why can’t they see that? Or is it really a means to skew results to the bigger teams consistently?

Hmm I feel like this is a really good point I hadn’t noticed that correlation. Like so many things, I’m not sure it’s all one way or the other, a stifling bottleneck can certainly ruin a race too. But under these conditions the race was fascinating without DRS and probably should have continued that way.

It’s a balancing act for sure but I feel like we’ve been operating for too long with a finger on the scale.

Can you remember ever seeing another race where wets/inters were used the whole race, but it never once rained? Pretty unique!

That’ s a good question, I can’t recall one off the top of my head.

Previous articleRacing Point Strolls to pole for Turkish GP
Next articleThe Parc Fermé F1 Podcast Ep 708 Turkish GP review
A lot of fun to watch with no grip and a wet track which separates the men from the boys. Watching the veterans come up through the field and seeing Lewis's patience in letting the race come to him was a lot of fun to watch. Negative CamberRace Report: Hamilton takes 7th title with champion's win at Turkish GP