There’s no doubt that when it’s raining during a race, It changes everything but the second most impacted form of racing is in changing conditions. A wet track that is drying at varying degrees over different corners is a real tiger to tame. When you add continuous threats of possible rain coming, strategy goes out the window and teams engage in tactical, lap-by-lap strategies. That’s how the Hungarian Grand Prix played out on Sunday.

Lewis Hamilton was looking for his 8th win at one track and the Mercedes, based on two race in Austria, is the car to deliver that to him. Converting a pole position to a punishingly dominant win, Lewis got his win. He was followed by Max Verstappen who his suspension on the installation lap in an inspired drive to hold off Valtteri Bottas who finished in third.

A big win for Mercedes. This season, as well as the car’s performance in Hungary, looks as dominant and untouchable as the 2014 season when the Hybrid formula was first raced. This version of the Mercedes seems completely planted, sure-footed and any onboard camera from Lewis’s car will reveal just how little steering input he has to provide to get the best out of his car.

A big win for Red Bull Racing who managed to repair Max Verstappen’s suspension in 20 minutes in order to start the race. Max, in a redemptive drive, made a great start and the team managed the strategy to get the Dutchman up to second despite a car that is proving to be a real handful. Max’s performance in the race gained him the f1.com vote of Driver fo the Day and that’s hard to argue with given what he and the team overcame to secure a podium.

A win for Alex Albon who managed to recover to 5th. Given the struggles Max is having, one can have some patience for Alex’s difficulties with this year’s Red Bull car. Recovering to 5th was a good job from Alex and the team were right to praise him for the effort.

Watching the vote count live during the race, I was surprised that Lance Stroll wasn’t even in the top three vote-getters given his 4th place in Hungary. Sure, he got undercut by Valtteri Bottas for a podium but as previously mentioned, that Mercedes is in a class of its own. Still, Stroll bested his teammate (which adds fuel to the rumor mill about Sergio Perez’s motivation and possible discussions with Sebastian Vettel about his seat), ran up front all day and delivered the result the car was keen to secure given its pace all weekend long.

A win for Haas F2 and Kevin Magnussen for reading the tea leaves correctly and starting from the pit lane on dry tires. The team strategy managed to secure 9th place and crucial points holding off Carlos Sainz in the process.

A fail for Valtteri Bottas and his jump start. As the championship leader, these kinds of mistakes cannot happen in a normal season let alone a compressed and shortened season. Bottas needed to take the fight to Lewis and the balked launch cost him the opportunity. Finishing second to Lewis ins’t going to do it and finishing third is right out. He lost the lead int eh championship and it will be interesting to see if he can ever get it back in 2020.

A fail for Ferrari who could only manage 6th and 11th for Vettel and Leclerc respectively. This is not a sign that the heavily revamped car solved their issues and suggests that whatever engine tricks they used in 2019 were a veneer and it adds even more complexity for 2021 in that this is the car they will race. They have a tremendous amount of work to do.

A fail for Romain Grosjean who, like Magnussen, started from pit lane on dry-weather tires but slipped backwards and out of the points. It was also a fail for Lando Norris, Esteban Ocon and Sergio Perez who all finished well off the pace fo their teammates.

I understand that Ferrari made changes to their engines from 2019 in a sealed investigation with the FIA but I am equally intrigued by the amount of smoke that comes out of the Mercedes engines when entering corners. Racing Point, Williams and Mercedes have all had this smoke coming out in decent amounts and I am intrigued as to why this happens.

A WTH for Nico Rosberg who managed to get his mug on the giant fan screen during the race. It’s a fan screen, not retired driver screen, Nico. Sure, he’s a fan, I get it, but surely the average person at home would take some precedent over a former driver?

Renault lodged another protest of the results for the Hungarian GP over Racing Point’s brake ducts. Why did they do that again, you might ask? They will continue to do that for every race until a verdict is issued by the FIA. A sort of formality in case they are found guilty and then every race protest will be executed upon.

Two lingering issues, at the time of this writing, is the FIA discussion about Red Bull drying Alex Albon’s grid slot with leaf blowers and Haas F1’s start procedure that may have breached the rules. Stay tuned.

Both Haas drivers were assessed 10s time penalties leaving Magnussen in 10th instead of 9th.

Rain before the start of the race influenced all the strategies today, with the grand prix getting underway on a damp track. Everyone went to the grid on the Cinturato green intermediate tyre, apart from the Haas of Kevin Magnussen on the blue full wets.

At the end of the formation lap, both Haas cars went to the pits for P Zero Yellow medium slick tyres. Their early switch meant that both Haas cars were running in third and fourth places throughout the opening stages of the race, after all the other drivers changed to slicks on a rapidly-drying track.There were four different strategies in the top five places. Hamilton was the last of the frontrunners to stop, making a third and final pit stop for P Zero Red soft tyres, to chase the point for fastest lap. His team mate Valtteri Bottas, who finished on the podium, also made a third stop to try and get past Max Verstappen. The Red Bull driver was second with just two stops: despite crashing en route to the grid.
As the race started with wet-weather tyres, the rules no longer obliged drivers to run two different types of slick tyres during the grand prix. 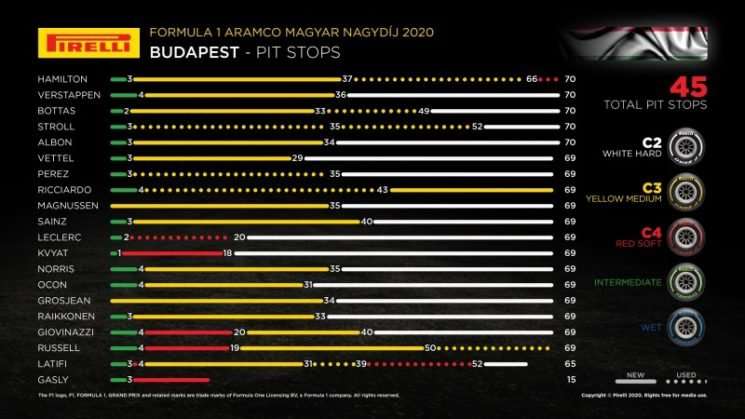 I feel I’m missing a piece to the Haas puzzle. During the race, drivers are told to ‘Box Box’ all the time, but doing so in the formation lap suddenly becomes aiding the driver? Regardless, that move to pit was inspired. I’m sure they’d trade that penalty for a championship point any day.

Also, happy to say this is the first race my son (9) watched it with me from start to finish :) Good stuff.

And here’s a counter argument.When Max hit the wall, he said, “I’m bringing it into the pits”. The team then said, “Go to the grid Max, go to the grid,” which is what Max did. So should this not as well be in violation of the same rule? I call shenanigans!

The rule was introduced specifically for the warm up lap only. Max’s incident was prior to this, so is not subject to the same restrictions.

Ah, thanks for that clarification.

We watched the Hungarian GP then the IMSA race at Sebring. It occurred that F1 is a lot like IMSA in that there were four race classifications on the track at one time:

This much spread in the race, where passing is all mid-field or controlled by blue flags, can not be good for long term viewership. Hopefully, the new spending rules will equalize the racing without penalizing good teams and drivers. Hopefully.

Oh, and one comment to Formula 1: Get rid of that stupid digitally overlayed Fan Wall! “Fan reaction: Pumping fists up and down”. Wow! Thanks guys! I didn’t know how to react! Now instead of cheering, I just pump my fists up and down like doing air push ups. Dorks.

Previous articleTPF Skid Marks- Time Flies!
Next articleTPF F1 Podcast #691 Hungarian GP review
I always like changing conditions in races because it stresses the strategies. When you add a constant threat of rain, it gets even more stressed and that makes it fun to watch. Especially when the gigantic image of Nico Rosberg hovers over the circuit.Negative CamberRace Report: Hamilton takes win and title lead at Hungarian Grand Prix