Delivering Mercedes a pole position, Valtteri Bottas was setting the table for Mercedes to achieve their record-breaking 7th consecutive world championship. That’s exactly what the Imola circuit delivered but it was some very crafty race strategy that saw Lewis Hamilton secure the win while Bottas nursed a damaged car home in 2nd place ahead of Daniel Ricciardo’s Renault.

A big win for Mercedes who have strung together a record-breaking seven world championships. The domination since the hybrid era has been the era of Mercedes and Lewis Hamilton has delivered their title in style with a fantastic drive and race strategy that saw him take his 93rd victory. He had to work for it and the laps he put in ahead of his stop were superlative.

A win for Daniel Ricciardo who managed his second podium of the season and thanks to a late pit stop gamble by Racing Point that dropped Sergio Perez off the podium, Dan gave Renault the lead in the constructor’s title battle in third place ahead of Racing Point and McLaren.

A big win for Daniil Kvyat who picked up the baton from a retired Pierre Gasly and marched forward to 4th place giving Alpha Tauri a big haul of points and suggested that he can deliver and should be considered for 2021 at the team. A great race for the Russian and a terrific result.

A fail for Red Bull racing who suffered a DNF with Max Verstappen who was putting on a terrific performance running in second place. An immediate puncture of his right rear tire left him out of the race and it’s a shame as he was putting a lot of pressure on a limping Bottas. Alex Albon struggled in qualifying and couldn’t pick up the pieces of the race for the team when Max retired. He finished down in 15th.

A fail for Racing Point with Lance Stroll struggling down in 13th after hitting one of his mechanics. The team took a gamble during the safety car period boxing Sergio Perez who was running in third. As it turns out, they ceded track position to Ricciardo and Charles Leclerc who did not box. Perez said it didn’t make sense but to be fair, if they had not boxed, there is every chance Ricciardo or Leclerc may have. A gamble that didn’t work and this left them out of third place in the constructor’s championship on even par with McLaren at 134 points to Renault’s 135.

A fail for McLaren who lacked the pace to make a run at Renault and Racing Point for constructor’s points even though Carlos Sainz looked race all day. They were both in the points but behind the Racing Point and Renault.

A big fail for George Russell who threw away a points-scoring opportunity for Williams by crashing while trying to warm his tires behind the safety car. An embarrassing moment that saw the driver sat at the side of the track in a very Mika Hakkinen moment.

Not sure what was happening with Kevin Magnussen but a severe headache caused him to retire and that’s not good at all.

Not sure what caused Pierre Gasly’s issue with the engine but a real shame as he was certainly headed for a podium finish given his pace.

A shame about the debris given that Max and Valtteri both were victims of it and I didn’t see the actual debris they hit on track or at least the replays didn’t show it. Was hoping the TV production crew would have shown those moments.

I like Kimi Raikkonen as much as the next person but not sure why he was voted driver of the day. Surely Ricciardo, Lewis, Kvyat, deserved the nod? 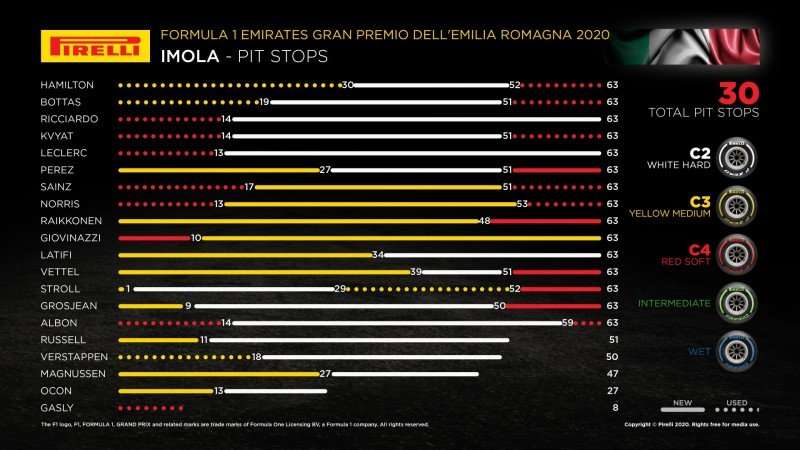 It was nice to race at Imola but nothing has changed there. It’s still a hard track to pass even with DRS. I thought the two day race weekend worked(sort of) because it gave less education/testing time for the teams. If there’s a takeaway from this weekend worth consideration, Pirelli should be giving the teams its hardest tires ALL THE TIME. It could add an air of uncertainty and difficulty for the drivers.

Out of all the crazy 2020 venues, I can say that this is one track that I won’t miss next year. It’s not Paul Ricard, but not one that I’d want to see back on the regular calendar.

Why Kimi? Because for 2 races in a row he PASSES cars without the ever-so-stupid-cheating-DRS. He’s a racer and I, as a F1 fan, want to see driving, racing, skills and less of the “push button to pass” of Scalextrix.

I am a big fan for sure and you’re right, it was a good result. As I look t the the race, I think Lewis is my guy for drive of the race because coupled with the team strategy and his ability to execute that strategy was terrific.