The Russian Grand Prix weekend was a bit of a rainy affair but the race was set for a cloudy but dry run…until lap 47 when it raised its slippery head and completely changed the complexion of the race. Lando Norris had briefly lost the lead but reclaimed it and was holding Lewis Hamilton’s Mercedes off in the waning laps. Lando had his first F1 race win calling to him while Lewis had his 100th race win calling to him. In the end, Mercedes and Lewis made the veteran move by boxing for inters while Lando stayed out and that was the move of the race.

Lewis Hamilton took his 100th race win and with the victory, he takes the championship points lead but Max Verstappen managed to get his Red Bull from last up to second place with a perfectly timed stop for inters and this allowed him to limit the damage by finishing second just ahead of Carlos Sainz’s Ferrari.

A big win for Lewis and Mercedes for a veteran call for inters and securing his elusive 100th race win! Lewis had a difficult weekend leading up to the race but during the grand prix, he kept his head, knew what was at risk and patiently waited for the win to come to him. A good call for inters for Valtteri Bottas as well to get him from the back to 5th and critical constructor’s championship points against Red Bull.

A win for Red Bull and Max Verstappen who started at the back due to an engine change and managed to make the perfectly timed call for inters to get him ahead of Sainz and Alonso to take second place minimizing the points loss.

You could argue that McLaren failed with Lando Norris staying out and losing the lead when the rain came but with Daniel Ricciardo in 4th and Lando in 7th, they did try to minimize the points loss to Ferrari with Sainz in 3rd. After a one, two in Italy, 4th and 7th is not optimum but it could have been worse.

A win for Ferrari and Carlos Sainz who finished on the podium giving the team a points boost they need in their battle with McLaren for the Constructor’s Championship.

A win for Alpine and Fernando Alonso finishing 6th and if you’ve kept your eye on this team and Alonso, you can see small improvements and pace improvement. The signs are moving in the right direction and keep in mind, this team knows how to win titles so it was great to see Alonso so high up in the order. I did like his cheeky move of testing out the runoff area and bollards in turn 2 on the formation lap only to use that on the first lap. A wily old Fox, that Fernando.

A win for Alfa Romeo and Kimi Raikkonen who finished 8th and given their recent squatter’s tent they’ve set up at the back of the grid for the last few races, this was a marvelous result from the Iceman.

It wasn’t the position George Russel would have wanted having started third on the grid but claiming 10th and a point for the team is a good result as his starting position wasn’t tenable during the race.

A fail for Lando Norris and McLaren who had the race in hand but as light rain began to fall, it was only in turns 5 and 7 so Lando felt he could hang on with slick tires for another 3 or 4 laps to take a win even when the team asked him to box. This is a perfect example of a young driver feeling the current grip levels but not knowing what is coming and the team weren’t stern enough with their command to box as they knew it was going to get much worse. Mercedes made that strict command and Lewis, being a veteran, trusted the team. You could forgive Lando though for his exuberance and not wanting to give up his first possible win but had he listened, he may very well finished second for big points ahead of Ferrari.

A fail for Sergio Perez and I can’t be quite sure if it was just the race strategy that left him down in 9th or if it was a slow or stacked stop for inters but Sergio had a couple of opportunities to play a major role in the undercut or other tactical moves that the team chose not to engage. As they have more data than I do, perhaps the gaps just weren’t there to use Sergio for a podium finish.

A fail for Charles Leclerc, who tried, like Lando, to stay out but lost too many spots and drifted down to 15th and that’s a shame because he was in the mix in the top 10 and gunning for a battle with Daniel Ricciardo.

Not sure what got in to Lance Stroll as he is usually a very good wet weather driver but when the rain came, he clouted his own teammate, Sebastian Vettel, forcing the German into the wall and then hit Pierre Gasly and still finished ahead of both of them. Very poor showing for such a “Prestigious” driver.

I’ll have to go back and watch to see what happened to Esteban Ocon and Antonio Giovinazzi to understand why they finished so far down the order given their teammates were both in the points. 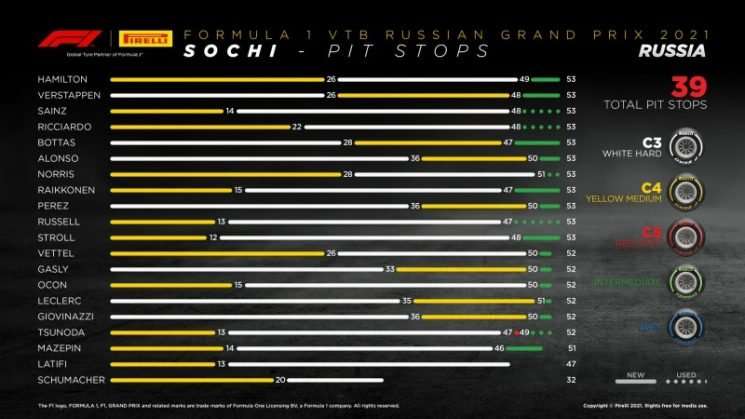