There were earmarks of a slightly better pace for Mercedes during the lead up to the Portuguese Grand Prix and that proved to be correct. Valtteri Bottas claimed pole and Lewis started second which was the team’s 71st front row lockout since 2014.

In the end, Valtteri Bottas couldn’t convert his pole to victory as that was taken by his teammate, Lewis Hamilton followed by Max Verstappen leaving Bottas in third. If Valtteri wanted to add his name to the championship bid, he dropped the ball this weekend.

A big win for Lewis Hamilton who got balked by his teammate at the restart after and early safety car and that left him vulnerable to Verstappen’s pass. Relished to third, Lewis kept his head down and used the better pace of the Mercedes to get back past Max and Valterri to take the win.

I have mixed feelings as to if this was a win for Max Verstappen as securing second over Bottas is certainly in the win column. While I don’t think he had the quickest car this weekend, the margins were very slim so his slight mistakes during qualifying and then the racing line for fastest lap that was deleted are the very things you can’t do if you want to beat Hamilton. On the other hand, I do think it was a win for Max because he was pushing very hard in a car that was just slightly off Merc’s pace and that can sometimes lead to small mistakes.

A win for Lando Norris who continues to hover in the best-of-the-rest lead and is squarely quicker than his veteran teammate, Daniel Ricciardo. Lando has really turned his season on and is putting in terrific runs over the last three races.

A win for Apline’s Esteban Ocon and Fernando Alonso for a terrific 7th and 8th place finish. To be fair, it was Esteban who was leading the Alpine charge this entire weekend. Given where they started the season, this is a good improvement but it may simply be a track specific performance so time will tell if they’ve truly gotten on top of their pace deficit.

A win for Mick Schumacher who managed to beat someone other than his dodgy teammate.

A fail for Valtteri Bottas who managed to lose the lead and sink to third. I am sure there are very legitimate reasons for doing so but at this level and at this team, that’s not a good thing. Like Max, if you want to beat Lewis, you have to be perfect. Even when Lewis stumbles, he recovers so you have to have your game straight and Valtteri didn’t on Sunday.

A fail for Sergio Perez and while 4th is not bad, he lost a lot of ground to the leaders and wasn’t a factor in the critical part of the race. Sergio just isn’t completely hooked up in that car yet and the lack of pace compared to the top three was evidence of that but strategy played its role as well.

I am not sure why Ferrari didn’t switch Carlos Sainz to Hard compounds but perhaps they didn’t like their pace on the Hards and felt they wouldn’t not work as well as they did for the leaders. This left Carlos a sitting duck and out of the points while his teammate, Charles Leclerc finished 6th.

I am curious as to why Kimi Raikkonen hit his teammate Antonio Giovinazzi in the opening laps. It ended Kimi’s race and it looked a bit of a junior league incident. I’ll have to wait for the team’s post-race comments to understand what happened there.

If the track favored Alpine, then perhaps it hampered Alpha Tauri? Yuki Tsunoda languished in 15th and it took Pierre Gasly everything he had to finish 10th. Just a few weeks ago, this team was tipped to be in the fight for best-of-the-rest so let’s hope this was a one-off, track impacted race for them.

An interesting race but I was struggling to get on top of the tire performance differences. During qualifying, Mercedes were faster of the Mediums but in the end it was the switch to hards that really benefitted them and to be honest I must have missed that revelation in Friday practice so that’s on me. Still, I think this track, temperature and tires suited Mercedes.

Has anyone checked in on Otmar over at Aston Martin? Rake Gate is probably putting him over the edge but at least there was a slight glowing ember in Sebastian Vettel’s performance this weekend. 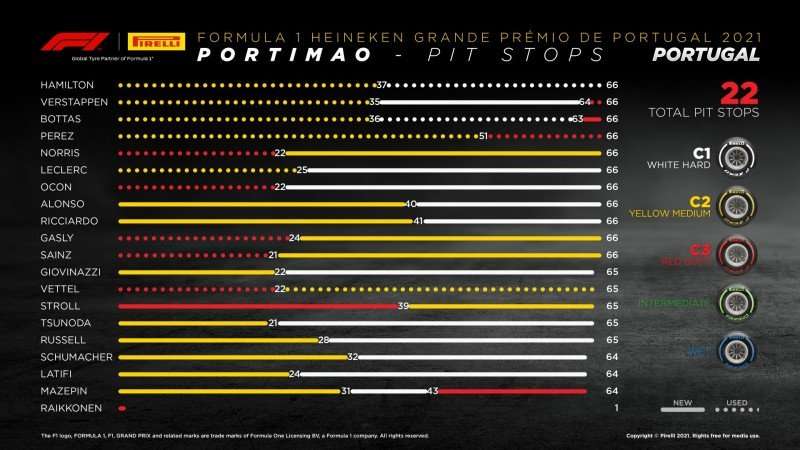 entertaining and encouraging race pretty much all round with the exception of Daniel Ricciardo who disappointingly still seems to be struggling with the McLaren.. ow and I really can’t see Bottas in a Mercedes again next year..

I think Bottas was a good choice when the Merc couldn’t help but finish near the top because he importantly does not upset fragile paranoid genius Lewis. but now the other cars have closed the gap he’s exposed as not good enough. All of his success came in Merc powered cars when that was a golden ticket. It’s still better than anything else, but not by enough to cover the gap in talent between the excellent drivers (Leclerc, Verstappen, Hamilton, Norris) and the good. I think Ricciardo has always been a little overrated, not that he’s bad by any means,… Read more »

Surely you know it was part of Hamilt0n’s contract to retain a 2nd best teammate?

I’m confident it was and I wouldn’t be surprised if he had a deal Geo Russell couldn’t win if he borrowed the car and Toto made good on it.

Fail: Lewis’ tires being completely done (again) on lap 20. Then continue on to do 17 more laps on them. Lewis is a great driver, but really man? This is as predictable as Bottas’ victory ‘To whome it may concern’ speech.

Also of note: Track Limits changed from one session to the next again. If only there were some way of denoting the limits throughout the entire track. Like a line or something. Ah well, a girl can wish, can’t she?

Was there a race again?… oh, wait, I see, Hamilton won again so I gues there was a race. After the last “psuedo-crashgate” Hamilton win (although he never did 63 laps, still he won somehow)… at least there was no cheating this time… oh, no, wait, “brilliant passing” with the DRS (never brilliant, it is trickery)… F1 is still pursuing the wrong path. Okay, I may be an old guy, but can anyone seriously say that F1 is a challenging or racey, or competitive between teams as it was in the ’60s and ’70s?

I join you in being very bored of seeing Lewis win and a bit suspicious of the marvelous environment for coincidence which seems to follow him round. Add to that I don’t really like him, and it’s hard for me to admit he deserves all those championships. But he does. Watching the way he attacks and passes, how he consolidates his luck, how he makes inters into slicks, how he slips the clutch in gravel! Compare that to Bottas total inability to advance in a race where Lewis passed from 9th to 2nd, or Verstappen’s inability to stalk without making… Read more »

I absolutely agree Hamilton is a great driver and champion. My feelings are not against Hamilton, but MB who seems to be always taking advantage.

How good was the win by Miller!

Previous articleBottas on pole for Portuguese GP
Next articlePortuguese GP review | The Parc Fermé F1 Podcast Ep 730
Race Report: Hamilton wins Portuguese GPUnfortunately I was hoping this would be a better battle and while it was there or thereabouts, it was mainly down to tire management and controlling the gaps. It started well with some challenges for the lead but then settled in for a rather pedestrian race.