The Eifel Grand Prix remained a cold affair with temperatures in the 9 degree centigrade or 48 degrees Fahrenheit but at least the fog and rain that canceled both practice sessions on Friday stayed away.

The canceled sessions meant that there was precious little data to develop the best race strategies for Sunday. The teams calculated their pace and tire wear on one session Saturday morning and that was about the same time that Racing Point called Nico Hulkenberg to hustle over from Cologne to sit in for an ill Lance Stroll.

It was great to see the Nurburgring again but it wasn’t a great weekend for a few teams who all suffered DNF’s and mechanical issues and chief among them was pole-sitter Valtteri Bottas.

In the end, it was a good weekend for Red Bulls’ Max Verstappen and a great weekend for Daniel Ricciardo but it was a record-breaking weekend for Lewis Hamilton.

A win for Lewis Hamilton who capitalized on an error from his teammate, Valtteri Bottas to take the lead and equal Michael Schumacher’s all-time win record at 91. Lewis drove a measured race with a competitive Max Verstappen behind him and while the Mercedes was quicker it was not the sheer domination they normally have.

A win for Mick Schumacher and the Schumacher family for giving Lewis a race helmet from the champion’s collection.

A win for Max Verstappen who found some competitive pace in Germany and made a race of it keeping the Mercedes duo honest and taking a well-deserved 2nd place.

A big win for Renault and Daniel Ricciardo who have methodically been improving race-on-race and while the Safety Car really benefitted Daniel, he was on the podium in 3rd on merit.

A win fo Sergio Perez who claimed 4th through his terrific tire management and the safety car may have denied him a podium finish. His teammate, Nico Hulkenberg, claims points in 8th having just sat in the car for qualifying. It goes a long way in the constructor points for Racing Point with Norris out and Carlos Sainz in P5.

A win for Alpha Tauri for points in the last eight races with Pierre Gasly in P6.

A fail for Lando Norris and McLaren for a DNF due to loss of power and Lando joined Alex Albon, Esteban Ocon and Valtteri Bottas for DNF’s. Bottas and Norris were on brand new engines this weekend.

A fail for Kimi Raikkonen who was starting his record-breaking 323rd race and did so by punting George Russell off the track in Turn1 and ended the British driver’s race. Kimi served a 5s penalty but struggled for the rest of the race toward the back of the pack.

Those alternate strategies for Sebastian Vettel, Daniil Kvyat and Kevin Magnussen didn’t work with their teammates well up the road. The hard tire gamble didn’t pay dividends for Kvyat and Vettel.

Not sure why they left the SC out so long waiting for lapped traffic to catch up to tail of leaders. Seems like they left it out a lap too long.

Concerning that Bottas had engine trouble as that was a new power unit for this weekend and one wonders if the lack of Friday running hurt even more to iron out any of the quirks with a new lump in the back. 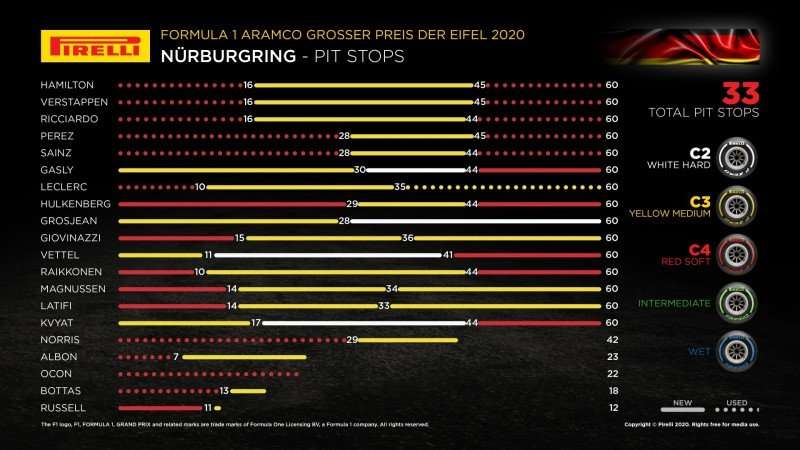 And a WTH for Albon, poor driving and then crying they raced him to hard. That will go down well with Dr. Marko﻿﻿

So Grosjean comes in 9th and no one cares. Maybe because it was just a matter of attrition. So a couple of points for not breaking down.

I think Raikkonen got a 10s penalty not 5, for whatever that’s worth. A fail for Vettel who once again just spun his car without being touched, and was seen battling Nicholas Latifi in the closing laps while the man he will replace was fighting for the last podium spot.