Every session of the FIA Formula 1 Russian Grand Prix weekend suggested that Ferrari were the team to beat and with pole position for Ferrari’s Charles Leclerc and his teammate in the tow-friendly 3rd position, it looked like Sunday may follow suit.

The start of the race was supporting this narrative as Vettel took advantage of the tow into turn 2 and secured the lead over Leclerc and from that point onward, Ferrari’s race began to unravel. Radio messages about team orders and pre-race agreements and an eventual MGU-K failure for Vettel prompted a Safety Car which handed Lewis Hamilton a free stop and the lead fo the race from which he never looked back. Normal service resumed with a Mercedes 1, 2 in Russia and a third place spot for Leclerc.

A big win for Mercedes who needed to positive energy and a win over Ferrari who have dominated in the last three races. Lewis was gifted the lead via a Virtual Safety Car session and there’s two sides of that coin. If the VSC is supposed to freeze the race, then pit stops during those sessions betray that notion. On the other side of that coin, you have to be in a position to capitalize and Lewis and worked to be in that position. It also suggested that Mercedes are still a team to beat in race-pace performance.

A win for Red Bull’s Max Verstappen and Alexander Albon who finished 4th and 5th respectively. Max didn’t have the shove in his Honda to take the battle to the leaders but his recovery drive was an inspired performance just as Albon’s was having started from 18th and provided the race with most of its best passing moves. 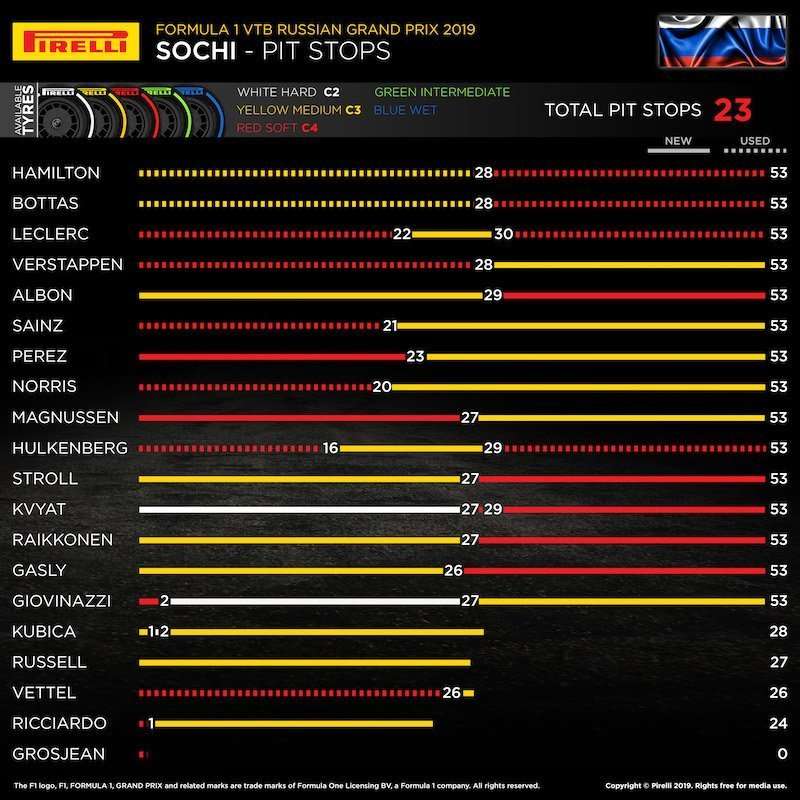 A win for McLaren and Carlos Sainz who finished 6th with his teammate, Lando Norris, in 8th. A dual points finish that helps the team put its foot on the neck of the “Best-of-the-Rest” position in the F1 Constructor’s Championship.

A win for Racing Point’s Sergio Perez who had a tough time in Singapore last weekend but put in a redemptive run to 7th with his teammate and team-owner’s son, Lance Stroll, languishing down in 11th. Still benefitted from the Safety Car but Sergio did not and his patience and fight when he needed it was a nice performance.

A fail for Ferrari who over-managed their strategy by creating friction at the start with team orders. It was a forgone conclusion that Sebastian Vettel would get a tow off of pole-sitter Charles Leclerc and take the lead and the pre-race deal was to revers the order if Leclerc allowed the tow and kept Hamilton behind him. What they didn’t plan was Vettel’s fantastic start and Leclerc’s help wasn’t needed because Vettel jumped Hamilton and Leclerc and was in a race of his own pulling 3-4 seconds over the field.

In a concerted effort to manage their drivers, the team left Vettel out too long so Leclerc could make the undercut work and move Vettel behind Charles. In the end, it was all for naught as Vettel’s MGU-K failed prompting the German to park his car on track prompting the VSC and eventual Safety Car that cost Ferrari the race as it handed the lead to Hamilton.

A fail for Alfa Romeo’s Kimi Raikkonen and Antonio Giovinazzi who finished 13th and 15th respectively. Kimi’s false start prompted a drive-through penalty which sent him to the back and Antonio’s wheel-banging at the start with Grosjean and Daniel Ricciardo spoiled his race leaving him last of the classified drivers.

It was a racing incident but somehow Romain Grosjean seems to always find himself pinched, poked, prodded, pushing, punting and banging in the midfield. Anything can happen in F1 but on the balance of things, Romain just seems to be the least common denominator of many of the clashes in F1 and that’s very expensive for Haas F1 and the reason I’m not quite sure why they extended his contract.

Not sure what’s going on with Daniel Ricciardo but his frustration with running midfield or worse seems to be forcing him into aggressive situations with drivers he knows he should avoid. His race was ruined by banging wheels with Giovinazzi and Grosjean.

A WTH for the FIA guy who tried to interrupt a live Sky Sports F1 broadcast and grab Jenson Button for a meet-and-greet with presumably some Russian Oligarch and his wife. How weird was that in the pre-race show? Good of Simon to grab the can of Oligarch spray and ward them off.

In the end, I didn’t have an issue with Monza nor did I see a problem with Singapore and to be consistent, I didn’t see an issue with Vettel’s race lead in Russia. The agreement may have been to give Sebastian a tow but in reality, Seb didn’t need it as he had a better start than both Lewis and Charles and Ferrari should have the data to confirm that and being true, should have let the race unfold as is and not over-thought the situation and then scuttled Vettel’s race for an undercut to force the swap.

Ferrari has got its Multi-21 incident. I’m sure Mark Webber was laughing and telling everyone “I told you so!”. In defense of Romain, it wasn’t his fault this time. One more thumbs-up: we have seen the last of the Sochii Autodrom.

I’ve been watching F1 long enough not to have an issue with team orders, however, keep it internal, don’t air your dirty laundry.

Also, I’m still not convinced about Albon, due to the disparity in performance, surely the bare minimum in an RBR is to finish 6th.

Previous articleLeclerc take pole ahead of Hamilton for Russian Grand Prix
Next articleTPF F1 Podcast #649 Russian GP review
A decent race that was robbed of becoming a very good race with a Ferrari DNF for Vettel and a VSC period that neutered the race of a good Hamilton/Leclerc battle. Negative CamberRace Report: Hamilton wins Russian Grand Prix as Ferrari falter