While Saturday was a wet affair at the second race in a season-opening double-header at the Red Bull Ring in Austria, Sunday was dry, sunny and very similar to last weekend’s race. With the condition similarities and less mechanical attrition, there were more comparisons and a better reflection of what we might expect for the balance of this truncated 2020 season.

Lewis Hamilton took the win from pole position at the Styrian Grand Prix followed by his teammate, and last week’s Austrian GP winner, Valtteri Bottas who managed to take 2nd from a struggling Max Verstappen who settled for third.

While it was a rather pedestrian race with Mercedes at the front, the real excitement was in the midfield with a terrific battle between Racing Point, Renault, and McLaren. A last lap battle left three cars crossing the finish line within fractions of a second from each other.

A win for Mercedes who seemed to cure their gearbox issue while riding curbs. Lewis looked planted and in complete control with a lot of pace in hand while Valtteri’s Mercedes reeled in the Red Bull of Max Verstappen with alacrity.

Despite front wing damage and a car that lacks pace compared to Mercedes, managing to secure a podium is a win for Max Verstappen but his frustration was tangible with his cars lack of power and pace.

Admittedly, Racing Point’s Sergio Perez did have a bit of a clash late in the race and caused front wing damage which lost him a place on the last lap but getting past a struggling Alex Albon in his Red Bull was a chance the Mexican had to take. While he was passed by McLaren’s Lando Norris at the final turn, Perez managed to put in a terrific day starting from 17th and taking the fight all the way to battle for 4th. A great day and his teammate, Lance Stroll managed to secure 5th giving the team a dual-points finish and suggesting that this team is a serious contender for best-of-the-rest.

A win for McLaren’s Lando Norris who had a 3-place grid penalty but managed to get back up to 4th and this keeps the team ahead of Racing Point as the current best-of-the-rest for 2020 so far.

Perhaps it isn’t a win but an honorable mention to Daniel Ricciardo who suffered a DNF last week but finished 8th on Sunday. The team should be fighting for best-of-the-rest but perhaps Dan would have fared better had the team given orders earlier to his teammate, Esteban Ocon, to let Dan pass as he was being held up and was on a different strategy.

There is no doubt that the Ferrari team had a bad weekend and Charles Leclerc’s attempted pass of his teammate, Sebastian Vettel, at turn three was a ham-fisted move that ended both their races and it ended the team’s ability to thoroughly test their new upgrades this weekend. Leclerc offered mea culpa and admitted that he was to blame for the carnage delivered to Ferrari’s front door this weekend.

A fail for Renault who retired Esteban Ocon but not after he managed to hold up Ricciardo. The team suffered a DNF last weekend and another this weekend isn’t helping matters.

A tough fail for George Russell who was running within striking range of a point but then ran wide dropping him to the back of the grid where he managed to best his teammate for in 16th place.

A fail for Alex Albon who was markedly off the pace of his teammate, Verstappen, and he struggled all weekend with a car that was not behaving they way he wanted it to is mid-corner speeds. Alex secured 4th but was 44 seconds of the race leader and found himself squarely in the crosshairs of the Racing Point car of Sergio Perez.

I am not quite sure what happened to Alpha Tauri’s Pierre Gasly as he was running well all weekend but he did get hit by Ricciardo early on and at the time of this writing, I am not sure if he suffered any damage that may have compromised his pace compared to his teammate, Daniil Kvyat, who secured the final point in 10th. Gasly was running well into the midfield but then dropped back to 15th with three stops.

The temperatures were cooler this weekend than last but according to Sky Sports F1 commentary, Haas F1 were struggling with brake cooling just as they were last weekend. This is an overreaction but Haas F1 seem to have been struggling with brakes in general for a few seasons now and I am not sure why that is an enigmatic areas for the team to get on top of. If it were easy, everyone would be doing it but then many of the teams seem to be on top of their braking needs so I am not sure where the issue for Haas really is. 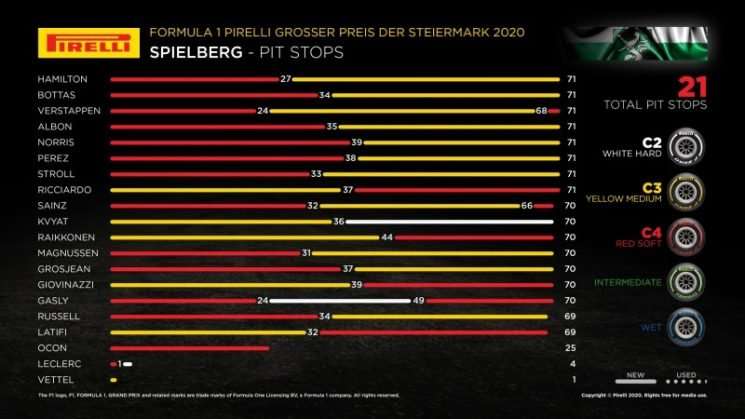 My nomination for drive of the race goes to the RC platform driver who missed the podium by more than an arm’s length. It is only at this level of racing that one observes such skill. Clearly, an employee of the highly successful F1 TV venture.

If Alex wants to keep his seat for next year, he’s going to need to do better than that. There’s a very handy driver on the market that probably wouldn’t mind restarting some old friendships at RBR.

Agree with faulting LeClerc for the crash – his fault. But watching the replay and how much room was on Vettel’s left, they could have made it through. Doesn’t change whose fault it is, but just another example of Vettel’s fall. He’s just not aware of what’s happening around him anymore.

Re – Racing Point – best of the rest, but we better watch out Ferrari’s not part of the rest. Not unimaginable RP ends up in 3rd at this rate!