The Australian Grand Prix has been a staple of the Formula 1 calendar for years and having not been ran for the last two years, it was great to finally be back to the Great Southern Land and the Australian fans clearly were ready to get out to a race and bring the energy only they can.

From Friday onward, Ferrari looked very competitive while Red Bull looked thereabouts on lap times but there were clearly issues with the car balance and niggles with the systems that eventually manifest in a DNF on Sunday for Max Verstappen. This left Charles Leclerc firmly in control of the race while leading Sergio Perez and George Russell home to the podium.

A big win for Ferrari who have shown, despite their continued porpoising issues, their car is planted and capable of running well at different kinds of circuits—in short, it is the car to beat in 2022. Charles converted a very nice pole position into a win by controlling the race, the pace and his tire wear for a big win down under.

You could certainly argue that Red Bull didn’t have a win weekend but Sergio Perez put in a very nice race having been caught out by the Safety Car and pit stops losing positions he had to reclaim to bring it home in second while his teammate, Max Verstappen, DNF’d.

A win for Mercedes who, admittedly assisted by Verstappen DNF, brought their cars home in 3rd and 4th. The track seemed to flatter the Mercedes power, as evidenced by the resurgence of McLaren as well, but that’s not to take anything away from Mercedes as a team with George Russell scoring a podium finish. Lewis was less pleased radioing that the team had put him in a difficult position.

A win for Lando Norris and Daniel Ricciardo who brought the McLaren’s home in 5th and 6th and that’s quite an improvement from the first race of the 2022 season. It seemed like a tale of two team on Saturday and you may have thought that McLaren had the upper hand over Mercedes but in the end, they trailed their engine maker home but still a terrific recovery and result.

A win for Valtteri Bottas who was dropped down the order as both he and Pierre Gasly managed to clamor their way back into the points. Esteban Ocon also scored points for Alpine.

A big win for Williams and Alex Albon who ran very long on his hard tires to the last lap but boxed for new shoes and put in a terrific in and out lap to secure a point for the team. It was a good strategy call and a good drive from Albon.

A big fail for Red Bull who had another fuel issue that stopped Max Verstappen. Defending his championship is going to be difficult if the team do not get on top of not only their pace deficit to Ferrari but their reliability issues with Max’s car. Max took it on the chin but he realizes that Ferrari aren’t showing DNF-producing reliability issues and the championship will be hard to win with two DNF’s in three races.

A fail for Aston Martin the entire weekend. Sebastian’s crash on Saturday, Lance’s crash and then another crash from Seb on Sunday has left many scratching their heads as to if this weekend could have gotten any worse.

A big fail for Carlos Sainz who got hobbled by the safety car during qualifying leaving him to start 9th but he had a bad start and then spun the car into the gravel and out of the race. If he was feeling pressure against his teammate to perform, he now may find himself in a wingman role if he can’t start winning races. Ferrari aren’t shy about “holding station” and it was my concern for Carlos when he joined Ferrari.

I’m not quite sure what happened to Fernando Alonso’s weekend. He was putting in a fantastic qualifying run only to have the gearbox freak out and put him in the wall. Then on Sunday he looked competitive but got hung out by the safety car and then with new medium shoes, he dropped backwards with, presumably, bad graining. A shame because he should have been well into the points.

I understand the CV19 positive issue for Vettel kept him out for two races but Sebastian Vettel looked very ragged all weekend. I’m starting to wonder if Helmet Marko was right about Seb’s motivation these days.

I think it is a WTH for Nichola Latifi and Yuki Tsunoda who both had teammates well up the road.

Not sure what the overall strategy was for Kevin Magnussen was but I think he swapped places with his teammate, Mick Schumacher, and both Haas F1 cars looked well off the pace from their previous two races. They were both caught out by the Safety Car. 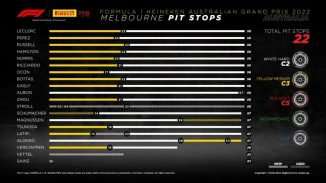 I would give a FAIL to the new track changes. While it made the racing faster, it did not nothing to make it better. Even without the added(later dropped) DRS zone, the race was much like past years: a processional affair.

Hmmm. I thought there were some good passing moves midfield (DRS fueled) but up front it was straightforward for sure. That’s because Ferrari were quite dominant. I’m intrigued about track surface and tire windows now. I had thought that may not be quite as pronounced after the first two race but it was here for sure.

Certainly fun to be there, great atmosphere.

Leclerc is currently leading the WCC!

Ferrari confirming their ‘baked in’ advantage for the next four years.

Regarding Vettel: I recall that Hamilton had a similar issue when he got COVID last year. In some of those races, even if he did win, he was looking like he had the wind knocked out of him when he took the podium. That COVID will affect your endurance because it affects your breathing. It takes a while to recover, so it’s not that unusual to see Vettel in this depressed state.

No, I don't believe he's been overrated. He's more than…

Hi Todd, Paul and Grace, I enjoy listening to your…

I think Ricciardo has always been overrated. It's all based…

Hi Todd, Paul and Grace, I have a question about…

Previous articleLeclerc takes pole in Australia
Next articleAustralian GP Review | The Parc Fermé F1 Podcast Ep 778
A good race and great to see Australia back on the calendar! The fans were terrific to see and the race was a good race to watch. Lots of midfield battles and improved TV production. Negative CamberRace Report: Leclerc dominates at Australia GP