The Russian Grand Prix in Sochi became the location in which Mercedes AMG Petronas delivered their first Constructor’s Championship. The Mercedes duo of Lewis Hamilton and Nico Rosberg finished 1, 2 respectively and clinched the title for a team that truly began its march to success under the purview of Ross Brawn who Mercedes non-executive chairman, Nikki Lauda, says deserves some of the credit for their achievement:

“Very much so, he was part of the team for many years and he made the start of it and now Paddy has finished it,” 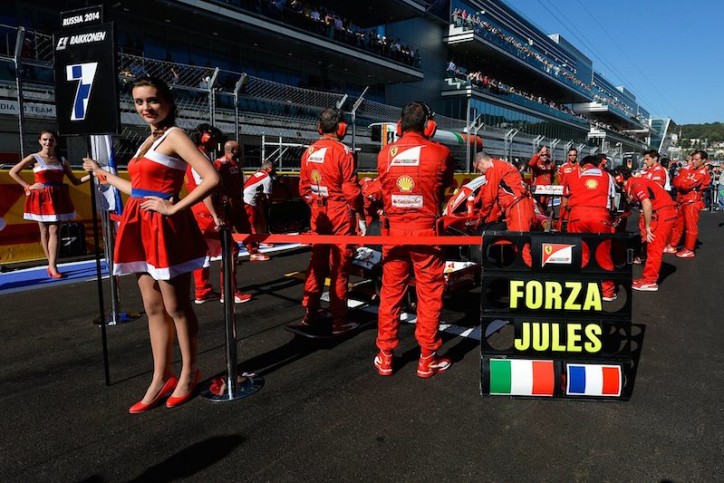 The Sochi circuit proved to be elusive where grip was concerned much like the Austin circuit was two years ago when it made its first appearance on the Formula 1 calendar. Pirelli brought a medium and hard compound tire to the race and they proved to be a conservative choice given the track’s sympathy on tire wear.

Lewis Hamilton drove a magnificent race managing not only his tires but what would become the bigger element during the race for many teams—fuel consumption.

Teammate Nico Rosberg made a move for the lead on the first lp but over-cooked the entry to turn two and flat-spotted his front tires demanding a pit stop for a set of Prime tires and proceeded to race 52 laps on one set of tires to minimize the points damage of a Hamilton Victory.

Lewis’s terrific drive gives him a 17 point advantage over Rosberg as they head to the USGP in Austin. The race was run under the weight of a struggling Jules Bianchi who suffered severe head injury during last week’s Japanese Grand Prix and Hamilton dedicated his win the stricken Frenchman:

“It would be great to dedicate it to him and his family,” Hamilton said.

“It would make a very small difference to them, but every bit of positive energy hopefully will help. We all need to be sending positive vibes that way.”

With Rosberg’s mistake, it looked early on as if McLaren’s Jenson Button or Williams F1’s Valtteri Bottas might claim the second podium spot but neither driver had the pace to hold off Rosberg and finished 4th and 3rd respectively. Nevertheless, it was a great drive from both and the Williams F1 point haul needed to keep the team ahead of Ferrari in the constructor’s championship.

The first win for me was the support throughout the weekend for Jules Bianchi. The drivers all encircled at the front of the grid in a show of support for the young Frenchman and the messages of hope and support were clearly evident with Lewis Hamilton dedicating the win to Jules.

Claiming victory at the inaugural Russian Grand Prix is a big win for Lewis Hamilton and a measured drive conserving the resources needed and he has now equaled Nigel Mansell’s British record of 31 grand prix victories. Lewis looked sublime in Russia and like Michael Schumacher, he seems able to really excel at brand new circuits when offered the challenge. The momentum is certainly with Lewis having won his 4th race in a row. 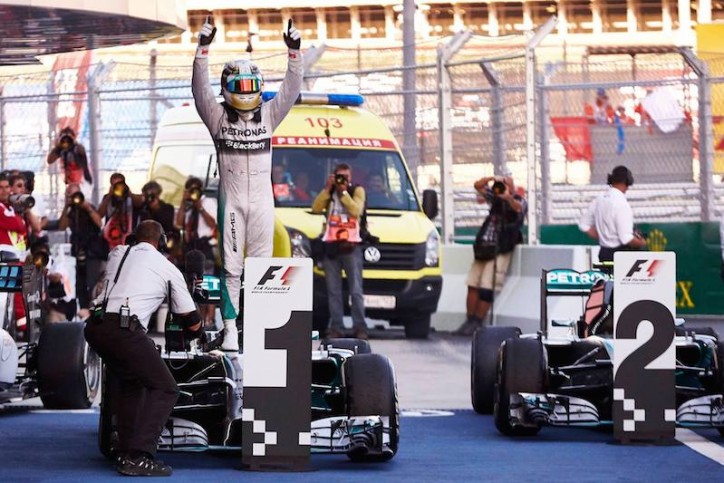 Another win has to be for Nico Rosberg who could be categorized in the fail column for his lockup on lap one but his recovery drive from last to second driving 52 laps on the same set of tires was a tactical and driving win. It was a recovery much needed if Rosberg has any hope of beating Lewis for the title. Nico’s strategy prompted a response from Button, when told, that it was way too early for that strategy and yet Mercedes and Nico made it work.

Valtteri Bottas secured another podium finish and that’s a win in my book. Jenson Button equaled his best finish this year in 4th place while his teammate, Kevin Magnussen, started 11th and finished 5th. A much-improved McLaren is a win.

It was a win for Russia despite the political narrative surrounding the event. The circuit looked in good shape and the facilities seemed top-shelf. The world feed couldn’t help but show Vladimir Putin, along with Bernie Ecclestone and Jean Todt, taking in the race from the posh seats as well as Vlad in the waiting room after the race and then handing out trophies at the podium celebration. At this point I am half expecting him to be at my house by 7pm tonight—the guy is everywhere. Who know, maybe we can get President Obama to Austin?

If I’m honest, the fuel restriction element in F1 created what became a fuel mileage race and I hate that. This circuit is long and even though it is s treet circuit, its unique character is that of a long, sweeping and fast street circuit which is kind of a nice change. However, the fuel limits prevent the cars from doing what they actually can do and while I may be a motorsport mook, I am trenchant in my view that this is an element we could do without.

While I praise Nico Rosberg for his recovery drive, the simple fact that he needed a recovery drive is a fail. Nico admitted that he had cooked the corner and it was his mistake and with so much on the line, he has to think big picture when fighting with Lewis, there is no room for mistakes.

Felipe Massa’s weekend was a fail as his fuel pressure issue in qualifying put him on the back foot and continues his season of bad luck. He attempted to make an aggressive two-stop strategy work but couldn’t pull off a point.

Ferrari and Red Bull equally share a fail and while they gained points, both teams seemed adrift of mounting any real challenge. The nature of the circuit exacerbated the short-comings of both chassis and really highlighted just how far the two teams have slumped in not only original chassis performance but even the in-season development war. I suspect this circuit has more to do with their lack of competitiveness than the actual cars themselves but we will see.

After qualifying so well, Daniil Kvyat was set to make a great showing in his home grand prix but both he and teammate, Jean-Eric Vergne, were unable to maintain the qualifying pace they had and drifted backwards although both drivers were seriously pushing to the point of running out of fuel. The team ran as high as fifth at one point but fell outside the points.

Caterham’s DNF for Kamui Kobayashi along with Marussia’s retirement of its single car signaled a brutal weekend. Kamui is starting to rue the decision to leave Ferrari’s sportscar program for this and it is a shame to see Marussia not finish the race in honor of Jules.

Another WTH moment is for Force India. The recent struggles have not dropped them behind McLaren in the constructor’s championship and Nico Hulkenberg seems to have steadily drifted backwards in the second half of the season.