The Hungarian Grand Prix was the unfortunate “next race” after the controversial British Grand Prix that saw Lewis Hamilton and Max Verstappen clash which ended Max’s race in dramatic and dangerous fashion. The fans were all alleging fault on the drivers with some accusing Mercedes and Hamilton as being desperate and inappropriate while others were accusing Red Bull and Christian Horner as being racist. The cesspool that is social media didn’t fail to produce what is worst in humanity and it was replete with posts, tweets and videos showing graphics, racing lines, modeling and myriad different contraptions to prove who as wrong.

The F1 media were complicit in trying to keep the tension between drivers and teams going with incessant questioning all weekend that finally took a toll on Max Verstappen who lashed out about the ridiculous questions. Hell, I had tuned out much earlier int eh week because we’d gone way beyond the saturation point last week.

On balance, Max wasn’t comfortable with his car for much of the weekend and Lewis seemed very planted with his Mercedes taking pole position and leaving Max to start third behind the other Mercedes driver, Valtteri Bottas. Regardless of what friction could be created in the media, Red Bull looked to be on the back foot starting Friday in FP1.

In the end, the hype created about Lewis and Max was a damp squib because it was Lewis’s teammate, Bottas, who dove into the first corner ruining Max’s race along with McLaren’s Lando Norris and Max’s teammate, Sergio Perez. It didn’t take long for hints and innuendos to surface about using Bottas to take out both Red Bull’s so Lewis could win. A ridiculous notion but even if it were true, Lewis didn’t win. That glory was reserved for Alpine’s Esteban Ocon followed by Aston Martin’s Sebastian Vettel with Lewis claiming third.

A huge win for Alpine and Esteban Ocon who took advantage of Bottas flying though the first corner like a pinball using Red Bull and McLaren’s as flippers. Ocon then avoided Lance Stroll who decided to take a very creative line over the curb and through the grass to systematically move Ferrari’s Charles Leclerc out of Ocon’s way. Esteban drove a flawless race and held Sebstian Vettel off the entire afternoon to bring a much-needed win for both himself and the team.

A huge win for Fernando Alonso who not only added to Alpine’s dual-points finish but made Ocon’s win possible as he was the ultimate tail-gunner keeping a charging Hamilton at bay for just enough laps to ensure that once the 7-time champ did get around him, there wouldn’t be enough laps left to chase down Vettel or Ocon. Not only is Fernando a 2-time champion but he’s one of the best wingmen in the business and reminded Lewis as to why he’s probably very lucky Alonso hasn’t had a competitive ride for much of Lewis’s career.

A big win for Aston Martin’s Sebastian Vettel who secured second place but oddly stopped on track after the flag due to fuel issues. Vettel took the same line through turn 1 as Ocon did and was running second all day. It’s why Aston Martin hired Seb. I was surprised the Sky F1 commentary said there was no issue with being out of fuel but that’s not what the regulations say, the rule is you have to have 1.0 liter of fuel left after a race for FIA testing. Vettel only had 0.3 liters and his podium was taken away from him and he was given a DSQ which really hurts but those are the rules and have been the rules for some time now. The team know this.

A win for Carlos Sainz to haul his Ferrari up to 4th and for Alpha Tauri who brought Pierre Gasly and his teammate, Yuki Tsunoda, home in 6th and 7th. When attrition hits during a race, you have to make the most of it and both Pierre and Yuki did so. Pierre even nabbed Fastest Lap of the race. You could also say that Mick Schumacher drove a good race too.

Alpine’s win feels nearly equal to the dual-points finish Williams had in Hungary. Nick Latifi drove a fantastic race to lead George Russell home in 8th and 9th respectively. The achievement left George in tears after the race such was the pressure and emotion he’s carried trying to give the team the points they need.

A huge fail for Valtteri Bottas who managed to ruin Max Verstappen, Sergio Perez, and Lando Norris’s races with his Mercedes ricochetting off the others like a blaster bolt in a trash compactor nearly killing Han, Leia and Luke. For that, he gets a 5-place grid penalty at the next race but that’s probably cold comfort for Max who lost the lead in the driver’s championship this weekend finishing only 10th with a car so damaged that it had less downforce than a Haas F1 car. The incident robbed fans and the media of the battle everyone was waiting for between Max and Lewis.

It would be hard to give Max, Sergio, Lando or Charles a “fail” of the race because none of that was their fault. You could even make an absolving case for Daniel Riccardo who got spun on the first lap due to Stroll’s whack-a-mole routine.

One could argue it was a fail for the Aston Martin team who know the rule on the 1.0 liter fuel regulation. Having said that, what are you going to do if you short-fueled Seb and ran rich to try to win? In the end, you stop the car as quick as you can and hope you have enough…they didn’t.

I am not quite sure what the deal is with Yuki but that guy is a piece of work. F bombing the team, telling them to get Pierre out of the way because he’s too slow. In short, he acts like a driver who feels entitled to be in that car. As if he has a benefactor(s) who are paying dearly for the opportunity. It comes across as the tail wagging the dog but maybe Yuki and his benefactor swing a very large stick inside that team. Regardless, most youngsters would be grateful for the opportunity and his reactions are starting to make the team look foolish.

For the briefest of moments, I had USGP 2005 flashbacks when Lewis gridded up as the only car on the grid. After the race, Lewis seems to suggest he told the team about the conditions being dry but he caught himself and bailed out of the explanation of what happened when Johnny Herbert asked. The reality is that there is no radio not he formation lap according to Sky F1 and Lewis stayed out with all the other drivers entering the pit lane.

To be fair, he was leading the field so he had less to gamble and it was a no win situation. Had be boxed, he’d have been at the back and he chose to stay out which put him in the back as well. Lewis had his own version of the Kobayashi Maru and he wasn’t quite as clever as Captain Kirk.

With all that attrition, how is it Alfa Romeo couldn’t make it to the points? The unsafe releases and errors were really unfortunate. 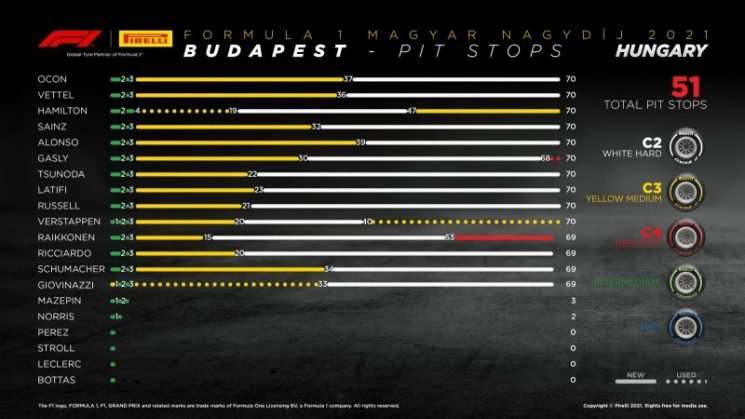 So Bottas brakes 50 meters later than everyone else on a wet track with cold tires, takes out half the field and clearly turns his wheel to the left, intentionally or not collecting Perez. Stroll is confronted with an interlocked wall of halted ruined cars, chooses the only possible escape route and isn’t able to control the car on the grass. These two acts result in the same penalty? wtf is going on with the stewards this year?

I think the penalty against Stroll was fair—everyone else on his side of the track brakes appropriately and he was already going in too hot when Bottas was colliding with Norris.

We need to be really careful here. I’m okay with saying Bottas is an idiot who messed up, but people suggesting it’s intentional is a bit much for me. I’ve done remarkably stupid things in FF1600 races and when it works I’m a hero and when it ends in tears I’m not…. I suppose what I’m saying is that the type of racing I do is 1/100th of F1, and it’s bloody intense. Weird things happen out there.

I think you’re right, that most likely it’s just a clumsy driver. But I’m also not a huge believer in coincidences. In the last two races, a lot of cars which weren’t Mercedes ended up ruined and Lewis went from nearly hopelessly back in the points to the lead. Over time, it often seems to go this way. When people threaten Lewis’s place they end up off the track, whether we’re talking about Ver, Albon, or his own teammate. And if suggesting a crash is intentional is too much for you, if you know you’re F1 you know it’s not… Read more »

Nice to see Haas in the points if only briefly with Mick doing some nice driving holding up Verstapen in his damaged car. It’s not much of win, but it’s all they got.