The entire weekend at the Azerbaijan Grand Prix was a chaotic and exciting weekend. Pole position for Ferrari’s Charles Leclerc, tire issues and brakes that were smoking at a restart.

In the end, both the championship leaders leave Baku with no points. Max Verstappen suffered a tire blowout with just three laps left gutting the team and prompting a red flag and standing restart. Lewis Hamilton’s brakes were smoking at the restart and he apparently left the “Brake Magic” setting on which saw him run off track at turn 1 and out of the points. Neither championship leader lost a point to the other so they leave in a neutral position.

It was the terrific run by Max’s teammate, Sergio Perez, who gave Red Bull the win followed by a terrific drive from Sebastian Vettel and equally magic drive by Pierre Gasly in third.

A big win for Red Bull who were gutted to see Max Verstappen out of the race through no fault of his own. He drove a great race but the reason they hired Sergio is to pick up the pieces if Max faltered and that is exactly what he did. No one can call it easy to fend off the attacks of a 7-time champion like Lewis Hamilton but Sergio did all day and it could signal that Sergio has come to grips with this Red Bull car. Also important that Max didn’t lose any point to Lewis due to the off that Hamilton had at the restart.

A win for Aston Martin and Sebastian Vettel for a very measured drive to second. Good to see Sebastian back and driving well all weekend. It’s the teams’s first podium as the Stroll-led Aston Martin team.

A big win for Alpha Tauri’s Pierre Gasly who drove a terrific race to finish on the podium. Even Yuki Tsunoda did a good job of getting his car up into 7th for good points after telling the team to shut up over the radio.

A big win for the Wiley veteran Fernando Alonso and Alpine. After suffering an early exit for Esteban Ocon, Fernando lurked around the back the top 10 all day and made the best of the restart to jump Tsunoda for 6th place.

It’s still a win for Ferrari’s Charles Leclerc who lost the lead but managed to come home in 4th ahead of McLaren, their main rivals, so mission winnow accomplished.

A fail for Mercedes who hung Valtteri Bottas out to dry on Saturday using him as a tow agent for Lewis Hamilton to get second on the grid compromising Valtteri’s qualifying efforts. Mired in the middle of the grid for most of the day, it made it hard for him to pick up the points if something should happen to Lewis, which it did. Lewis had left a brake and wheel heating setting on at the start and this caused him to run aide at turn one on the restart punting him out of the points in a very rare mistake from the champion. With Max out, there was no damage to his championship points deficit to Verstappen. Regardless, a 12th and 15th place is hard to take for a team like Mercedes.

A fail for Ferrari’s Carlos Sainz who could have maximized the constructor points damage to McLaren but he ran wide early on and spent the rest of the day. He did manage to get back ahead of Ricciardo’s McLaren so that was good but there is every chance he may have put both Ferrari’s ahead of Norris as well.

Not sure what happened with the Pirelli Hard tire compounds but Max Verstappen said that they would speak with the tire maker and those talks would beget an explanation that it was debris that caused the incident. Indeed, that’s exactly what Pirelli said in the press after the race. In fairness, they did say the track was dirty but the characteristics of the failures on Lance Stroll and Max Verstappen’s cars didn’t seem like a puncture but we will have to wait and see.

Not sure why Nikita Mazepin swerved at Mick Schumacher on the final lap as the German was passing him but that is very bad and doesn’t do much to endear him to the team or fans. 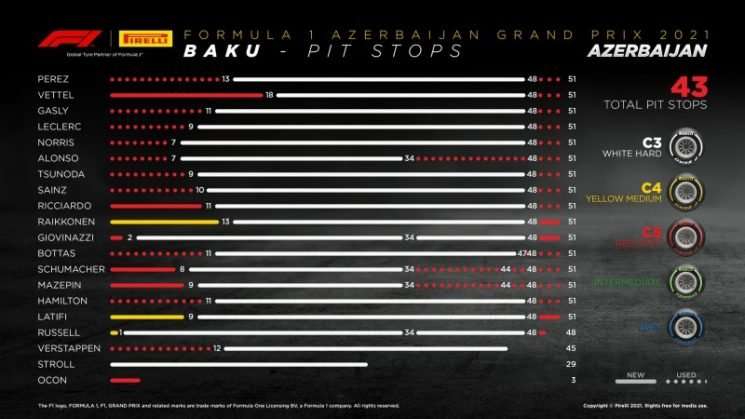 I’ve been the first to criticize Vettel but that was a nice drive and he seemed so much more likable the whole weekend, like something is right with him, and when he’s like that he does well and it’s nice to see. Good job Seb! Tsunoda, on the other hand, did ok this weekend on a tricky track but is impossible to like. What a jerk.

Well deserved victory for Checo but the main issue this weekend were the exploding tires. I think both Lance and Max were very lucky in the way they hit the barrier, a fully sideways hit or an angle in which the cars would ricochet would’ve been way more dangerous.

I knew Mick Schumacher would be amazing! Already finishing ahead of Lewis Hamilton!

Previous article
Leclerc takes pole at Azerbaijan GP
Next article
Azerbaijan GP Review | The Parc Fermé F1 Podcast Ep 735
Terrific race to watch. Great fun, lots of action and drama and keeps Baku as a fan favorite for overtaking and action. Thankfully no one was injured in the crashes but that needs a serious looking in to. Race Report: Perez wins in Azerbaijan