There are some who do not like the Monaco Grand Prix and the start of the 2022 race was a bit of a debacle with a start delay, formation laps behind the Safety Car and then a red flag. If you weren’t a huge fan of the Monaco GP, this wasn’t helping things.

However, the delay proved to be correct as the rain came down and when the resumed the race, the strategy battle began. It was that strategy in changing conditions that ultimately cost Charles Leclerc a potential win of his home grand prix.

Red Bull felt Ferrari looked like the team to beat but all weekend long, while Max Verstappen struggled to get on top of his car, teammate Sergio Perez looked on fire and so it proved with the Mexican taking his first win at Monaco ahead of Ferrari’s Carlos Sainz and Verstappen.

A big win for Sergio Perez and Red Bull. It doesn’t surprise me because Sergio’s first run in F1 in a Sauber at Monaco was a clear indication that this track is something special for him. Red Bull were on their back foot with Max all weekend and Ferrari looked daunting but Sergio had been on pace all weekend long and denying Ferrari the victory goes a long way inside Red Bull.

It wasn’t what Ferrari wanted, ultimately, but it’s hard not to consider Carlos Sainz’s 2nd place as anything but a win for a guy who has been struggling this season. He needed some success and he got it in Monaco.

A win for George Russell who dragged his rowdy Mercedes up to fifth again and he is clearly the driver hauling Mercedes toward the front of the constructor’s championship. There are many narratives to take away from Mercedes but ignoring the job George is doing in favor of explaining Lewis’s challenging situation does a disservice to Russell. He is doing a fantastic job!

A win for Lando Norris and McLaren and like George, Lando is pulling this team into the points and doing so under the weather.

Also a win for Fernando Alonso who took his Alpine up to 7th and did so by managing his tires, backing the entire midfield up and then turning it on late in the race for a nice points haul.

A big fail for Ferrari who single-handily tossed Charles Leclerc under the bus via a bad strategy call. Why they never allowed Charles to go for overtake, I’m not sure but if effectively stole the race win from Charles. Ferrari are going to have to get on top of their strategy if they want to run with Red Bull and Mercedes. The confusion and panic on their team radio is evident that they have to up their game.

A fail for Haas F1 who retired Kevin Magnussen with an engine issue and then brought out the red flag with a large crash by Mick Schumacher. Thankfully Mick was ok.

A fail for Daniel Ricciardo who finished down in 14th and still seems lost as to where his ultimate pace has gone. He’s a brilliant driver and that’s what makes this even more of a head scratching issue.

A WTH for the race stewards and director for the confusion in getting the race started. The dodgy TV coverage was a challenge to watch and several key moments were missed on track. It’s not easy to broadcast a race but perhaps Monaco should offer this portion of their demands back to F1 along with trackside hoardings.

I’m still stumped as to Ferrari’s strategy for Charles. Gutted for him.

Not sure why they didn’t do a standing re-start after the red flag. I understand the dry line versus damp line but that’s just part of racing. 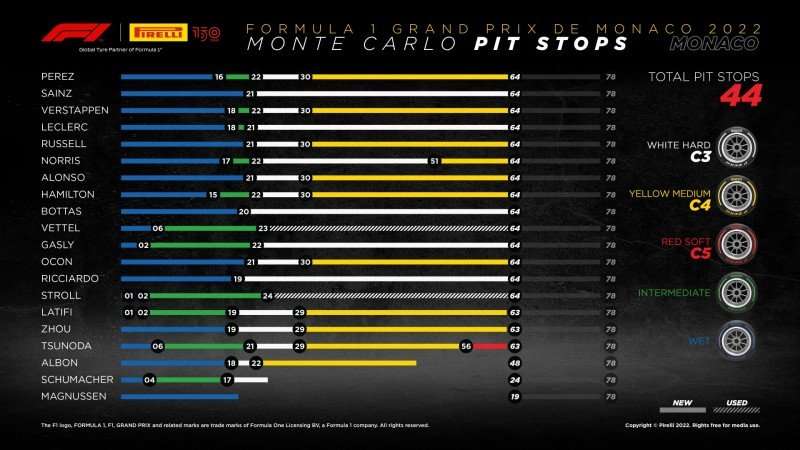 I want Masi back. Ferrari did what they always do they messed it up. After the weekend he had Max got away good. Can’t wait for Monaco to be dropped from the calendar.

Did you see that Ferrari submitted a protest for Max and Perez for going over the pit lane exit line?

Did anyone see that bird fly in front of Perez before the massive lockup (around lap 33)? I wonder if that’s what caused him to miss the braking point.

If I’m not mistaken, Monaco has their own TV Director when F1 races there. There were so many times that the commentators were talking about something exciting happening on track, but the broadcast completely missed it. Or they would say something like, “It’d be great to see a replay of that,” which was promptly ignored. ~X8

I totally saw that and thought something hit him or hit the car and that’s why he braked.

Previous article
Leclerc on pole for Monaco GP
Next article
Monaco GP Review | The Parc Fermé F1 Podcast Ep 785
I know, I know...it's a processional race but I love Monaco! Every race, despite lack of passing, is a different race with results that can confound even the best strategist. Race Report: Perez wins Monaco GP