The Singapore Grand Prix was a bit of a reflection of the qualifying session with torrential rain just before the race presenting the drivers with a drying track after an hour delay to the start.

As usual, an hour delay and a long, tough race meant it finished at the 2-hour limit with Sergio Perez scoring a victory in one of the best races of his F1 career. A brace of Ferrari’s followed him led by Charles Leclerc and Carlos Sainz respectively.

The humid weather at night with no breeze means a very slowly drying track and this meant there was no DRS until very late in the race when all the cars were switched to slick tires.

A big win for Sergio Perez who managed a good qualifying result to start in 2nd, got a better start than Leclerc and took the lead to victory. It is important for Red Bull when Max Verstappen is out contention and Sergio delivered in spades. Given he knew he may have a penalty, he pulled out a 7s lead as a buffer and it came in very handy as he was handed a 5s penalty.

A win for Charles Leclerc who needed to resuscitate his championship bid and finishing second is a good result with no strategy errors from the team, and in a race like this it’s always a possibility. Charles was followed by Carlos Sainz for a good Ferrari result.

A big win for McLaren as they move ahead of Alpine in the constructor’s championship for “best-of-the-rest” with a dual-points finish. Lando Norris had a great race finishing in 4th place while Daniel Ricciardo finished in 5th. Both took advantage of a late safety car and this moved them up the order plus, Lando benefitted from rare error from Lewis Hamilton and Max Verstappen.

A win for Aston Martin who also benefitted from a late safety car to haul themselves up into 6th and 8th with Lance Stroll and Sebastian Vettel respectively.

A fail for Red Bull and Max Verstappen who’s troubles started on Saturday when the team boxed him from a pole lap effort leaving him to start in 8th. A struggle during the race with no DRS meant that Max was stuck fighting his way forward and he did but a late race restart error trying to pass Norris saw him run wide, forced another pit stop and left him down in 7th.

A fail for Mercedes who struggled with George Russell at the back of the pack for most of the day and two rare unforced errors from Lewis Hamilton leaving the 7-time champ down in 9th.

A fail for Williams F1 and Alpine who suffered a double DNF and that particularly hurts as Alpine loses their lead as “best-of-the-rest” in the constructor’s championship.

A fail for Yuki Tsunoda who binned it while his teammate Pierre Gasly scored a point.

I think I understand the reason the DRS was not activated for most of the race as to pass using DRS, you usually move off line in the DRS zone and perhaps in those zones there was still to much dampness off line to be safe but it did make the race more difficult for sure and perhaps that’s not a bad thing.

While other celebrities seem to give the cold shoulder to Martin’s grid walk, Will.I.am seemed to be on a press tour. Wherever there was a camera, he was there loitering for an interview so that’s quite a dichotomy.

Safety Car Review: What is up with the Safety Car infringement review and could the stewards not review during the race? No one likes to have the result of a race unknown at the end of the race. Ultimately Sergio was being reviewed for not keeping to within 10 car lengths of the safety car during the final full safety car period and he was handed a 5s penalty with a reprimand. AS he finished 7s ahead of Leclerc, he still retains his victory. 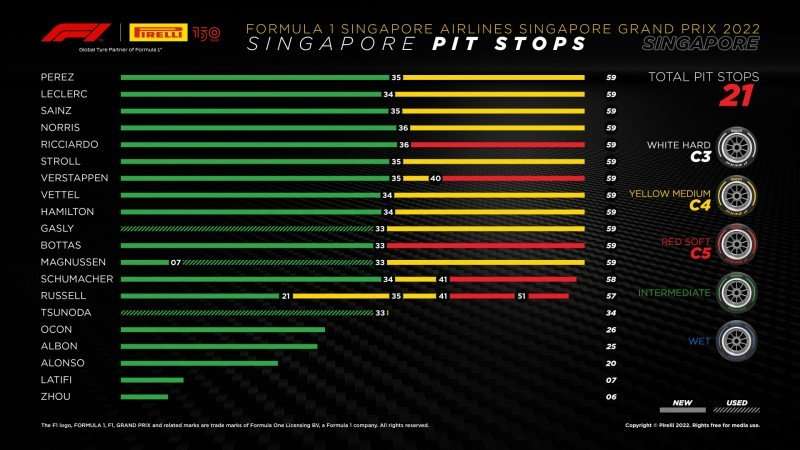 Red Bull driver Sergio Perez underlined his status as the man to beat on street circuits, following his Monaco victory earlier this year. He won the Singapore Grand Prix ahead of Ferrari team mates Charles Leclerc and Carlos Sainz. The top three all crossed the finish line on P Zero Yellow medium tyres.

The start of the race was delayed for an hour following a rainstorm that fell shortly before the cars were due to go to the grid. Once the rain had stopped, racing got underway on a wet track with all the cars on the Cinturato Green intermediate. More than half the race elapsed before the track was suitable for slicks.

Once more, the Safety Car played a prominent role in Singapore. The first Safety Car period came on lap seven, with nobody electing to stop for fresh tyres. There was then a Virtual Safety Car on lap 21, when Mercedes driver George Russell was the first to go onto P Zero Yellow medium slicks. The other teams eventually followed the same strategy, with the exception of McLaren’s Daniel Ricciardo and Alfa Romero driver Valtteri Bottas, who both chose the P Zero Red soft. Excitement in the closing stages came from Leclerc and Perez trading fastest laps, with the Mexican’s final effort being a 1m48.165s on the mediums. 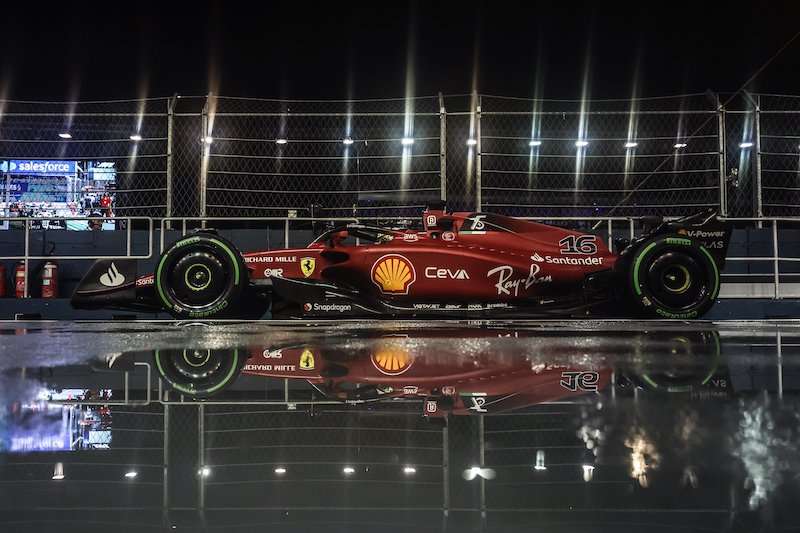 Like I said about Latifi and Tsunoda. I can see this race two ways, on the one hand it’s a stupid race, after turn one it’s just that a few people are going to hit the wall, otherwise the order’s set and the race is over. On the other hand, it does really test a certain skillset and it’s legitimately a massive test of driver ability, plus it’s nice in the series if there are races where the cars don’t just get sorted into order from fastest to slowest.

But on the third hand it’s a stupid race.

Yeah, we discuss that on this week’s podcast. It’s a tough track even in the best of weather.

I don’t understand why the commentators were so perplexed that the track wasn’t drying. Evapouration is governed by energy in time the difference between the humidity and the saturation of water in the air. Without the sun and with the humidity near 100%, there’s no mechanism for the water to disappear, it’s really just the cars throwing water off of the racing line, and whatever drainage there is.

Agreed. I live in a humid area so this is well known. I will say water drainage was more impressive given the equatorial-style downpour they had. That was very good. if they wanted exciting racing, they should have started on time on full wets and then that might have had two tire changes. One to inters and one to slicks.

Previous article
Leclerc takes Singapore GP pole position
Next article
Singapore GP Review | Podcast Ep 803
A very interesting race with some elements that neutered what a wet race traditionally delivers. Unforced driver errors, attrition and DNF's but with a couple VSC's and SC's and other elements, the strategy was difficult to unfold and with the track taking so long to dry, the switch to dry tires was late and left a very small window for undercut's or overcut's to really play out. A great win for Sergio Perez! Race Report: Perez wins Singapore GP