After 11 years, the Austrian Grand Prix returned and it did so in wonderful fashion. From the world-class facilities to the old-school circuit and even down to the culturally classic dirndl-clad grid girls—no bum-floss spandex perpetuating the objectification of women–, Dietrich Mateschitz put on a terrific event. If there was any doubt as to how much Formula 1 in missed in Europe, the Austrian Grand Prix was a brief glimpse with over 100,000 fans attending the race.

Aside from the great venue, the race wasn’t bad either. The circuit proved to be challenging even if it only has nine turns. The point-and-squirt nature of the circuit means that brakes take a drubbing at the Red Bull Ring and brake management as well as tire management was serious business all afternoon.

The Austrian Grand Prix is hosted by the Red Bull Ring in Spielberg Austria and even though it is Red Bull’s house, only one Red Bull sponsored car finished the race out of four. Tire deflation, and the resulting suspension damaged, ruined Scuderia Toro Rosso’s Daniil Kvyat’s race while his teammate, Jean-Eric Vergne, suffered brake failure.

Red Bull’s 4-time champion Sebastian Vettel’s miserable year continued with a loss of power only to re-set the system to toil at the back of the grid before retiring the car in order to save componentry for another day. This leaft his teammate, Daniel Ricciardo, the only Red Bull liveried car to finish the race in a distant 8th which is miles from his win just two weeks ago in Canada.

Mercedes nursed their brakes and tires to take the fight to the Williams duo who held the front row and eventually came out on top for a 1-2 finish extending Nico Rosberg’s championship lead by 29 points.

Mercedes read the tea leaves perfectly and even if it seemed that the circuit could ravage their brake systems, the duo of Lewis Hamilton and Nico Rosberg drove excellent races and were able to manage their resources perfectly.

Rosberg’s win extends his championship lead by 29 points and the signs are, he’s settling in for a long defense of his position as Hamilton is wringing the neck of his car in order to claw back points. A Mercedes battle to the end will be key and one has to wonder if the double-points finish in Abu Dhabi could come in to play for Lewis.

Regardless of what the traffic issues may have been, it is a big win for Mateschitz and Austria. The grand prix was stunning visually and the attention to detail was perfect. A huge win for Europe as getting F1 back to the continent is important and Austria is leading the way. Austria 1, AsiaPac 0.

A big win for Valtteri Bottas who scored his first-ever podium finish. The Finnish drive seemed awestruck during the post-race interview showing a humble side of Bottas and the impact F1 has on his life. A terrific result and big points for Williams in Austria with his teammate and pole-sitter Felipe Massa scoring a well-deserved 4th place finish.

A big win also for McLaren’s Kevin Magnussen who has been taking heat in the press over statements made by his veteran teammate Jenson Button regarding the lack of car development in the team due to having a rookie at his side. Magnussen seemed to use Austria in order to tell his venerable teammate to shut up as he scored a 7th place finish to Button’s 11th. 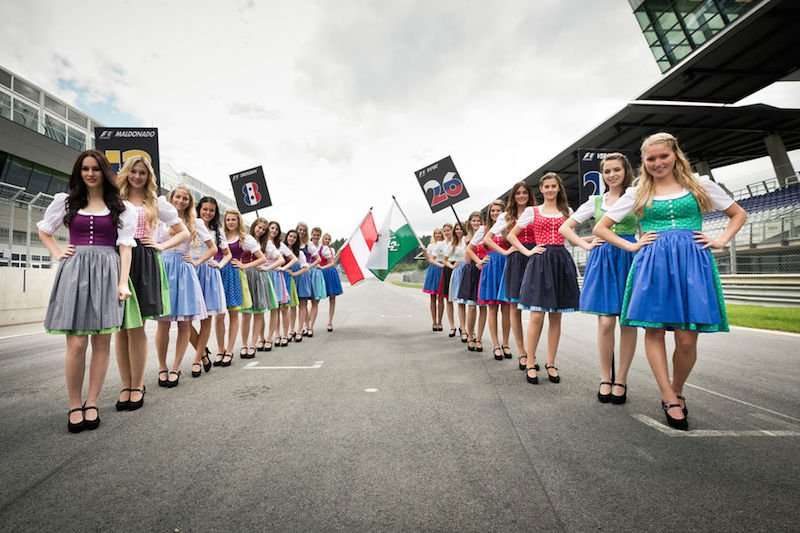 Also in the “Win” camp was Force India and Sergio Perez. The Mexican had a 5-place grid penalty from his collision with Mass in Canada and while the review of the penalty was upheld in Austria, the young Mexican turned disappointment into motivation by managing his tires better than most and finishing 6th after starting down in 11th. Perez, often accused of being ham-fisted on track, drove a gentleman’s race and looked every bit the driver that his fans know him to be. Perez used a completely opposite tire strategy to great effect.

An honorable mention must be given to Ferrari’s Fernando Alonso who ran with a pack his car had little business running with and managed to finish 5th giving the team accolades it needs but may not fully deserve.

Red Bull, the racing team, has to look at this weekend as a fail only finishing one car of its four-car livery. Sebastian Vettel’s patience is being tested every grand prix weekend and the pressure of the team’s home race didn’t help matters. Red Bull need to sort out Seb’s issues quickly and stop blaming him for issues beyond his control like Helmut Marko did last week.

Lotus has had another miserable weekend and talk about keeping motivation high, the team struggles to get Romain Grosjean a car he can remotely compete with. The teams social media and email updates are always full of “chin-up”, “keep-walking”, “dig-deeper” headlines but one wonders just how long email subject lines will prevail in a team rumored to be on the ropes. Both cars finished a lap down.

Sauber’s Adrian Sutil recovered with a 13th place finish but his teammate, Esteban Gutierrez, was released from the pits with an unsecured wheel garnering the attention of race control—they tend to frown on such things for very good reason.

Williams gains a WTH for their strategy on the pit wall. Having viewed Mercedes pitting for fresh rubber on the first round of stops, Williams chose to leave pole-sitter Felipe Massa and his second-place running teammate, Valtteri Bottas, out for extra laps which ultimately scuttled any chance of winning the race. Rob Smedley says tire wear was so close that to react to Merc’s stops would have meant potentially not finishing the race…er, ok. He’d know better than I would.

Bottas fared better than Massa in the ensuing pit stops but the reaction time during the second round of pit stops was equally delayed. Whether or not you believe Williams had the pace to hold off Hamilton or Rosberg isn’t the point, the team needed to put their drivers in a position to have to hold them off, not give the positions away due to reticent pit strategy. Regardless, it is a big points haul for the team and it was great to see them mixing it up with the Mercedes duo.

Another WTH moment coming from Lewis Hamilton fans is the suggestion that the team is purposefully making Lewis’s pit stops longer than Nico’s. I find this yet more Hamilton-mania crazy speak. We are measuring these stops to the hundredth of a second and to say that a group of men—a large group mind you—could perform .700 or .900 of a second slower for Lewis each time he came in is just simply nonsense.

I may never understand the Hamilton die-hard fan because it sometimes seems they go from mountaintop elation claiming Senna-like domination to instant hostility throwing out racism, conspiracy and acidic insults in less time than it takes to make a Lewis Hamilton pit stop slower than Nico’s. I find that kind of fan somewhat perplexing and seemingly devoid of balance or critical thinking at times.

If Mercedes could do what they are suggesting, they’d be Pietro Maximoff for crying out loud! Massa had a slower stop than Bottas, was that collusion between Bottas and the team to keep Massa down? It happens at every single pit stop to every team, one driver will have a slightly—and I mean SLIGHTLY—slower stop than the other one. We are talking about a second or less here folks. Go turn your couch or love seat in the complete opposite direction a few hundred times and start managing it down to .700 of a second.

In the end, the race was a great return of Austria and the nation put its best foot forward. Regardless of Red Bull’s lack of success at Sunday’s Grand Prix, Didi’s efforts in bringing the race back to Austria was a resounding success.