Red Bull Racing’s Max Verstappen took the win at the Formula 1 French Grand Prix at the Paul Ricard circuit. It wasn’t a forgone conclusion, despite his pole position, because Red Bull hasn’t fared well at Paul Ricard but this year’s Honda engine and the chassis has been a game-changer.

Still…Mercedes seemed to have long-run pace and there were questions about the first race with the new less-bendy rear wings and higher tires pressures leaving some to wonder if Red Bull had the race pace to win.

As it turns out, Max lost the lead at the start but the team did a brilliant job of managing the strategy of not only Max but his teammate, Sergio Perez.

A big win for Red Bull Racing who executed some very good strategy, even rolling the dice with a change to a 2-stopper to take the win. The undercut was very powerful in France and the team used that to leap-frog Lewis for the lead but they kept Perez out and that had Mercedes calculating the permutations to no avail as Max stopped again for newer tires and then hunted down both Mercs to take the lead and win on the penultimate lap. A repayment for the Bahrain GP and Barcelona earlier this year.

A win for Max Verstappen who lost the lead, undercut his way back into the lead but then changed to a 2-stopper and managed to hunt down Lewis for the win on the penultimate lap of the race. He increases his lead in the driver’s championship and it makes you wonder if Red Bull, at this point, are capable of beating Mercedes at all the races.

A win for Sergio Perez who was used to galvanize Mercedes and their strategy situation. The split strategy kept Mercedes a bit in check and Checo drove a terrific race to execute the strategy, maximize the points and gain a podium.

A win for Lando Norris and McLaren for a 5th place result just ahead of his teammate, Daniel Ricciardo, for a big points haul agains their closest rival, Ferrari. Dan had looked good all weekend but Lando came charging back on fresher tires in a strategy that was a bit adventurous. He executed perfectly and with Dan, punched Ferrari in the nose this weekend.

A win for Alpine’s Fernando Alonso who seems to be getting more comfortable in that car each week. Fernando dragged his Alpine to 8th place with his teammate, Esteban Ocon, down in 13th. Much-needed points for the team at their home race.

A win for Pierre Gasly who was in the mix all weekend and finished 7th just behind the McLaren’s. His teammate, Yuki Tsunoda, started from pit lane but the team did a good job with strategy and he drove well to get up to P13.

A win for Aston Martin who looked to be struggling at Paul Ricard this weekend but very long first stints left Sebastian Vettel and Lance Stroll getting both cars up into the points.

Also a win for Williams driver George Russell who took his difficult car up to 12th.

A fail for Mercedes who boxed Valtteri Bottas first, instead of Lewis Hamilton, and this left the champ unprotected against the undercut which proved very powerful this weekend. As such, Bottas was calling, early on, for a change to “plan B”, a 2-stopper, but the team ignored the call and one might argue that was to protect Lewis. In the end, Mercedes had no choice but to retain track position despite Red Bull gambling on the 2-stopper and it didn’t pay off.

A fail for Ferrari with Carlos Sainz in 11th and Charles Leclerc down in 16th. Ferrari left a lot of points on the table and McLaren’s points haul did serious damage for the Italian team’s quest to be third in the constructor’s championship.

What happened to Ferrari’s pace? Did the bendy-wing and/or tire pressure change impact them more than Red Bull? It’s one thing to be track specific but they were way off the pace at Paul Ricard.

I’ll have to go back and look at the data but at the time of writing this, I am not sure what happened to Esteban Ocon. He looked quicker than P14 all weekend long. 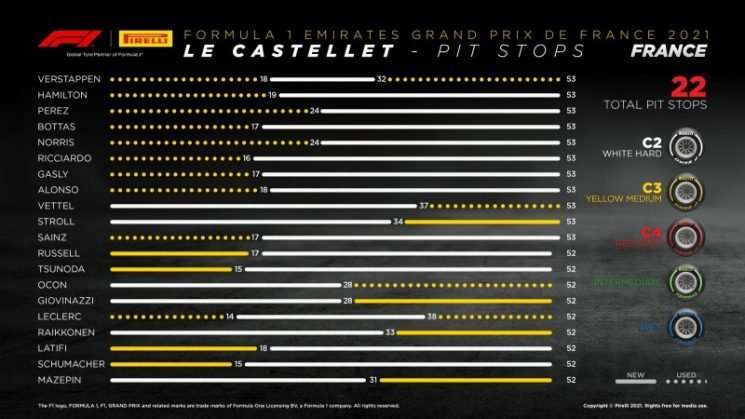 Unless there’s such a thing as ‘DRS semi-open’, The Sky Sports commentators could help F1 become more energy efficient by saying ‘DRS open’ instead of ‘DRS wide-open’, thus saving that extra bit of electric energy needed to amplify and broadcast that additional word.

It was a good race on a bad track.

Previous articleVerstappen on pole for French GP
Next articleFrench GP Review | The Parc Fermé F1 Podcast Ep 737
Typically a ho-hum race, the French GP turned out to be a tactical showstopper with Lewis and Max battling to the very end. Negative CamberRace Report: Verstappen beats Hamilton for French GP win