The 70th anniversary race of Formula 1 was a blistering one…literally. After last weekend’s tire issues for Mercedes, there was every reason to be cautious heading into this weekend. In fact, Pirelli mandated an additional 2psi in the front tires and 1psi in the rears to help protect the tire carcass. It didn’t work for Mercedes but it did for Red Bull Racing.

Red Bull’s Max Verstappen managed to push Mercedes and make the best use of his car’s gentle nature on the Pirelli tires to take the win over Lewis Hamilton and Valtteri Bottas.

Max was the only one of the top 10 on the grid to start on the hard tire, and used their durability to run a longer first stint, which allowed him to move into the lead and then defend his advantage.

A win for Red Bull Racing who took the fight to Mercedes on Saturday during qualifying by using last weekend’s qualifying compound while Mercedes used the softer compound to take pole. This allowed the team to run a superior strategy despite having a slower car and they also banked that the Mercedes car wouldn’t like the hot weather and softer tire compounds. They were right.

A win for Max Verstappen who, despite calls from the team, assessed the on-track situation and knew he had tires to push in the first stint to force Mercedes into a tire-limited race. Having a terrific strategy is one thing, executing that strategy is everything and Max did that by taking matters in his own hands on track.

It might not be a complete win for Alex Albon but his race was a recovery race and he was one of the most prolific passers on Sunday making up many spaces to finish in P5.

A win for Charles Leclerc who, like his teammate, struggled all weekend long in a Ferrari that is well off the pace but he managed to drag the red car by the scruff of the neck to bring it up to P4 on a 1-stopper.

A win for Esteban Ocon who beat both McLaren’s to get Renault in the fight for best of the rest both McLaren and Racing Point. Daniel Riccardo rant ell all day but a late-race spin, he may have finished in the top 10 as well.

A win for Daniil Kvyat who claimed a point in P10 after a difficult race last weekend. Both Alpha Tauri’s finished nose-to-tail and continue their good pace.

A fail for Valtteri Bottas who managed to convert pole position into a 3rd place finish. Bottas seemed to be the victim of a team strategy solely focused on maximizing Lewis Hamilton’s race at the expense of Bottas. Clearly not happy after the race, Bottas has every right to ask why he boxed 10 laps earlier than Lewis, why the team was focused on Lewis’s race against Max and not Valtteri’s race for a win. He may not have had this race locked, given the tire issues, but if they were focused on getting Bottas in 2nd, it may have helped.

A fail for McLaren’s Carlos Sainz Who sunk to P13 while his teammate, Lando Norris, finished an uninspired P9 and that’s not a good result for a team who is gunning for best-of-the-rest. There were a lot of points left on the table given two Racing Point cars and a Renault finished ahead of them.

A fail for Ferrari and Sebastian Vettel for finishing down in P12. For two weekends the German hasn’t been able to get on top of his car’s performance issues and his first-lap spin didn’t flatter a car that isn’t up for the challenge of delivering a stellar recovery drives. It’s hard enough struggling with a car that doesn’t like you or your driving style much, a team that delivers you a second-rate strategy and then spinning on the first lap to add to the downward spiral. Getting beaten by two Alpha Tauri’s is not something I thought I would see but I doubt it is what Seb thought he’d see too.

Not sure what happened to Nico Hulkenberg’s tires and while he said they were blistered and he wasn’t sure they would make it to the end, I tend to think the team boxed him late handing the position to Lance Stroll and that seems odd. If they were afraid of Albon’s pace—and Alex did manage to get past Stroll—then why not box both for Reds and let them make a run at Alex or just hold track position and force Alex to earn it? Instead they said the tires on Nico’s car were at risk and perhaps that’s true given Nico isn’t used to managing the health of this year’s compounds in a car he doesn’t know well and Lance does.

Not exactly sure why Kevin Magnussen felt lunging at a car to his right as he re-entered the track was a good idea but that garnered a 5s penalty and he eventually retired the car. His teammate finished P16 and this is becoming a very painful run for Haas F1.

It was neither a win nor fail for Lewis Hamilton as he did manage a podium equaling Michael Schumacher’s podium count of 155. I am intrigued about Mercedes and their issue with heat and tires. Lewis is as good as it gets in tire management arena and yet he and Valtteri had blisters almost immediately after their first stops. If Lewis can’t manage these tires on a Mercedes, no one can and that could be the Achilles heel for the team in the remaining, very hot locations. Time will tell. 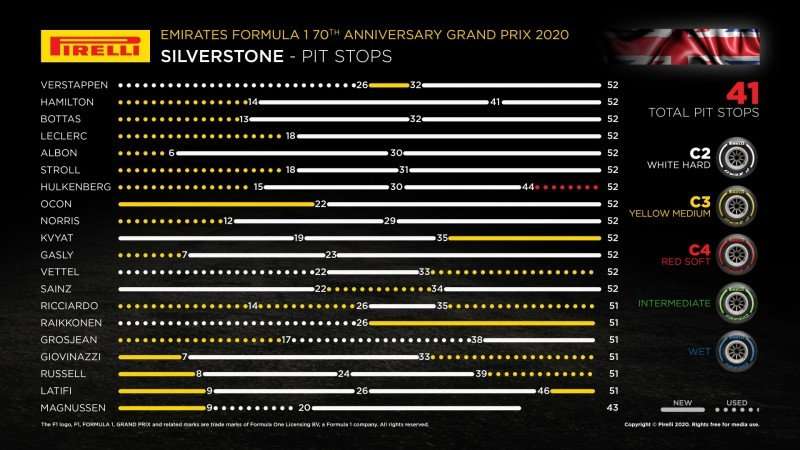 Seems to me that Max won with tire choice in Q2 because it gave him more options on how to mange the race. It also seems to me that Mercedes is using some very tight strategy predictions, and they keep tripping over their own pace because the car is much further out in the performance envelope than the tire design.

Also, I’d rather have graphics for real time measurements of voltage in the air-powered wheel guns than the tire percentages they’re using. It’s not even clear what it’s a percentage of.

Good point. Interesting that they struggled with deflation and sidewall issues and when aired up 2psi more, they slid more and blistered the fire. A fine lin between lower downforce and sliding too much. Seems like a real booger to solve for.

Here is a quote from Ferrari boss. Things are not good over there: “I honestly think there is little to say about strategies. We [were early] perhaps by a few laps with the call that made him lose the position to [Kimi] Raikkonen. However, we knew he would recover without losing time. “It allowed Charles [Leclerc] to continue his comeback. Overall, it was the right choice for the team and we don’t think we penalised Sebastian. “He regained [the position] immediately on Kimi, he wouldn’t have been able to do an overcut on [Daniil] Kvyat, because he was going as… Read more »

Wow, Ferrari think that they didn’t do anything wrong. Yes, Seb spin didn’t help, but the folks in charge of the strategy did something contrary to what was discussed prior to the race, which Seb immediately brought up after the pit stop. For the past few years, Ferrari strategy has been the main reason why they have failed to get the best results, just like in Hungary this year, when they called Seb to pit for softs and he overruled them and ask for mediums and at the end who was right?

Previous article
Penalties, appeals, mobs, contracts and a virus
Next article
TPF F1 Podcast Ep 694 70th Anniversary GP review
It may not be perfect but the soft tires and high track temperature is apparently what it takes for any team to battle with Mercedes and have any hope of beating them. The strategy was fun to watch unfold and Silverstone did a great job over the past two weeks. Race Report: Verstappen beats Mercedes duo at 70th Anniversary GP