After the Styrian GP, you’d be forgiven for thinking that Red Bull looked set to repeat their win on the same track a week later. That’s exactly what happened but this time, in an even more dominant fashion with Max Verstappen leading Valtteri Bottas and Lando Norris home.

A big win for Max Verstappen and Red Bull who crushed the opposition today finishing 17s ahead of Mercedes driver Valtteri Bottas. Red Bull had Max’s car hooked up on both sets of Pirelli rubber and Max cruised through a sea of orange grand stands to take a commanding win and lead in the Driver’s Championship.

A win for McLaren and Lando Norris who has become the UK’s newest hero with a fantastic qualifying effort and even overcame a suspect penalty of 5s to finish on the podium ahead of Lewis Hamilton and just behind Bottas. Lando did an amazing job all weekend and Daniel Ricciardo sprang to life as well to finish 7th giving the team good points in their battle against Ferrari. Dan did well trying to hold off the Ferraris but Carlos had fresher tires in the end. Lando may have even gained a new fan in the UK in the form of Lewis Hamilton who praised him over the team radio.

A win for Fernando Alonso who was balked during qualifying but managed to put on a good show hauling himself up into the points. Unfortunately it was at the expense of George Russell.

A big win for George Russell who had a terrific weekend and only narrowly missed out on his first points finish for Williams finishing in a terrific 11th. He was doing a fantastic job holding off Alonso but just didn’t have the pace in the DRS zones to keep a 2-time behind him.

Also a win for Pierre Gasly who drove a quiet race into the points for a 9th place finish.

A fail for Sergio Perez who seemed intent on getting 5s penalties and while one could argue the penalties were too harsh, the stewards felt his running cars wide was too aggressive. Sergio could have put even more of a punch to Max’s nearest rival had he finished on the podium ahead of Lewis Hamilton.

A fail for Yuki Tsunoda who managed to cross the pit entry line not once but twice for two penalties. With Pierre up in 9th, Yuki may have missed out on a. Point.

A fail for Mercedes and Lewis Hamilton who was struggling with some damage and were unable to mount a challenge to Red Bull. Valtteri Bottas was best positioned but still lacked pace to the Red Bull.

I’m not sure what happened to the pace of Aston Martin but both Lance Stroll and Sebastian Vettel were well off the pace. Vettel was punted off track by Kimi Raikkonen on the last lap which was odd.

Not quite sure what Nick Latifi is struggling with but the pace disparity between his teammate is massive and George is showing that the Williams has more pace than what Nick is showing.

I must have missed the explanation but I am not sure what damage Lewis Hamilton had to his car or if it was self-inflicted by running over the curbs. 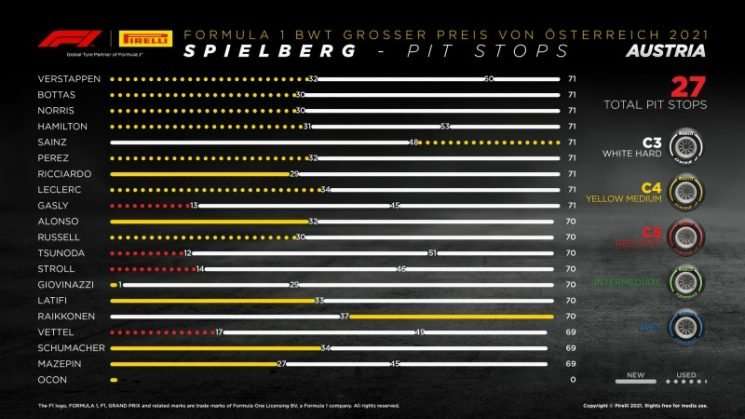 Previous articleVerstappen takes pole ahead of Norris for Austrian GP
Next articleAustrian GP Review | The Parc Fermé F1 Podcast Ep 739
Race Report: Verstappen dominates Austrian GPIt was a clinic of dominance in a sea of orange for Max and Mercedes continued to struggle in Austria. It is a decent points lead as Red Bull head back to the UK. Can Mercedes mount a recovery effort at Silverstone?