The fact that Max Verstappen won the Canadian Grand Prix may not have sound that surprising given his pole position and several cars out of position for the start of the race. However, what was surprising is just how close the race was between Max and Ferrari’s Carlos Sainz.

The late Safety Car meant that the field would close up for the last 10 laps or so and for those ten laps, we saw a masterclass in attacking and defending between the Red Bull and Ferrari driver. Max was able to just keep Sainz far enough behind him that the DRS never quite worked to get the Ferrari around him.

The other surprise was just how miserable Mercedes looked on Friday and how quick they looked on Sunday with a podium for Lewis Hamilton and a 4th place for George Russell. It’s unclear what changes the team may have made and there was controversy around mainstays and technical directives but in the end, perhaps having James Allison at the race was a good luck charm.

A win for Red Bull’s Max Verstappen who takes another leap in the driver’s championship points tally. It was a close-run thing but Max was clinical in his driving by being fast where he needed to be to keep the Ferrari of Sainz behind him in the last 10 laps.

A win for Ferrari who had pace, straight-line speed and the ability to use the curbs coupled with a good strategy for Carlos Sainz to keep it a close race to the end. A win for Carlos who needed to capitalize on the situation with teammate Charles Leclerc starting toward the back. He drove to P2 and re-opened his account in the confidence bank.

A win for Mercedes who, amidst all the technical directive discussions and controversy, managed to raise their cars on Saturday, still find pace and give Lewis Hamilton a car he could take to the podium with teammate George Russell just behind him. If James Allison is a lucky charm at the race, I’d take him to all of them but in all seriousness, it is a good reversal of their recent form.

You could argue that Alpine’s Fernando Alonso starting in P2 means that finishing P7 behind his teammate was a fail but it isn’t because Alonso said before the race they were racing for P6. Unfortunately he had issues and a post-race penalty dropped him down to P9. Despite that, the strategy worked and the Alpine’s were both in the points.

I think you have to give a win for Alfa Romeo’s Zho Guanyu and Valtteri Bottas with a dual-points finish in 7th and 8th. Especially Bottas who had a ragged weekend but came home in the points with a long first stint.

Although clawing his way back to P5 by driving his heart out should be a win, I wonder if Ferrari’s strategy with Charles Leclerc left him out too long meaning had too much work to do in the late stages of the race. Admittedly he put in the work but I’m curious with Ferrari’s pace if he could have made it to the podium or 4th place with Sergio Perez out of the race.

A fail for Red Bull who had a gearbox issue ending Sergio Perez’s race and that’s a big hit in the driver’s championship. They need to sort their issues out but it’s hard to know what Sergio May have done as he crashed in qualifying and seemed off the pace this weekend.

A fail for Fernando Alonso who had a nice P7 in hand but lost it due to excessive weaving to keep Bottas behind him and this cost him two places.

A fail for Yuki Tsunoda who exited his final pit stop like a bat out of hell and went straight through the corner and hit the wall. It brought out a safety car the big sister team definitely didn’t need.

Not sure what the issue was for Mick Schumacher’s car but that’s a gutting result for a guy who was running very well and in the points.

Equally, not sure what happened to Pierre Gasly’s car yet but the call to lift and coast early on left him down in P14.

Equally, I am not sure what happened to Lando Norris’s main engine that had them revert to an older engine but the slow pit stacked pit stop put paid to his race and that’s unfortunate. If you wanted Dan to do better, hobbling Lando isn’t the way to do it. 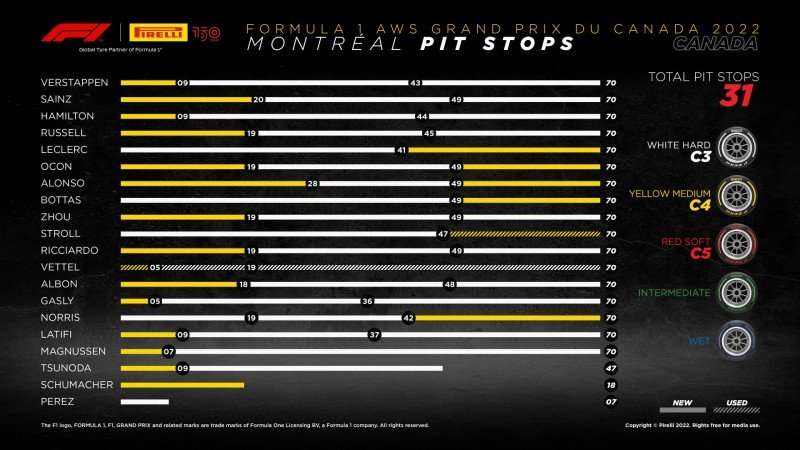 Can anyone fathom why Haas didn’t pit MAG under Yuki’s Safety Car? And can anyone remember any other team than Haas that fairly consistently start a season looking strong, then drops to the back of the grid? It’s their specialty, or something. ~X8

A recent change to the F1 Technical Regulation states, "In…

Are these changes immediate?

I know he knows about the Sky commentary. :) I…

Bit of a story, but a few years ago, we…

Previous articleVerstappen leads Alonso for Canadian GP
Next articleCanadian GP Review | The Parc Fermé F1 Podcast Ep 788
Race Report: Verstappen narrowly wins Canadian GPI really enjoyed this race due to the cars out of position, the VSC's and SC that made it a strategy nightmare and the great Ferrari and Red Bull battle at the end. Not to mention a great turn of form from Mercedes.