On Friday, the Red Bull duo looked set to do very well at this weekend’s Mexican Grand Prix. Then Saturday came and the Mercedes duo of Lewi sHamilton and Valtteri Bottas stole the show with a one, two during qualifying and Red Bull spent the day nursing the rear wings of their cars with aero issues and stores fractures.

You could have drawn the conclusion that perhaps Mercedes might repay the win that Red Bull had two weeks ago on a Mercedes-flattering track since Mexico is usually happy outing grounds for the energy drink team. Could Mercedes beat Red Bull on a track they were supposed to be dominant at?

The answer on Sunday, was a simple “no.” Max Verstappen took a dominant win over Lewis Hamilton who barely managed to keep hometown hero Sergio Perez behind him. Perez was the first Mexican driver to lead a Mexican grand prix and score a podium finish and this delighted a heavily biased sell-out crowd.

A big win for Red Bull and Max Verstappen who increased their lead in the driver’s championship by 19 points and with Sergio’s podium, Red Bull clawed to within just one point in the constructor’s championship. It was a huge emotional win for Sergio who had struggled early on in the season but has come on song in time to delight a sell-out Mexican grand prix.

A win for Ferrari who managed to take the lead over McLaren in the constructor’s championship by 13 points despite some internal team radio messages from Carlos Sainz accusing Charles Leclerc of deliberately trying to hold him off despite team orders. Regardless, the team swapped the drivers back and Leclerc led Sainz with a 5th and 6th place finish.

A big win for Pierre Gasly who finished ahead of the Ferrari’s and was best-of-the-rest in a quiet but very good drive for Alpha Tauri.

A win for Alfa Romeo’s Kimi Raikkonen who finished 8th ahead of Fernando Alonso’s Alpine.

A fail for Mercedes who saw Bottas get spun by Daniel Ricciardo at the first turn dropping him tot he back and Lewis Hamilton struggling to keep up w9th Max all day long. Mercedes felt that Mexico would be a Red Bull race but perhaps they had a brief moment of hope that Saturday suggested they may have a shot. Regardless, Lewis did minimize the points damage by keeping Perez behind him while Bottas managed to steal the fastest lap point away from Verstappen.

A fail for McLaren who had a grid penalty for Lando Norris and Ricciardo had the moment with Bottas that spoiled his race and chances of minimizing the points damage that Ferrari did.

Not quite sure what Red Bull’s issue was but according to Adrian Newey, the rear wings they brought were high downforce configurations and the aero load was more than they were expecting causing issues with the wings but they did seem to sort that out by Sunday.

It was interesting to hear Mercedes say they had solved their low-oxygen engine performance and that this contributed to Saturday’s pole position but they really struggled for pace come Sunday with Max finishing over 16s ahead of Hamilton. 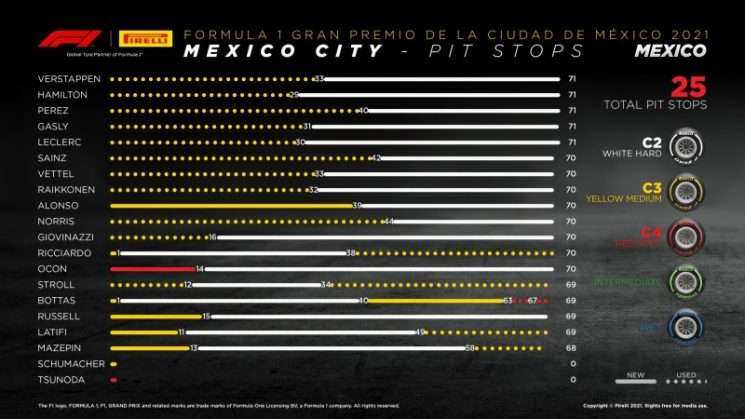 I’ve never seen duct tape on a Formula 1 car before. Thank you RedBull.

When I went the to AUS GP, on the Friday…

Hi Todd and Paul, Like always thank you for the…

Has anyone checked Adrian Newey‘s office to see if his…

The old paddock joke was "present all the F1 cars…

Previous articleBottas on pole for Mexican GP
Next articleMexico City GP Review | The Parc Fermé F1 Podcast Ep 756
IT was a good race even if a bit pedestrian but to see Checo get teh adulation he deserves at home was terrific! Negative CamberRace Report: Verstappen takes dominant Mexican GP win