The Saudi Arabian GP was a very eventful race from terrorist attacks to massive crashes and a very recalcitrant Mercedes for Lewis Hamilton. In the end, as was the case in Bahrain, it was a battle between Ferrari and Red Bull.

Max Verstappen went to battle in his Red Bull against a very fast Charles Leclerc in his Ferrari and having started down in fourth, Max had a lot of work to do in order to get to the front.

In what is becoming a bit of a theme, the two played chess with the DRS detection zones to pass each other but this time Max didn’t get caught out like he did in Bahrain and he used the tricky play to take the lead from Leclerc on lap 47 and held on to win. Charles followed closely in second and his teammate, Carlos Sainz, took third on track.

A big win for Max and Red Bull who entered the race pointless after a fuel pump issue in Bahrain. To come out of the Saudia Arabian GP with a win open his account not he defense of his title.

A win for Ferrari who managed to secure second and third and Charles hounded Max for the final three laps. This bodes well as the season could see a terrific battle between the two marques that is track-specific.

A win for George Russell who had a better weekend in his Mercedes than his teammate Lewis Hamilton. To come home in 5th is quite a feat in such a struggling car. Good on Merc for finding some small improvements for George and for George to wrestle the car into the top 5.

A win for Kevin Magnussen and Haas F1 after a harrowing crash on Saturday for Mick Schumacher. Kevin managed to get his car up into 9th for points in a tough weekend for the team.

Through no fault of his own, Sergio Perez couldn’t manage to convert his outstanding pole position into a win due to being hung out to dry during the safety car period. Sergio had just boxed when Latifi hit the wall prompting a safety car and this left him down in 4th at the restart where he finished.

A fail for Nicholas Latifi who is rapidly becoming crash fodder over a race weekend. Equally unfortunate was Alex Albon clouting Lance Stroll and ending his race. A bad weekend for Williams.

A fail for Mercedes and Lewis Hamilton who struggled all weekend long and while you have to admire the gamble on a setup direction, it didn’t work for Lewis and he struggle to get a point.

A fail for Alfa Romeo as Ferrari-powered cars who couldn’t score this weekend. Valtteri Bottas suffered a DNF while Zho Guanyu had two penalties and struggled at the back. To be fair, he did bring it home in 11th thought.

Not quite sure what was going on with Daniel Ricciardo and Fernando Alonso’s cars as both were having good races, Fernando running up in 7th, as they stopped in the pit entry. The VSC was deployed but I was wondering if the full safety car might not have been better. Perhaps not.

Still not sure what is happening to the Mercedes-powered teams as they are struggling for shove. Such a reversal of fortunes given their dominance of the sport for eight years. Perhaps having so many people leave their engine program is having an impact? 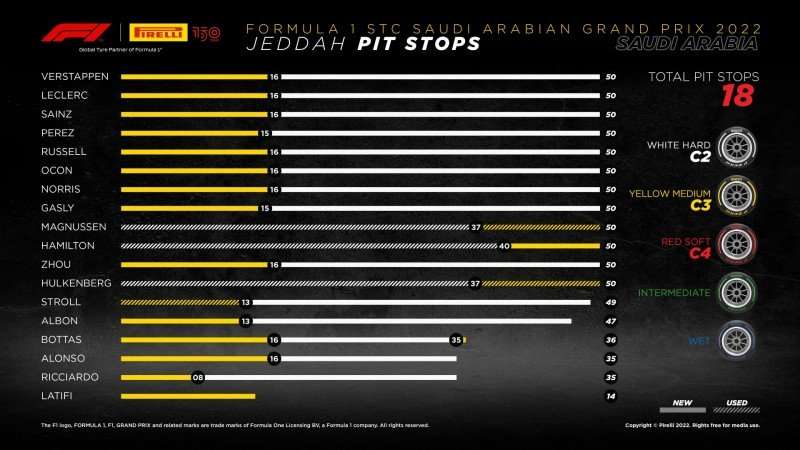 “the full safety car might not have been better. Perhaps not. ” Ask Hamilton, I’m sure he has a strong opinion.

I hope Hamilton is enjoying the large piece of humble pie that was served to him.

two issues here… first is that it was not a terrorist attack but as Yemen and Saudi Arabia are at war (regardless of “bad guys” we get to name automatically as terrorists), perhaps the drone attack was predictable for the F1 organizers. Second, luck always plays a part in racing, we all accept that, but Perez’s 1 lap early pit stop changed everything and then later the second safety car allowed Max to get close enough to Leclerc to, oh, sure, bravo with DRS and a faster car you managed to pass, win. Frankly, the ridiculous rules with “free pitstops… Read more »

Hey, one important thing I heard on the BC radio show: The gasoline has changed and wrong-footed MB engines? Is that true?

I’ve not done any level of work with Mobile (I would love to) or Petronas but I have spent time with Shell and I can tell you that if anyone was going to get on top of the F1 E10 fuel, it was going to be Shell. As Vettel told me when he moved to Ferrari, they all do a good job but Shell is just another level.

I agree, but why did F1 change the fuel? That’s odd.

The fuel was changed to meet environmental targets. To bring it in line with that commercially available for road cars.

Hey, thanks for the update. It was puzzling.