The Abu Dhabi Grand Prix has traditionally been a low-passing, dull affair but this year, well, it lived up to its reputation except this time, it was not a Mercedes showcase. For once, the Mercedes domination wasn’t present. It was the usual Harlem Globetrotters (Mercedes) vs the Washington Generals (everyone else) like it’s been for seven years. This time, Max Verstappen was able to take advantage of a Mercedes team nursing the stubbed-toe of a dodgy MGU-K and take the win.

Verstappen led a flawless race for Red Bull followed by the Mercedes duo of Valtteri Bottas and Lewis Hamilton. Red Bull’s Alex Albon had a good race to finish 4th but it was the 5th and 6th place finish of McLaren’s Lando Norris and Carlos Sainz that secured third in the Constructor’s Championship worth millions in prize money and that’s important for a team who just announced they are selling 15% of the team to a new ownership group based in the US.

A big win for Red Bull, Honda and Max Verstappen. While you could argue they beat a Mercedes team nursing an MGU-K issue, they still needed the win and perhaps it may help keep Honda interested in assisting the team when they leave the sport in 2022.

A big win for McLaren for securing third in the Constructor’s Championship over Racing Point which is worth millions. The team need every dollar they can get and this was a terrific result by Carlos and Lando who drove terrific races.

A win for Daniel Ricciardo in his last race for Renault by making his Hard compounds last and finishing 7th. Esteban Ocon, in the other Renault, added salt to Racing Point’s wound by passing Lance Stroll on the last lap to finish 9th.

A win for Alpha Tauri’s Pierre Gasly who had a nice drive to 8th besting his teammate and finishing off his season is style. 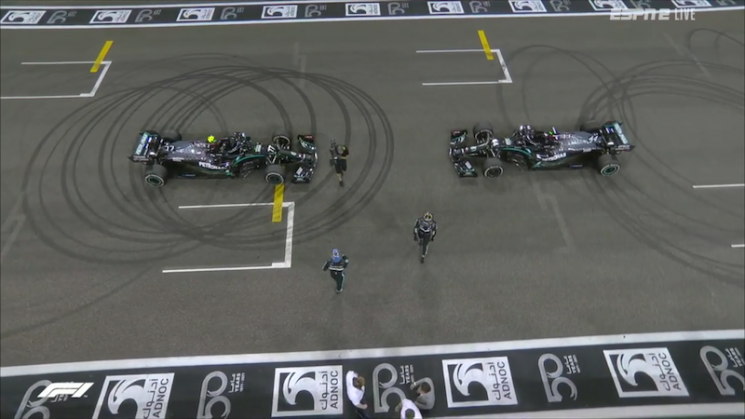 Kudos to George Russell for finishing 15th in a Williams car and anyone would tell you that takes some doing.

A fail for Racing Point who entered the race in 3rd place in the Constructor’s Championship but with a DNF for Sergio Perez and Lance Stroll drifting backwards to 10th place, the elation they had a week ago disappeared in 55 laps and cost the team millions of dollars.

A fail for Ferrari who stayed out during the first Safety Car period dropping them back to 13th and 14th. An indicative result for their season and the last race at Ferrari for Sebastian Vettel. The shock announcement of Louis Camilleri’s departure as CEO, and Mattia Binotto’s repeat absence from the pit wall is just another tangible example of how Ferrari’s downfall since sacking Luca di Montezemolo and much of its management is still causing major issues.

Not exactly sure why Lewis Hamilton didn’t take this week off to recover fully from COVID-19 but then if I was Lewis, I would want back in that car. What is more interesting is that Mercedes chose to let Lewis get back in that car even when he wasn’t 100% instead of giving George Russell another chance. Lewis had nothing to prove by getting in that car but I suspect Toto Wolff’s commentary about keeping Bottas for 2021 is a reason he didn’t want the controversy to ripen if George sat in and beat Valtteri again.

A WTH for the DV LED display on the podium for all the seaming issues that need to be adjusted. Sorry, my day job creeping in. 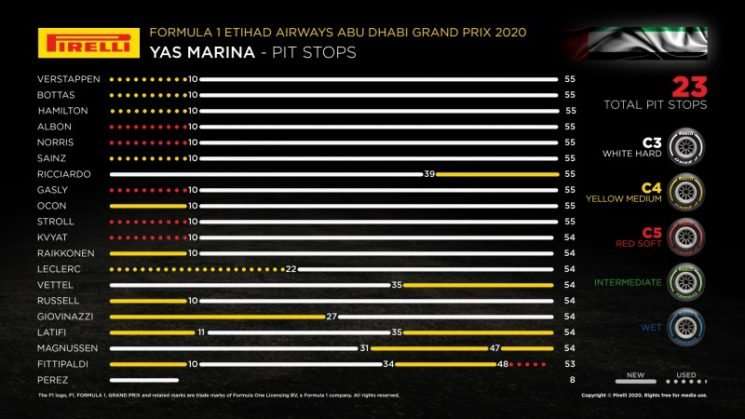 Well I was wrong about Hamilton dominating the race upon his return. Guess MB ran out of engines, and Lewis wasn’t 100% Still even with those handicaps, only Max was able to challenge them.

Hamilton should not have raced. I’m surprised the FIA and Mercedes allowed it, given what other drivers recovery time was with COVID. It was irresponsible. IMO

What I don’t understand is why Merc didn’t take the grid penalties for LH and VB, put in a new engine and all the relevant components in both cars, start from the back, and go for it. There were no titles in play and it would have been fun to see how far the Mercs could get up the grid by the end of the race. It nothing else, there would have been a few more passes to watch. Oh well . . .

So, just curious, if this was 3 stars what would a 2 or 1 star race look like? The cars dont show up and the guys just make ‘vroom vroom errrrt-squeak vroom’ noises with their mouths?

This was the best Abu Dhabi GP I’ve ever watched! Fell asleep around lap 23 and woke up at Lap 47.

I know Abu Dhabi pays dearly for the privilege as the last race in the F1 season but isn’t it time for someone, ANYONE, to question if it’s a good idea to end the racing season with such a sleeper race venue? If F1 is supposed to be riveting, exciting and entertaining, shouldn’t its last race reflect that? Don’t change the track layout, just change the venue.