We knew heading into the Formula 1 Dutch Grand Prix that the level of competitiveness would be closer and most felt that would be between Red Bull and Ferrari but as it turned out, Mercedes were very much in the hunt as well.

Despite the close racing, Max Verstappen was able to rely heavily on his skill and the strategy call of his team to navigate from pole through a Virtual Safety Car and an actual Safety Car to give him another win at his home grand prix. Max was followed by George Russell’s Mercedes and the Ferrari of Charles Leclerc.

A win for Max Verstappen and Red Bull—specifically the Red Bull strategy team—who managed to hold off just about every counter strategy Merceds and Ferrari threw at them through the VSC and SC sessions. It still required a very good drive and that is exactly what Max delivered to extend their lead in the constructor’s and driver’s championships.

A win for Mercedes and specifically George Russell who took a 2nd place podium finish. Mercedes were taking the risk, covering both track position and tire compound/health, with Lewis hamilton and George Russell respectively. While it didn’t work out for Lewis who stayed out during the SC to protect track position, it was the pit stop for Russell to match Max’s soft compounds that paid dividends. Lewis finished 4th.

A win for Fernando Alonso who managed to keep his Alpine ahead of Lando Norris’s McLaren and with Esteban Ocon’s Alpine in P9 and Daniel Ricciardo’s McLaren down in P17, it keeps Alpine ahead of McLaren in the constructor’s championship and best-of-the-rest.

No sure what happened to Sebastian Vettel but I think Lance Stroll had a win weekend with a P10 and he qualified in P10. A good weekend for the Canadian.

A fail for Ferrari who still managed to turn what should have been a competitive race for them into an also-ran affair. The disastrous pit stop for Carlos Sainz surgically removed him from any real chance of a podium and Charles Leclerc’s race wasn’t helped by the VSC or SC to any great effect. To be fair, Charles was able to chase down Hamilton and pass for the final podium position so not all was lost.

A fail for Daniel Ricciardo who just looks like a man who’s had the stuffing taken out of him. One has to consider that Lando’s points finish is representative of the car but Dan just isn’t able to get on top of the car. Also makes you wonder, given Alpine’s lead in constructor’s championship, if seeing out the rest of the year with Dan is going to continue to be this painful for both driver and team.

At this point, it seems like Williams might be money ahead to put whomever they are looking at for 2023 to replace Nicholas Latifi in the car on Fridays and Saturday morning. Nicholas is just not getting it done and that seat time could be very useful for their next driver…like Nyck de Vries for example. I can’t recall how many free-practice sessions the reserve driver can drive during the season.

A WTH moment for Yuki Tsunoda who stopped on track saying his wheel wasn’t fit properly then boxed, had his seatbelts adjusted and proceeded to go back out on track and stop again. Apparently is a an issue with his differential that stopped the car.

I have no idea where the conspiracy theories are coming from with regards to Yuki’s situation but some on social media are saying that they did that in order to make sure Lewis hamilton didn’t win. The tinfoil hats are firmly on with some fans. Alpha Tauri have nothing to gain in that situation. 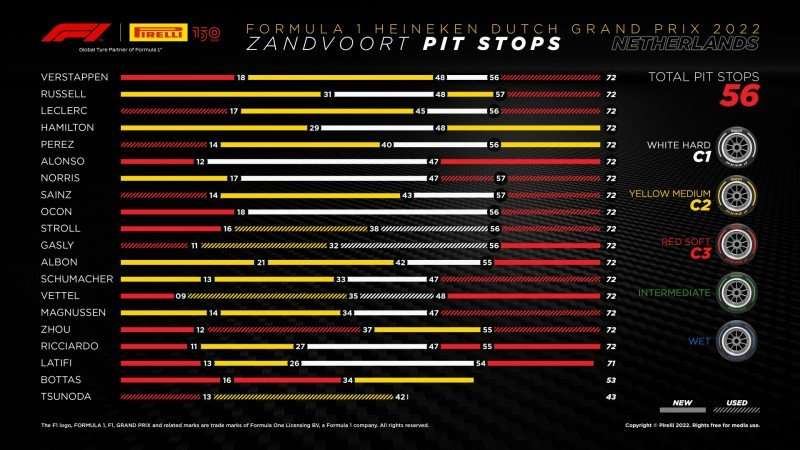 The phenomenal performance of the P Zero White hard tyre, along with a virtual safety car and safety car, influenced the outcome of the race. Verstappen started from pole on the soft tyre in his Red Bull and then switched to the medium tyre, which gave Mercedes driver Lewis Hamilton – who had started on the medium – an advantage in terms of track position. Once Hamilton switched to the hard, he was able to make his pace count. But during the race neutralisations, Red Bull made exactly the right strategy calls, with all the frontrunners making the same number of tyre changes in the end. At the final re-start, Verstappen found himself on soft tyres behind Hamilton on the medium tyres, and he was able to use the speed of this compound to help make the difference.

Looked to be a 1 or 2 stop strategy for most teams. Ended up being 4 stops. Best laid plans… I don’t think I heard one mention of track limits during the race, thank goodness. I’ve watched IMSA and NASCAR and they seem to be fine with no or at least limited track limits.

It seems that Yuki was getting out of the car that’s why the belts were loosened.