Despite just three hundredths of a second between them during qualifying, it was Max Verstappen who converted his pole position into a win at his home grand prix in Zandvoort beating Lewis Hamilton and Valtteri Bottas.

The Zandvoort circuit is part of an elite series of “old school” tracks that has re-emerged on the calendar, in large part due to the success of their Dutch driver, Verstappen, but I haven’t see this type of fan support since the Michael Schumacher days in Germany. The sea of orange was mind boggling and Max delivered the result they all wanted.

Lewis had a very good race on balance and kept Max honest the entire day despite not having the pace for a win. That didn’t stop Lewis from delivering a fantastic drive and the team throwing every strategic move in the book at Red Bull to try and hobble Max. In the end, Max was simply too quick and controlled his home grand prix from start to finish despite not having his teammate, Sergio Perez, near him for protection.

A big win for the Dutch people and Zandvoort who put on one of the best grands prix I’ve seen in a while with thousands of Max fans, smoke bombs, DJ Tiesto and an amazing rendition of the national anthem by Davina Michelle. It was the first race here since 1985 and while it isn’t a prolific passing circuit, it provided a backdrop that rivaled the other old school tracks such as Silverstone, Monza, Spa Francorchamps and Japan.

A big win for Red Bull who now take the lead back from Lewis in the driver’s championship. Max’s hometown win was a huge boost for the team, for Max and for the Dutch GP and Zandvoort. As the first Dutchman to win, it was an amazing atmosphere and Red Bull’s strategy covered every move Mercedes made despite having Sergio Perez out of contention.

A big win for Pierre Gasly and while the rest of the world voted Sergio Perez as the driver of the day, I am slightly befuddled because I think Pierre had an amazing qualifying performance followed by bringing his Alpha Tauri home in 4th place ahead of both Ferrari’s! That’s an amazing drive.

A win for Ferrari who are locked in a tight battle in the Constructor’s Championship with McLaren as they finished 5th and 7th to move them into 3rd place ahead of the Papaya orange cars from Woking. They now head to their home grand prix but as power is not their strong suit, they will have to fight hard to keep 3rd.

A big win for Alpine who were on song all weekend long with Fernando Alonso in 6th and Esteban Ocon in 9th. It’s a good points haul and moves them into 5th in the championship ahead of Alpha Tauri.

A fail for McLaren, despite the nice recovery drive from Lando Norris, who struggled for pace all weekend and managed to finish behind Ferrari losing 3rd in the Constructor’s Championship. Lando finished 10th while his teammate, Daniel Ricciardo managed 11th.

It’s hard to say that Mercedes failed, they just didn’t win but perhaps in their book, that is a fail. They tried several strategy moves to unsettle Max, which you would expect, but ultimately they just didn’t have the pace to beat Red Bull and maybe that’s the bigger issue heading into Monza.

I understand Sergio Perez did a nice job of driving back through the field to score points down in 8th but he should never had been in that position to begin with and his misstep during qualifying meant that Max had no teammate to counter Mercedes. He also had a crash at Spa that left him at the back. The only good news is that he changed engines and served the penalty.

A fail for Aston Martin who had a bad weekend and, like McLaren, just struggled for pace all day. A botched stop for Lance Stroll at the same time as George Russell didn’t help matters and Sebastian Vettel was recovering from getting balked in qualifying and starting toward the back.

With Kimi Raikkonen out due to COVID and Antonio Giovinazzi making an unplanned stop due to a puncture, it was a fail for Alfa Romeo who didn’t factor in the race all day and finished 14th and 15th.

Not sure what happened with Yuki Tsunoda or Nikita Mazepin prompting their DNF’s but both were really struggling all weekend and Nikita’s commentary about Mick Schumacher was a bit odd.

Also, I may be wrong but it did seem like the Williams divers, buoyed by their recent success, were over-driving their cars with both crashing in qualifying and then being left at the back of the grid on Sunday finishing 16th and 17 for Nicholas Latifi and George Russell respectively. Not the result they would have wanted and not sure where their pace went but then this track did neuter a few teams’ pace.

I did enjoy the radio banter from Mercedes to Valtteri telling him what to do and not to take cast lap. The tone of those conversations alone would tell you he is no longer a Mercedes driver at the end of 2021. 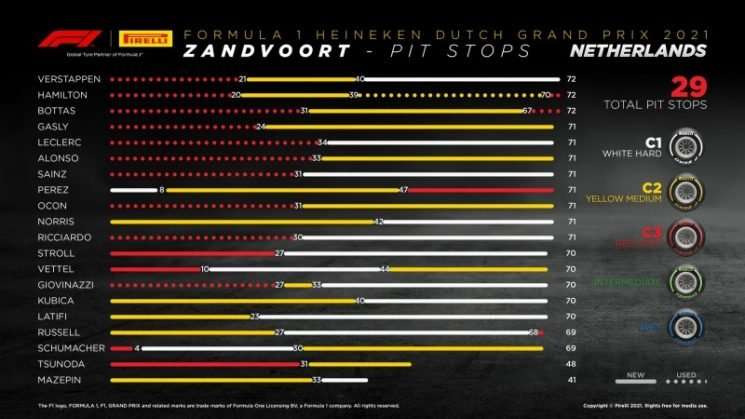 Take away the fans and that excitement (which was great) and you had an almost-impossible-to-pass BORING race. Mid fielders were amusing, Alonso standing out as usual. But, come on, this wasn’t Spa.

The twistiness of the track and the banking made it interesting to watch, but ultimately it was very processional, as everyone was about 1.5s behind each other.
Shame, I had hoped for more.

Previous articleVerstappen on pole for Dutch Grand Prix
Next articleBottas signs multi-year deal with Alfa Romeo
A terrific return to the F1 calendar for Zandvoort and the amazing Dutch fans who made the event such a spectacular day at the track. It may have been delayed a year but it was worth the wait. Negative CamberRace Report: Verstappen wins Dutch Grand Prix