As street circuits go, Baku in Azerbaijan is no walk in the park but Ferrari’s Charles Leclerc delivered an incredible pole performance. Unfortunately for him, Ferrari were not able to capitalize on his performance with an engine failure on lap 20. It’s a shame because he was fast and amongst the Red Bulls for a possible win.

Ferrari’s woes were exacerbated by a DNF for teammate Carlos Sainz on lap 9 and that’s a dual DNF for the team, a massive loss in points and looming penalties for taking new engines moving them beyond the three allowed engine changes during a season. In short, it’s a catastrophic weekend for Ferrari. Is that the end of the championship run for Ferrari? Some believe so but there is a long way to go and a lot can happen in F1.

The Ferrari’s failures seemed to plague Alpha Romeo and Haas as well but Red Bull were in full command with Max Verstappen taking the win followed by teammate Sergio Perez and George Russell.

A big win for Red Bull taking a firm lead in both the constructor’s and driver’s championship. There was a radio call to Sergio Perez to not fight with Max but in fairness, at that point Max was much faster on the Medium compounds and put over 2s on Sergio on the following lap after passing him. A strong 1, 2 result for the team who now have their foot squarely on the neck of the championship run.

A win for George Russell who once again was consistent despite struggling with massive bouncing all weekend long. George managed his bouncing and uncomfortable ride to a podium finish picking up the pieces of Ferrari’s failures. Lewis finished behind George and unfortunately for him, Mercedes stacked the stops during the VSC and it cost Lewis some time but a 4th is still a good result and great recovery drive from him given his car’s issues.

A win for Pierre Gasly who has struggled so far this season. He needed a good result to turn his season around and a strong 5th place is a terrific result despite his inability to hold Lewis off due to his tires being older than Lewis’s tires.

A win for Sebastian Vettel who recovered from an early error trying to pass Ocon to 6th. The team needed the result as Lance crashed twice during qualifying and retired from the race with a bad vibration.

A good result for McLaren and Alpine fighting each other with Alonso leading Ricciardo, Norris and Ocon to round out the top 10.

A catastrophic fail for Ferrari who suffered a dual DNF and serious points erosion. It also could create new grid penalties as the team will run into the 3-engine limit for the season. Charles is driving his heart out and the team are turning what looked like a strong title campaign into a damage limitation program.

A fail for Mercedes as it seems to me that there isn’t a magic point to “unlock the performance” of their car that Toto Wolff kept saying early on. The car is bouncing a lot leaving Lewis complaining of back issues and George saying it is dangerous. The crafted narrative and theater is Act 1 in a Play written by the team to lobby the FIA to mandate a minimum ride height. They have missed the mark and need to raise their cars but they know it will cost performance and put them further back. It’s a tough situation but in the end, other teams got it right and it’s not up to the FIA to regulate on the behalf of their deficiencies by penalizing the teams who didn’t suffer from bouncing in their designs. The issue is compounded by the budget cap limiting Mercedes in their ability to scrap the car and deliver a B-spec solution.

A fail for Alpha Tauri who managed to create a rear wing for Yuki Tsunoda that split in half with one part raising for DRS and the other half disinterested in moving at all and remaining shut. The race stewards gave them the black and orange flag and the team slapped gaffer tape on the joint and told him not to use DRS. A bit of a dodgy repair but it kept Yuki in the race.

A fail for Nicholas Latifi who got two penalties and managed to be last again.

Not sure what’s going on with the Ferrari engines but it could be an issue that transcends the works team as Haas and Alfa Romeo both suffered failures as well with Kevin Magnussen and Zho Guanyu both retiring.

Toto said before the race that Lewis may not be able to complete the race—due to bouncing and back pain—and was very adamant that ride height is an issue the FIA needs to address. Lewis’s dramatic car exit episode after the race leaves me thinking this is all feeding a narrative that Mercedes is hoping to press the FIA on. They want the FIA to cure their ills by making a regulation that cures their problems but limits their performance loss by decreasing competitors performance advantage. I’m not buying it, sorry. George didn’t hobble out of his car and he drives the same thing and both drivers are at their peak physical condition. Mercedes can solve this if Lewis is in pain…raise the rear of his car and take the performance hit. You built it, you race it in a safe manner.

I’ll admit, I’m not familiar with the Azerbaijan national anthem but that choir did a fantastic job and the harmonies sounded wonderful. 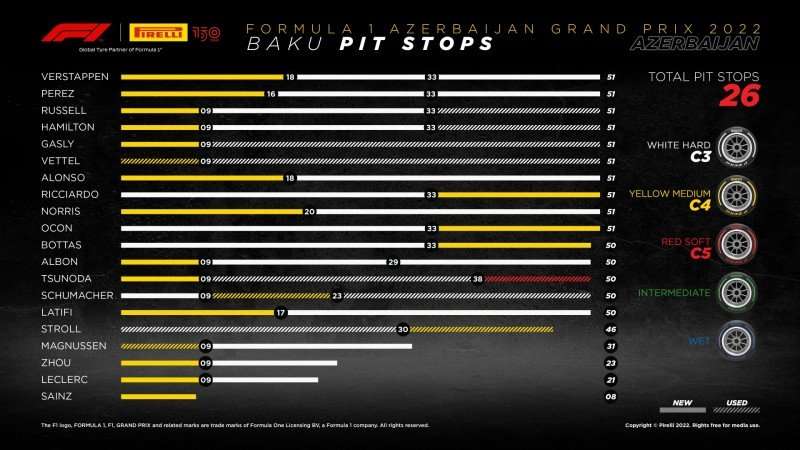 Remember back in 2014/2015 when most of the teams wanted to develop their engines during the season and Mercedes said, “you can do it during the off season”, guess what, Mercedes you can fix your car during the off season, in the meantime raise your ride height . What comes around, goes around. They can eat crow for all I care

I agree but I do think a valid role for the FIA would be to analyse the Gs in the cockpit and put a limit on the bouncing for the drivers’ sake. Like we’re not going to tell you what to do but we’ll tell you what you can’t do.

Am I the only one who’s surprised AlphaTauri didn’t take a huge penalty for taping their wing together and going back out after getting the meatball? wtf at 350kph?

I was surprised. I asked Paul about it on tonight’s podcast.

Previous articleLeclerc takes pole for Azerbaijan GP in Baku
Next articleAzerbaijan GP Review | The Parc Fermé F1 Podcast Ep 787
Race Report: Verstappen wins, Ferrari fails in AzerbaijanNot the most exciting race but it was key in the championship just like it was last year. IT may also be Act 1 in the Mercedes play called "FIA, please help fix our issues...what!!??, are you against safety??!!"